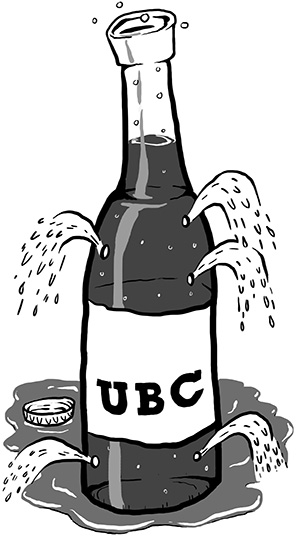 Vancouver (CUP) — At Kwantlen Polytechnic University, students hoping to learn the art of brewing beer can hop to it with a new two-year diploma program.

They’ll get to learn brewing techniques, science, and business skills to help them barrel into the beer industry.

While craft brewing has been booming across Canada for some time, there are scarcely any formal programs to teach would-be brewers the ropes. The first such program opened at Niagara College in Niagara-on-the-Lake, Ontario; in 2005, and in 2013 they partnered with Olds College to offer the program elsewhere in Canada. Outside of these programs, beer aficionados often learn the trade through home brewing clubs and other informal avenues. Others have gone abroad to countries like the US or Germany where programs have existed for some time.

Rather than tending to carboys in their bathtubs, Kwantlen brewing students will get to use a newly-constructed brewing lab at the school’s Langley campus. They’ll also get work placements at local craft breweries in the summer.

There are 35 spaces in the program, which starts in September.

But as this one door for fledgling BC brewers opens, another is closing. At UBC, some have been angling for a student-run brewery, but their hopes recently came to a halt when a referendum to fund the project was rejected by UBC’s Alma Mater Society (AMS), the school’s students’ union.

The initial plan was to put the brewery in the new AMS-run Students’ Union Building (SUB) building, which is currently being constructed. The plan was for beer from the brewery to be sold at the pub and restaurant inside the SUB, too, but student society finances have been tight in recent years, and the project was repeatedly tabled to a later point.

The new SUB brewery proposal had a deadline, though, as building the facility would’ve required changes to the already-in-motion construction plans for the building. As an alternative, brewery supporters proposed building it at the UBC farm instead, but the AMS refused to give any of their existing funds to the project.

Supporters then floated the idea of getting students to pay a small fee—from $2.50 to $7 over a number of years—to fund the brewery. But many of the program’s strongest proponents have graduated since the first proposal, and the AMS had been questioning whether a student-society-run brewery would be able to run as a profitable business. A vote to put the student fee proposal on a school-wide referendum ballot last took place in early January, and AMS council voted against it.

In the interior of the province, Thompson Rivers University is in the exploratory phase of putting together an educational brewery on campus with a local master brewer.

Facebook Announces Steps to Avoid Misinformation in 2020 US Election