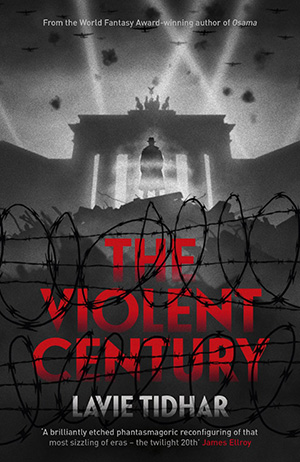 The Violent Century is the latest novel by the World Fantasy Award winning author of Osama, and Israeli/South Africa writer, Lavie Tidhar.
The Violent Century is a sprawling, whirlwind ride though the history of the 20th century as seen through the lens of a generation ‘Ubermensch,’ as they are largely known—beings who have been given superpowers thanks to a “probability wave” unleashed by the experiments of “Dr.Vomacht” in an imaginary 1930s.

The story is told through a series of vignettes hopping throughout space and time—from Stalingrad to Nazi-occupied Europe, from post-war Berlin to Laos and Vietnam. These vignettes are framed by a present day narrative in which we are introduced to the three main characters: Fogg, Oblivion, and The Old Man. The Old Man had recruited them in pre-war England to serve the Crown through the Bureau of Superannuated Affairs, a national security and intelligence Bureau that deals with the “Ubermenschen Affairs.” He has called them for a meeting many years later (in the present) for reasons that he is not completely open about in the beginning and it’s through this storyline that Tidhar weaves his enormous tapestry.

The action sequences felt faithful to the superhero comic book milieu that it draws from. While it can be as bloody and grisly as the tumultuous events which serve as the backdrop, it still recalls the fun and sense of adventure of the Chris Claremont years of The X-Men.

Still, though, the beating heart of this book is its attempt to not just capture and harness the energy of the genre but its attempt to approach it with a kind of literary sensibility.

As we follow these supermen through history as they serve one government or another, hunting Nazis or helping them escape in exchange for intelligence or technical expertise, or participating in Jewish Partisan resistance in Transylvania (led by the very cool “Drakule”), the reader slowly becomes aware that they only seem to be concerned with each other. Each agency, bureau, or organization that recruits them has them mainly focused on observing, assassinating, or kidnapping other nations’ superbeings.

Each nation styles them and presents them to the public in ways that reflect their own overarching ideologies and cultures, and each nation seems to invest heavily in their superbeings, if only as a counterweight to other nation’s Ubermensch. Yet as powerful as they are, and, as The Old Man says to Fogg and Oblivion in one section, “as long as both sides have you, you cancel each other out.”

A science experiment produces a generation of near-ageless superbeings, governments respond, align them to their own national mythologies, recruit them into World War II, the Cold War, Nazi Hunting, narcotic trades, the Afghanistan resistance to the Soviet occupation, creation of the Mujahideen and rise of Osama Bin Laden, and the War of Terror. With the exception of this added fantastic layer, nothing really changes. The history of the 20th century as we know it remains largely the same. The novel alludes to this at one point in a WWII section when Fogg and Oblivion are talking about what they would have done if they hadn’t been changed and the one notes to the other that as different as their life might have been, it wouldn’t matter because they’d still be in the war.

This is where we are introduced to the main concern of the book—not just deconstructing our desire for supermen, whether they be psychological or cultural, but undermining their very agency and potency. The Ubermensch cancel each other out, they change nothing. The sheer weight of the social, political, strategic, and economic forces at work in an industrialized world of advanced nation-states (in all their best and worst manifestations) ultimately subsume the Ubermensch—they are, in many ways, as adrift in the sea of conflict and historical reversals as we are.

They have epic battles and do spectacular things—die, kill, get sent to totalitarian “camps,” and fall in love against the backdrops, yet they are only going through the motions of history, completely helpless to shape it. As individuals, they are far more powerful than any normal person, yet for that very reason are condemned to live through each atrocity while achieving very little—all the “Sound and Fury” of the 20th century dressed up in spandex and given ridiculous codenames.

Ultimately, in The Violent Century, we are given a fast-paced, engrossing, beautifully attenuated portrait of the absurdity of the “Superman” in the 20th century in both its ideological, mythological, and popular contexts. Superbeings and Ubermensch, imaginary or otherwise, are not the driving agents of history, but participate only alongside it as a sort of Sisyphean sideshow-shadow-puppetry amidst the carnage.