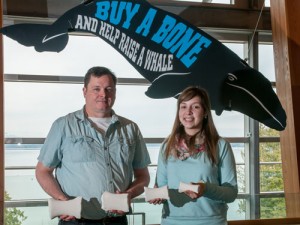 VIU is launching a “buy a bone” campaign to raise money for a Grey Whale exhibit.

The university needs to raise approximately $75K to create a world-class Grey Whale skeleton exhibit at the Deep Bay Marine Field Station in Bowser. The station is a key research facility for VIU with a mandate for public education around sustainability in coastal communities.

“The whale skeleton, which will hang from the ceiling, will be a highlight of the Deep Bay Marine Field Station’s public education program, and inspire and educate community members for decades to come,” said Manager Brian Kingzett. “We need the community’s help to make it happen.”

The bones come from the remains of a ten-metre long, 20-tonne grey whale that washed up on a beach in Sooke in April 2010.

Scia’new First Nations worked with Fisheries and Oceans Canada as well as VIU to bury the whale on their land with hope that it could be used in the future for an educational purpose.

After four years of natural decomposition, the whale skeleton is ready to be recovered and prepared for display. Kingzett estimates it will cost approximately $75K to properly recover the skeleton, prepare the bones, and create a permanent exhibit.

VIU is working with Saltspring Island-based company Cetacea to help with the bone articulation process.

“Cetacea is gaining an international reputation for the quality of their articulations that feature their subjects in a life-like pose,” says Kingzett. “They are best known for articulating a blue whale, the largest species in the world. It’s a combination of science, engineering, and art. Intensive cleaning processes are required, and oils must be removed from the bones before they are assembled into a natural looking display.”

The completed skeleton will weigh approximately two thousand pounds, and Kingzett says the project will present “considerable opportunities for volunteers and students during the process” and is intended to be a community project.

Donors will receive a certificate of “bone ownership” signed by Dr. Ralph Nilson, VIU President & Vice-Chancellor, and an invitation to the exhibit preview party. To donate or get more information, visit  viu.ca/whale or viu.ca/deepbay.