Air Carnation, Guadlupe Muro’s debut novel, is a trans-genre work that blurs the lines between creative mediums of all types in its exploration of individuality, love, and what it means to be a creative person. Beginning with diary-entry style non-fiction, and travelling on through song-like verse, allegorical and autobiographical fiction, and always tinted through the lens of emotional prose poetry, Air Carnation is a captivating journey through human growth and the sense of self—it is a book that feels like the womanhood of its author condensed in a physical form. 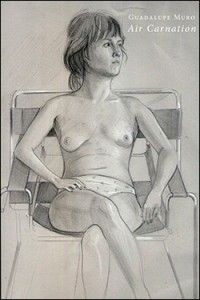 Air Carnation is a book of a wide array of pieces. The narrative (inasmuch as a life can be a narrative) begins in Muro’s childhood, exploring the memories she has kept close to heart and is now reflecting on. From here, the novel proceeds at a frenetic and non-linear pace—we jump from the past to the future and back over and over again, from Argentina to Buenos Aires, and even all the way across Canada by the time the thread of a real story begins to reveal itself. This seems like a merciful way of allowing us inside Muro’s head—her thoughts alternate between the ridiculous and the morose, plunging from the hysterical depiction of sperm as warriors on a suicide mission into the womb, to the moroseness of an existence trapped by the perpetual longing to create, always feeling trapped by the insufficiency of expression.

In the latter, it’s obvious Muro is being too hard on herself—almost every snippet-like entry in Air Carnation contains a worthwhile phrase or thought so packed with prose-poem meditations and aphoristic rambling that it’s difficult to find a place to disengage from the storytelling: lines like “Nobody writes a diary hoping that no one will read it” (25) and “A pregnant woman is a woman who cannot escape for herself” (43) are littered on almost every page. The only real respite seems to come in the middle (or Intermezzo) section of the book: “Songs For Runaway Girls.” Here, we’re taken through a suite of Muro’s song-style poetry, ringing more of Lorca and performative singing than the rough, cutting edge of Muro’s prose observations. Though interest might wane towards the end of this section, Muro is ready to pull us back in with a shuddering switch in perspective—from her own head to the life of a girl named Rita, who seems to be a confusing amalgamation of fictive influences and moments from Muro’s own personal history.

The reason for the switch in narrators isn’t immediately clear, however, though it becomes apparent as the book’s closing chapters go on that Rita’s story is a much more linear and cohesive one than Muro’s own. The problem with this shift is purely in its inconsistency—while experimentation is regularly admirable, it feels like we’re given just enough time to fall in love with Muro’s terse but engaging prose style before it’s wrenched away and we’re thrust head first into long, far less insightful chunks of storytelling, fresh from our bath in the alienating simplicity of the intermediary poetry section.

The latter sections of Air Carnation aren’t without merit—the theme of love and relationships that Muro dances in and around throughout the book become fully realized as the narrative arc swings low towards the finish line; Rita is still an insightful and engaging character with the same capability for surrounding quotable quips as Muro herself. As we’re told midway through the languid pace of Rita’s latest relationship and surrounding complications, “We make our own movie of our lives…and there are good and bad scriptwriters” (140).

As a debut novel, Air Carnation isn’t without its flaws; the inconsistent tone, focus, and pacing of the writing threaten to overwhelm and drown the noteworthy bits. Luckily, Muro’s prose is packed with enough poetic power and language mystique to maintain interest throughout the entire book, even when her more personal musings and revelations are abandoned for a simulacrum thereof. Air Carnation is a complex, powerfully feminine collection of insights and stories about simply being a person—about the flashes of insight that loom in the moonlit sky at night, and in the petals of flowers as they burst from the earth. It’s a book worth anyone’s notice—and, more pressingly, their complete attention, if they can manage it.

Mobilizing the March for the Climate

Why Ello is Dumb and So Are You