Jazz lovers are invited to enjoy three nights of great music at VIU’s Spring Showcase Concerts, coming to the Malaspina Theatre April 7, 8, and 9 at 7:30 pm. Concert admission is by donation.

“The Spring Showcase is an opportunity to hear music played by our talented students and some special musical guests from the community,” said Music department chair Bryan Stovell.

VIU Jazz Combos take to the stage on Wednesday, April 8, under the direction of Pat Coleman and Ian Sinclair. They’re joined that evening by the Nanaimo Music Association’s (NMA) Big Band, directed by Stovell.

It’s all about vocal jazz and fantastic choral music on Thursday, April 9, with the College Singers, the Vocal Jazz Ensemble, and special guest A Cappella Plus, all directed by Rosemary Lindsay. The A Cappella Plus chamber choir has been performing at community VIU’s spring jazz concerts showcase student talent events and festivals on Vancouver Island for 35 years. 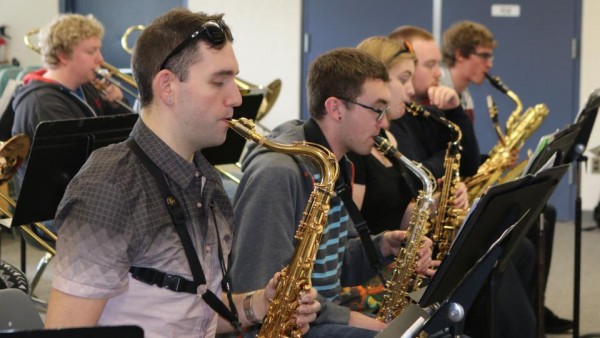 Stovell says music lovers will be impressed with the musical talents of both students and musical guests, and credits the strong connections between VIU and Vancouver Island’s music community for the high calibre of performance.
One example is a collaboration between fourth-year Bachelor of Arts in Jazz Studies student Jesse Marshall and the NMA Big Band.

“We’re going to be playing some of Jesse’s compositions and arrangements in Wednesday’s program,” Stovell says. “It’s somewhat unusual for a student to write arrangements for a big band—it’s a lot of work for him, and clearly a passion.”

Jazz Studies graduates go on to pursue a variety of careers in music on a part-time or full-time basis, Stovell says, with many becoming self-employed to pursue opportunities that range from teaching, performance, orchestra positions, musical theatre, self-production and promotion of original music, and music composition for films, videos, games, and marketing.

Stone and crystal eggs for Spring