Out of Addiction and into Education

When Jordan Reed’s parents tried to talk him into moving to Nanaimo from Vancouver to attend a treatment centre for his problem with drugs, Reed resisted by using the tactics he knew best: anger, hostility, and manipulation.

He thought he could beat his addiction on his own—an idea that is seemingly universal among addicts and alcoholics.

As his life became steadily more unmanageable, he eventually gave in to the pressure and decided to accept the help they were offering.

Now, with over 15 months of sobriety, Reed’s life has transformed from a state of hopelessness into a life of direction and purpose.

According to the Canadian Centre for Addiction and Mental Health, one in five Canadians experience a mental health or addiction problem in any given year.

Although Reed, 28, falls into that statistic, he doesn’t have a stereotypical drug addict story. He didn’t grow up in an abusive home or a life of poverty. Throughout his active addiction, he never resorted to crime to support his drug use. He even completed a Bachelor of Arts degree at UBC, with a major in psychology and minor in philosophy.

But no matter what his childhood or upbringing may have looked like, he eventually became afflicted with the mental obsession to use drugs at any cost to change the way he felt. The emotional turmoil it caused was unbearable.

As his drug use continued to escalate, every aspect of his life became unmanageable. He couldn’t hold down a job. His mind was in a constant state of obsession, and maintaining meaningful relationships with friends and family became impossible.

Reed’s parents could tell that something serious was going on. The lying and erratic behaviour were all out of character for their son. They offered him the opportunity to attend Edgewood Treatment Centre in Nanaimo. At first, Reed had no desire to get treatment for his addiction. 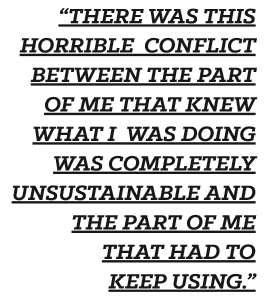 “My parents were trying to push treatment on me pretty hard, and I was doing everything I could to resist,” he says.

“One strategy I would use is to get extremely angry and hostile. I would manipulate them, and blame their worry on stuff that was going on for them.”

Reed finally did agree to come to Nanaimo for treatment, and it was more because he wanted an escape from the insanity of his daily life than anything.

“My life was not going well, and I revelled in the idea of escaping to another place. I don’t think I would have been cool going to treatment in Vancouver,” says Reed.

“Now I am super grateful my parents did what they did.”

Reed spent five months at Edgewood, where he completed both the inpatient and extended care programs. After his stay at Edgewood, he decided to permanently relocate to Nanaimo. Now with over 15 months of sobriety, he continues to attend weekly group therapy sessions at Edgewood and regularly attends 12-step meetings. Reedt is amazed at the complete transformation of his physical, mental, and spiritual health, and the hope that has been restored to his life. “The biggest thing that has changed has been my relationships and how they are way more genuine and honest. I can share with people what is actually going on and I don’t have to constantly be lying,” says Reed. “I have promise in my life. I see a bright future for myself, whereas before I didn’t. I don’t have that impending sense of dread.”

Reed says he is grateful for everyone who has helped him and is adamant that he needs to give back in order to maintain his sobriety. “One thing that really helps me stay sober is doing service and volunteering. In my active addiction I definitely felt separate from, rather than part of. I also did some volunteering at VIU in an ESL classroom, and that was really helpful, feeling involved, feeling part of—not feeling separate from or isolated,” he says.

In January, Reed began attending VIU. He says one of the best things about the university is the amount of people there in recovery from addiction.

“I was on Facebook in the computer lab to track people’s numbers down to call them up to make amends and I was super nervous. As soon as I would start typing a message to get a phone number, I would look up and I would see someone in recovery walk by. That was kind of like a God shot for me, and gave me the strength to get tha 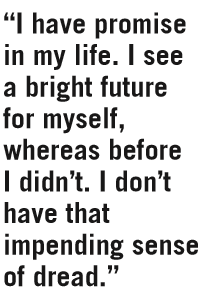 t number to make that amends.”

Reed began the Bachelor of Education, Post Baccalaureate degree program this fall with hopes to pursue his goal of becoming a teacher.

He says he feels blessed to have built a new life in Nanaimo and for the opportunity to become a teacher, but feels the biggest gift of all is the loss of his daily obsession to use drugs. “It’s completely liberating. I feel like a human being again,” says Reed. “Active addiction is slavery, so to not have that monkey on my back, it’s reason to believe in God.”

Names have been changed to protect identities.

Spenser is a journalist, poet, and wildlife photographer. His work has appeared in Maclean's, The Malahat Review, The Puritan, and Prairie Fire.