It was five minutes before 10 am, September 3, on an otherwise unremarkable Saturday morning in Nanaimo’s downtown core. Outside of That 50’s Barber Shop on Victoria Crescent, however, stretched a lineup of children eager for back-to-school haircuts and school supplies. The reason? This was the 2nd annual Fresh Start charity event whose aim is to alleviate back-to-school pressure for parents of kids five to 17, and ultimately, for the kids themselves.

“People say to me, ‘I don’t think there’s much poverty in Nanaimo,’” says barbershop owner Dave Lawrence. “My reply is, ‘Don’t you see it?’”

According to a 2015 report released by FirstCall: BC Child and Youth Advocacy Coalition, child poverty rates in British Columbia are 20.4 percent compared to the national average of 19 percent. According to the same report, Nanaimo and Campbell River have a 23 percent child poverty rate—almost one in four children. Duncan and Port Alberni have the two highest percentages in the province at 31 percent. Of the urban areas reported on Vancouver Island, only Victoria has child poverty levels below the provincial average at 16 percent. Shockingly, for BC children living in lone-parent family homes, 50 percent of them live in poverty.

“I grew up with a single mom and know how hard it is,” Lawrence says. “Financially, I definitely struggled.”

Lawrence, who used to get haircuts at the barbershop he now owns, hopes that Fresh Start will “open people’s eyes.” Gord Kennedy, who brought his daughter to get her hair styled, expressed his gratitude. “Today has really driven me to give the shop more business,” he says. The Harewood father had his hair cut the week before and had asked about the children’s backpacks, which ultimately led to him bringing his daughter to the event. 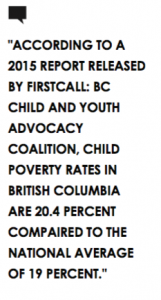 People began to line up as early as 8:30 am for the event that ran from 10 am to 3 pm. Sonya Scott was at the front of the line with her son Chase, who expressed that they were “always early for everything.” Scott said she had heard about the event from a friend whose son got his haircut at the shop and wanted to show her support for what she believes is a great cause.

Lawrence and long-time friend Megan Hamlet organized the event last year as a way to help the community. This year, hairstylist Karly Sue Menzie also joined them. Many other volunteers including actors and other performers signed up as well.

“I read a post about a barber doing a similar thing on Facebook and told Dave,” Hamlett says, explaining how Fresh Start got started. “He was offering haircuts to kids in exchange for them reading to him.”

Iowa Barber Courtney Holmes received national coverage last year for launching the initiative to his community of 58,253. For every kid who read to him, he offered a free back-to-school haircut. Anderson Sainci, who organized the event, told People magazine that their motive was to “help change the narrative for low income and particularly people of color [sic].”

Fresh Start is an amalgamation of the two ideas, branded specifically for Nanaimo who has a current population of 83,810.

“School is hard enough,” hairstylist Karly Sue Menzie of Cutting Room creative says, “nevermind the bullying and social anticipation of fitting in. Fresh Start allows us to freshen up their minds and hair, and as a bonus, because we live in such an amazing community, we are able to give them a backpack and school supplies to help them get the year started.”

Threadscape Custom Embroidery volunteered to make the Fresh Start t-shirts worn by Lawrence, Hamlet, Menzie, and the hoodies that were worn by their children.

Lucid, on Commercial Street, raised $400 by selling donated vintage hats at $10 each. Owner Fred Jeffery, who described the idea of Fresh Start as “perfect,” also volunteered to hand out backpacks and school supplies.

Much to the delight of everyone in line, Little Tales Princess Parties had three “princesses” on site to entertain the children: The Glass Slipper Princess, Brave Princess, and Tinker Fairy. Owner Melissa Ball said that the ladies’ identities would remain confidential to retain “the magic” for events to come, but said that the women had volunteered their time for the cause as well.

Hired Guns Creative graphic designer Kristen Dullum was also on hand painting children’s faces. She expressed her interest in getting involved, purchased face paints with her own money, and set up near the tent where school supplies were being handed out.

Other volunteers handed out packs, supplies, and even snacks. The Vault Café donated dozens of fresh baked cookies, and Mambo’s Pizza—who also gifted backpacks—gave out pizza to those who had been waiting for a haircut for hours. People in line even got involved.

“So many people and businesses donated,” Lawrence says, “that it is hard to thank everyone. Lots of gifts were given anonymously and a lot of people who gave were customers.” Last year, Lawrence ended up giving out 60 haircuts. Amazingly, he had exactly 60 backpacks on hand with school supplies.

“What are the chances?” Lawrence asks. “60 haircuts and 60 backpacks?”

With much more time to prepare, the media coverage was far more substantial, which meant news of the event spread.

“I got a message from a barber in England offering support, and a teacher from Saskatchewan sent me a letter,” Lawrence says. “CHEK News, CTV, and the Nanaimo Bulletin have been covering the story. We also had customers, businesses and other members of the community sharing the event on Facebook.”

With no idea what to expect, Fresh Start had 200 backpacks on hand with a contingency plan to get more if needed. Lawrence had decided that if there was still a lineup when the event was over that no one would be turned away.

By the end of the day, Lawrence and Menzie ended up giving 75 haircuts.

“Some of the kids told me how happy they were, “ Menzie says, “because it was their first real salon experience. I am very excited to do this every year.”

Hamlet says that the items leftover would be donated to schools for children in need.

“We hope to do this every year,” Lawrence says. “I hope, with the Victoria Street Association’s support, maybe next year we could shut down a part of the street, have a stage and a bouncing castle.”

In a passionate video message on Facebook, Lawrence shared his gratitude for the community’s support, “I’m amazed at how generous the people in Nanaimo can be, amazed at all the businesses who donated, amazed at all my friends who helped with this, and I’m amazed at what you can accomplish when you put your mind to it.”

Op-ed: The streets of Nanaimo