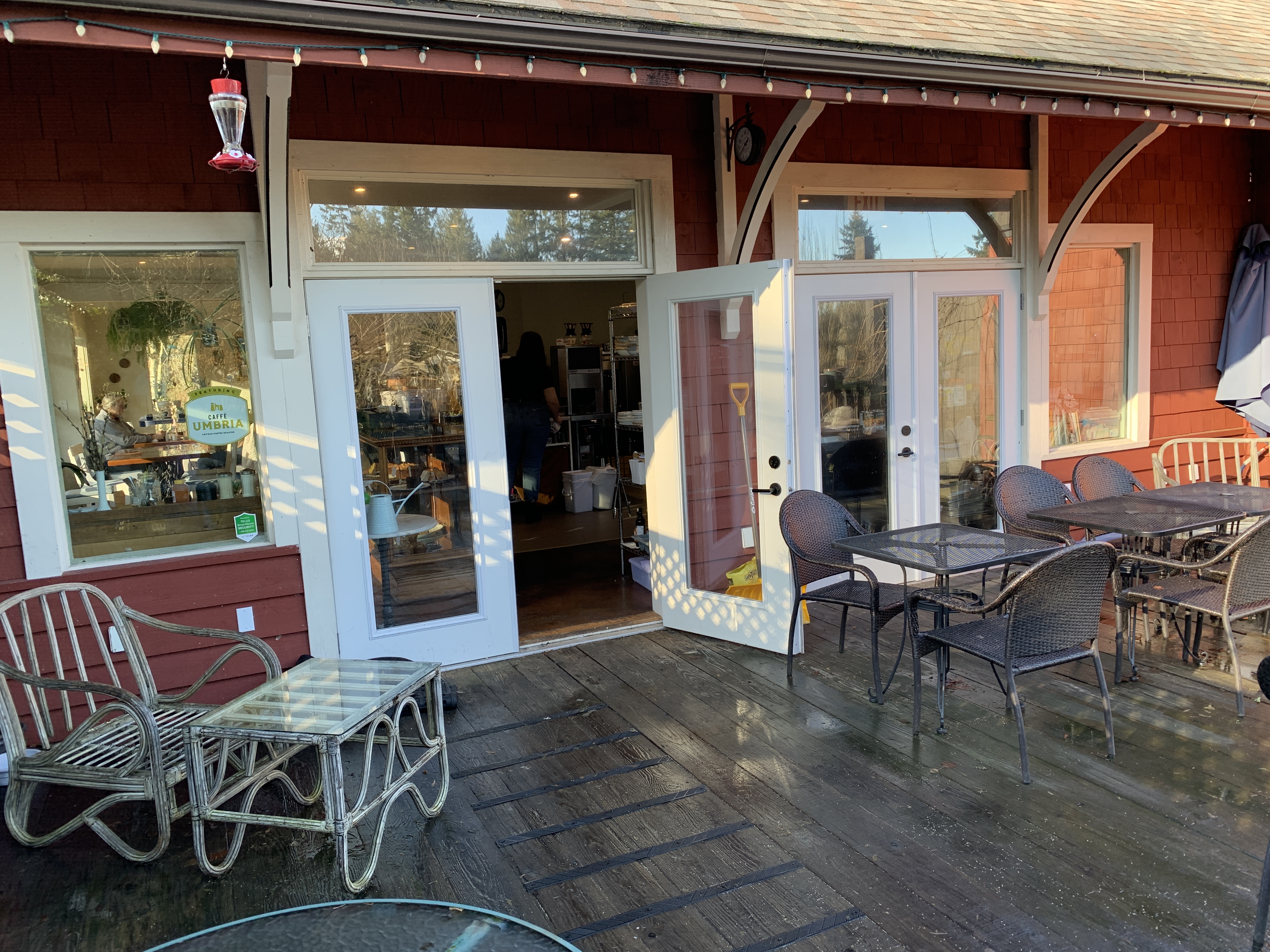 Chemainus Road is a long, winding drive that connects the small town of Ladysmith to the even smaller town, Saltair, and eventually, Chemainus itself. Amongst the long straight stretches and the twists and the turns, there is a hidden gem located on the corner where Chemainus Road forks into Willshire Road: Ma Maison restaurant. For the monolinguistic, Ma Maison translates to “My House.” While the “My” in this case refers to the experienced—a major understatement—chef and owner, Lauren Cartmel, it can also be applied to any of the guests that visit the ever-inviting cozy restaurant.

At first glance, the building might look like any other West Coast structure, but the unique glass garage-style doors work as a magnet for curiosity. If the packed parking space isn’t enough to grab your attention, then possibly the smooth cursive on the hanging sign out front spelling out the restaurant’s name might.

Stepping inside Ma Maison is reminiscent of visiting an older relative’s home as a child; although a strong bond is lacking, you can’t help but feel welcomed. There is nothing extravagant or over-the-top about the restaurant’s decor, however the aesthetic radiates whimsy. Even the restrooms are inviting and gender-inclusive. Perhaps it is the simplicity of the atmosphere that is so mesmerizing; although the light showers of the average Island weather are prevalent, the sun provides excellent natural lighting to the space.

Simplicity is a constant at Ma Maison as Cartmel and her team cook with a farm-to-table style. Cartmel describes this as utilizing what is available, and cooking seasonally, which can be difficult considering the sporadic weather patterns of the Island.

“Our lettuces come from a farm in Mill Bay, we use Bird’s Eye Cove farm eggs as well as Farmer Ben’s,” Cartmel said. “All of my baking is organic. I use the true grain flour for all of our baking, and just stuff like that.”

Cartmel said the importance of cooking farm-to-table style, to her, is quality.

“When you use something that is grown in season, it tastes so much better,” Cartmel said. “When you eat a strawberry in the summer, compared to eating one in January, the one in the summer just tastes amazing…just quality.”

The menu boasts a wide variety of breakfast options, lunch dishes, and baked goods. Because Cartmel also runs a catering business, the restaurant’s operating hours are limited to 8 am–5 pm from Monday to Friday. However, Ma Maison opens on holidays, and Cartmel hosts a special dinner event once a month that customers can purchase tickets for.

Cartmel’s favourite dish on Ma Maison’s menu is the Chicken Waldorf, and she notes that her restaurant is fairly casual in comparison to many of the fine-dining places she has worked prior.

“When I envisioned this restaurant, it was just somewhere where I would come and eat a couple times a week, whereas if I worked a restaurant, I would go once a year.”

Cartmel always knew she wanted to open a restaurant of her own one day, and her vision goes back to the beginning of her culinary career. Although born in Winnipeg, Manitoba, Cartmel was raised in Ladysmith.

Through the VIU—then Malaspina—culinary arts program, Cartmel did a stage (rhymes with minaj) for a week for one of the top restaurants in Vancouver. This is the culinary equivalent of an unpaid internship. The restaurant then hired Cartmel, so she graduated early and moved to Vancouver where she would remain for about seven years.

“It was a really great program; I’m so glad that I went there,” Cartmel said. “They really instilled a sense of hard work and professionalism.”

Following her time in Vancouver, Cartmel had a two-year stint working at the self titled restaurant Gordon Ramsay.

“I moved to London and I worked for Gordon Ramsay at his flagship restaurant, which was three Michelin starred. It was the number one restaurant in London and number four in the world,” Cartmel said. “It was really hard work, but I learned more in six months there than I learned in six years of working, which is very intense but an amazing learning experience. So, it was worth it.”

It was in London when the name “Ma Maison” came to Cartmel, but she was waiting for the right time to open up a restaurant of her own.

“And then from [London], I moved to [Los Angeles] and I worked at the Beverly Hills Hotel,” Cartmel said. “I was there for about seven or eight years, and I ran the restaurant. I was the chef de cuisine, so I was the restaurant chef within the hotel.”

Cartmel highlighted her time in Los Angeles as being really fun and her favourite of the different destinations she worked at. There, she spent about a decade catering to a plethora of high-profile guests, such as Leonardo DiCaprio and Janet Jackson.

“I really cooked for everyone, but Oprah was really amazing, and then Gor Vidal, who is passed away now, became friends with me. He was just very eccentric and interesting and would come in and I would just sit with him and he would tell me all these stories. He was a really cool individual,” Cartmel said.

When Cartmel had her two children, she decided to return to her Island roots. Eventually she would open the restaurant on March 13, 2019. When looking for a location for Ma Maison, she searched from Nanaimo to Victoria.

“I was trying to find the right spot. I love Saltair; right by the ocean; it’s really beautiful and great patio. It just had everything,” Cartmel said.  “There was a nice space, great patio, whereas Victoria was super expensive. Nanaimo; I couldn’t really find the right location. So, it kind of just worked out.”

Despite her impressive resume, Cartmel is humble about her stature in the culinary discipline. Samantha Elkiw, line cook at Ma Maison, said that she was excited to work with someone that was experienced and also a woman.

“We are currently an all female staff, which I think is pretty big in the industry,” Elkiw said. “Our servers are all females, Lauren and I are in the kitchen. It’s very uncommon, that I’ve ever seen or heard of, that you have a female dominated kitchen.”

Similar to Cartmel, Elkiw grew up in Ladysmith, got serious about cooking in high school, and went through VIU’s culinary arts program. She said she loves working at Ma Maison, and she has been working there since its opening. She also praised Cartmel for keeping such a relaxed environment, and hopes to see more women in the discipline.

“Lauren really trusts me and I get a lot of freedom to do what I want in the kitchen, which is really nice as a cook and aspiring chef,” Elkiw said.

Whether it was a conscious decision or not to take on an all-female staff, Cartmel can be looked at as a role-model for other aspiring chefs and women coming up in the world. Among her many accolades, her interview at Gordon Ramsay stands out.

Cartmel remained firm, and she blazed her own trail. Although Cartmel learned plenty in her time working with the Master Chef, Elkiw notes that Ramsay’s personality in the kitchen did not rub off on Cartmel.

“[Cartmel is the] complete opposite,” Elkiw said. “She’s like the nicest, kindest person.”

Ma Maison’s most popular item reflects the relaxed atmosphere of the restaurant and the staff, which Cartmel and Elkiw agreed was the turkey club. Although Ma Maison’s turkey club isn’t simple, it is not overly extravagant either; it flows with the vibe perfectly.

“I love the spaciousness and natural light,” Demeul Emaere said. “I like it,” Kersting agreed.

Cartmel’s career appears to have been fast-paced from the start, and with the number of customers she and her team serve every day, it looks as though she has no plans to slow things down. For the students currently enrolled in VIU’s culinary arts program, Cartmel said:

“Work very hard and never give up.” 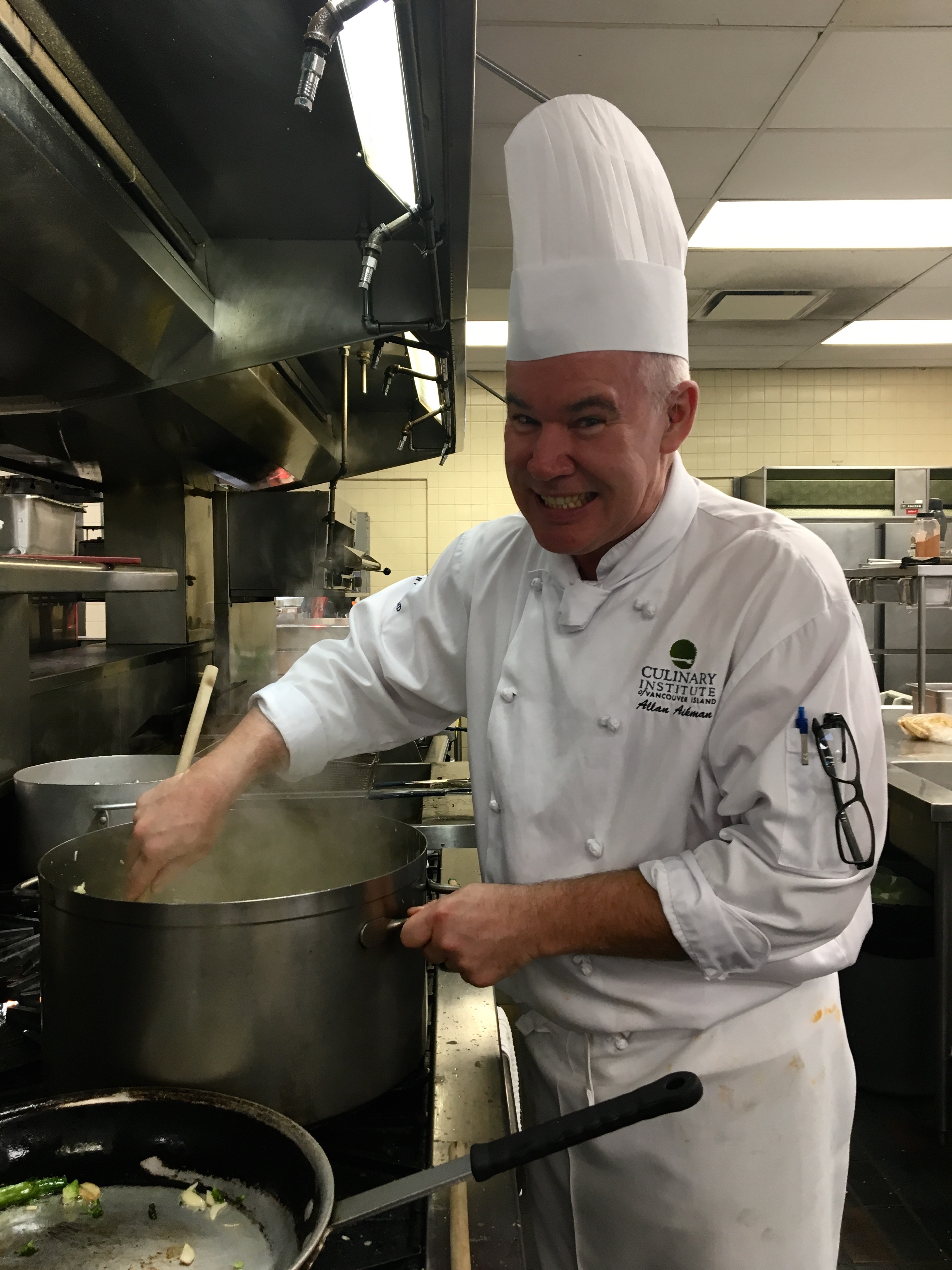