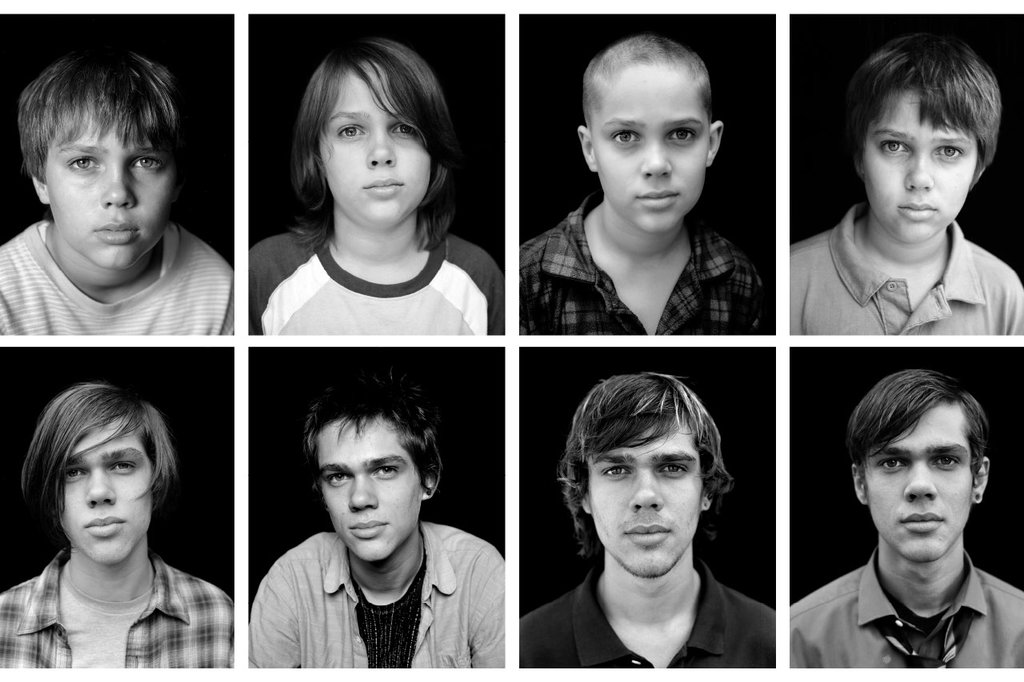 Transformation of Mason (Ellar Coltrane) in Boyhood. Courtesy of dreamsandvisions.squarespace.com

Contributor Spencer Wilson dives into the highest rated film of the year–one that took 12 years to make.

It’s easy to hear about this film and think it will come off as a gimmick: a film following a boy from ages six to 18 which uses the same cast to depict the process of aging. Thankfully, the reality is that Boyhood is a remarkable experience to witness on film.

Watching actors grow up on screen isn’t a new concept to film, the most historical example being François Truffaut’s films about the character Antione Doinel (played by Jean-Pierre Léaud), which began with The 400 Blows in 1959 and continued with films in 1962, ‘68, ‘70, and ‘79. There’s also the Harry Potter series, which director Richard Linklater makes reference to early in the film when the kids are being read the Philosopher’s Stone before bed, and again when they are older and going to an opening night release of the Half-Blood Prince. Those familiar with Linklater’s earlier works will know he is no stranger to depicting the evolution of people on-screen with his Before trilogy, but what sets it apart from any of the previously mentioned is that we get to witness the entire process presented as a complete narrative in two hours and 40 minutes.

Annually, for 12 years, Linklater assembled the cast and shot a 15 minute short film over the course of three days. He edited the footage each time they shot and then pieced each part of the film together. This included the music, which he carefully used to punctuate the years as they passed, and it brings you along for the ride.

The story progresses in a linear format, beginning with the boy, Mason Evans, Jr. (Ellar Coltrane), at age six in primary school, and then ending with him at college as a freshman at age 18. Alongside him we get to see his older sister, Samantha (played by Linklater’s daughter, Lorelei), grow up as well, but the focus is always on Mason and his personal perspective. At the beginning of the movie, we find out that Mason’s parents are divorced and the kids mainly live with their mother (Patricia Arquette) and visit with their father (Ethan Hawke) on weekends. Their mother moves frequently throughout the film as she tries to find affordable living while also trying to complete her master’s degree to teach psychology. Meanwhile, their father works as a musician and tries to remain a meaningful presence in their lives by giving them as much life advice as possible when they’re together.

The changes in Mason are very subtle. Linklater does an excellent job of not drawing attention to Mason’s aging process with obvious cuts between showing his face one year and then the next, or showing 12 different birthday scenes—it flows seamlessly from one event to the other. In fact, the film is so excellently paced that it is hard to believe how many years have passed by the time it’s over. The choice of events feel natural, as if the film is showing Mason’s own memory of which events mattered to him.

Therefore, you won’t see predictable scenes that you might expect to see in a movie about a boy growing up and going to college, like a high school graduation. In an interview, Linklater spoke of his own graduation, saying “it was boring, and I was an extra in a big event, and there was nothing personal about it. But I do remember being in a car with my buddy Danny, and he had a drink, and we were kind of farting around afterwards.” The film then becomes this combination of Linklater’s growing up, and Coltrane’s own contributions to the character. The idea works perfectly, because we are left with many small, character-building moments in between periods of furious drama. Sometimes they are very small and quiet, like Mason finding the skeleton of a dead bird when he is six; sometimes they are very startling and dramatic, like when his alcoholic stepfather goes on a drunken rampage; and many times he’ll be given stereotypical male lessons on things like catching a football and shooting a gun.

As a character, Mason isn’t perfect. He starts off as a daydreamer who always forgets to hand in his homework. He’s always looking out windows and we’re given a sense of his disconnection with the world beginning at a young age. As he gets older, his procrastination with school continues as he makes time for video games, friends, and, later on, photography. He begins engaging in the usual rebellious teenage activities of getting drunk, smoking pot, and staying out all night. Throughout his life he sees adults, specifically his parents, struggling to find their own meanings in life, and it seems to perpetuate Mason’s own dissatisfaction with what the world has offered him so far.

As a character, Mason isn’t perfect.

Linklater has always been good at capturing people and ideas from a certain generation within his films, and Boyhood is no different. Mason comes across as a representation of the current generation of youth, which is amazing considering he manages to accurately depict the stages of Mason’s growth in an organic way. The strength within this, is, the film doesn’t feel like it’s celebrating youth or condemning them for being irresponsible in any way—it simply shows the events of a boy growing up. When combined with great writing and acting, it almost feels like a documentary.

The actors are fantastically convincing. Arquette perfectly portrays the stress of raising the children alone, with Hawke trying to act cool and spout life philosophy like he does in some of Linklater’s other films (Before trilogy, Waking Life). But the kids stand out the most. Coltrane and Lorelei are naturally talented and play their characters very well despite having to basically grow up with them. This is aided by a screenplay that constantly evolved with the characters to make all their conversations feel real. Mason has many moments of awkward conversation and mumbled begrudgery that makes him sound like a real character.

Overall, Linklater does a great job keeping everything understated. The moments and their conversations feel real; the directing is linear, but not too linear to be unimaginative; and the overall construction is brilliant. When the film is over, it feels disorienting to have experienced so much in one film, and yet feels like it wasn’t crammed together. It’s a very contemplative film and a perfect representation of human memory. Do not miss this extremely unique cinematic experience.