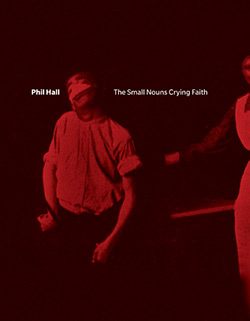 Diving into any title published by Book Thug always comes with a mix of fear and excitement. The small Toronto press, run by Jay MillAr, added Governor General award-winning poet Phil Hall to their staff as poetry editor shortly after releasing his 2013 collection, The Small Nouns Crying Faith. In addition to his GG prestige, his work has been shortlisted for the Griffin Poetry Prize. Hall carries impressive clout as a poet and instructor.

When I picked up a copy of The Small Nouns Crying Faith (Nouns for short), the cover page itself confronted me immediately. The surrealist red-shifted man pictured on the burlap-like paper puts the reader on alert that there won’t be any friendly, happy moments inside. After repeated readings, I can say that it’s absolutely right. Phil Hall’s poetry is not the stuff of inspirational cantos or cozy nights at home. It’s about the wounds language leaves in the soul, and the experiences of assembling that grief into something resembling music.

it’s about the wounds language leaves in the soul

With only a few other collections of Hall’s earlier work under my belt, I wasn’t entirely sure what to expect in Nouns. It’s obvious Hall has done his time composing the sort of poetry we’re used to and, as such, plays with composition, form, and syntax any way he chooses. Poems in Nouns constantly jump in and out of italics and visual rhythm, with many words chosen seemingly only for the sound they make in combination with other words. As a line from the “Choired” stanza of “Harmony” tells us: “To sing   water out loud   creature noise   a decampment.” These ideas all seem to have just the piercing tail of each other in connection—but, as flatly as they’re introduced, the real impact comes next: “to have a drunken brother somewhere also caught through the jaw.” Hall’s flashes of memory and personal moments are often brief like this, which is a shame, because they make up the book’s most powerful moments.

As I plodded through the soggy waves of language disassembled and reorganized (“plu / unplu / plu / unplu /   fast-fast   (to merit the slap out of / * / Or have no lip to give = savannahs,” from “Ingress”), I found myself hunting for bits of poetry that would settle in my heart. There were more than a few of them. In “Fletched,” Hall gives us a bitter memory from youth. “When I was five   asleep on a fold-out couch   my cousin Clint Gordon 16 sleeping there too / I woke up he was in me hurting me from behind I tried to get up he held me down if you tell   they’ll send you to the bad place.” Brief tragedies like these aren’t to be wished for simply because they’ll make a good poem—but it feels like the meandering scraps of syntax in the rest of the book dull a little in comparison to the very raw and real moments of confession like this one.

There’s still something to be said for the moments of pure lyricism and experimentation. “Fire Number 178” ends “my laboratory the moment / is accordion-shaped   cluttered   sopping // and not eternal.” It’s a combination of blurred grammar and piqued contemplation powerful enough in the question of its introspection to grab the reader by the ear and refuse to let them go. Other babblings are less motivating: in “Forfar,” “The night I shouted splurged poise three times and then enacted it” is a bit too nonsensical to come together into a complete picture, and this is a trend carried throughout the collection. Mostly, I kept thirsting for the moments when Hall shucked off the cage of his ambling language quirkiness and simply spoke, ending poems with lines like “I have missed the boat   fuck it.” While I have a personal proclivity for well-applied profanity in poetry (say that five times fast), here, the profane comes at the end of a long, sombre meditation, which proves that Hall knows just when to turn the torque to win his audience over. Why, then, after reading this collection, am I left with a feeling that there was a little more of spit and soul that could be on the page?

The Small Nouns Crying Faith… isn’t for the inexperienced reader

For those unfamiliar (or un-fond) of the avant-garde, linguiphile tendencies of Book Thug’s most prevalent titles, I’d recommend Hall’s earlier collection Killdeer as an introduction to his work, or to slightly more experimental poetics in general. The Small Nouns Crying Faith, while rewarding for someone as interested in the disgruntled gasp of language as I am, isn’t for the inexperienced reader, though the brief moments of honest lucidity might be enough to win over some converts from the camp of more typical poetry. At 112 pages, the book is lengthy enough that there’s sure to be at least one rewarding moment inside for any reader—it’s just a matter of how many of those moments it takes to determine whether Nouns is an eccentric curiosity, or an experiment wrapping around a gem of human experience.