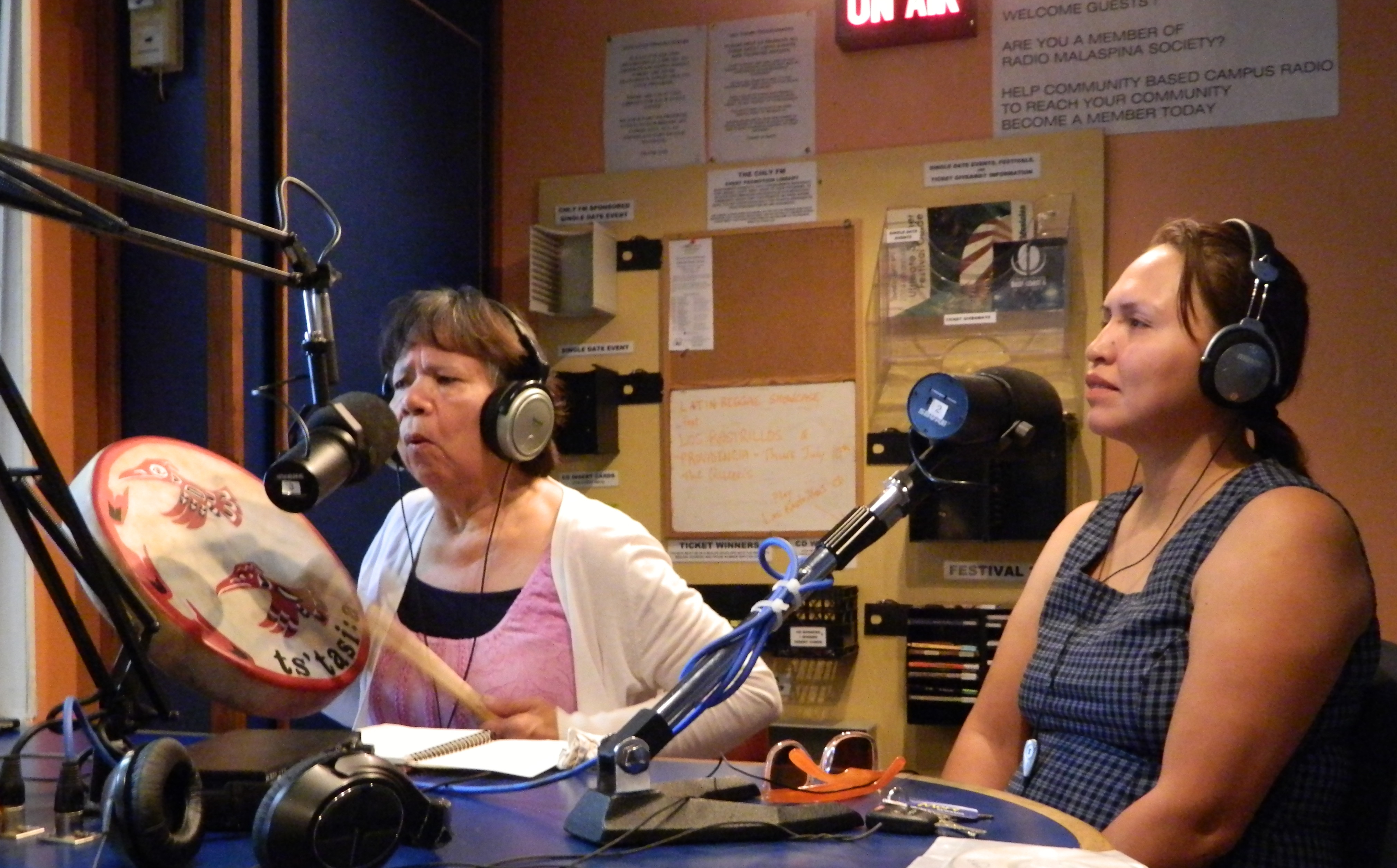 Geraldine Manson and Natasha Bob in the Studio. Photo courtesy of Kenny Brault

Brault is already a familiar voice on the CHLY airwaves, having previously hosted an eclectic celtic show. Brault felt it was important to honour the country’s celtic roots because he feels that “Canadians typically identify with American music and culture.” As he became more familiar with CHLY, he learned of the station’s commitment to broadcast seven hours a week of First Nations focused radio and the difficulty in fulfilling this requirement. He felt inspired to continue his mission to present Canadian perspectives on the airwaves by co-hosting a show that would feature local First Nations music.

“I wanted to follow protocol and ask for permission from the Snuneymuxw First Nation to broadcast in their traditional lands,” Brault said, at which point he realized the CHLY airwaves broadcast over Stz’uminus (Ladysmith) and Snaw-Naw-as (Nanoose) lands as well, reaching as far north as Campbell River and the traditional lands of Tla’amin near Powell River. While making the appropriate requests with these three communities, he sought out people who might be interested in hosting the show with him.

In the course of connecting with community leaders, the show began to evolve into something beyond featuring First Nations musicians. The communities all expressed their desire for the show to have an emphasis on cultural education, language, and, of course, music.

Getting the show off the ground involved more than following protocol and finding contributors. Over a course of two years, proposals were sent back and forth between Brault and CHLY’s previous management. This spring, the show received the green light to begin broadcasting. Brault couldn’t be happier with the timing, as it came about when his co-hosts were ready to commit.

When the hosts got together to name the show, the right was passed on to Manson—an elder in VIU’s Human Services as well as the Bridging Pathways programs—of Snuneymuxw to choose a title. Manson thought of her traditional teachings and asked David, as the eldest, to name the show instead. Brault recalls that David immediately started thinking in terms of the Hul’q’umin’um’ language.

“Language is so important and sacred,” Brault went on, explaining that the title David chose highlights the show being shared amongst different communities as well as the cultural emphasis on showing respect to fellow community members.

During the early planning stages of the show, Bob, a VIU graduate of the Criminology program, began to take an interest in the platform of radio, adding that at the time “a lot of First Nations topics were starting to arise” in the media. She felt it was important to be a part of a positive framework for cultural education.

Bob hopes that more First Nations, Inuit, and Métis VIU students will be inspired to do the same. “I really want to encourage students to use their voice,” she says, adding that she was shy in the beginning but overcame it as she felt the pride in her work. One of the original goals of the program was to include more students.

“There are a lot of First Nations students from all over the place,” Bob said, “and I think there are a lot of stories and it’s a great opportunity to showcase the diversity in First Nations culture.” Manson would like to see more student participation as well. She invites students to share their family’s stories and songs. Brault said they can be flexible in finding a way to help students hear their contributions on the radio. “They don’t have to come in live. We are open to everything. There are no limits, as long as there is a First Nations perspective to what they share.”

As an elder for the university, Manson wants to foster a student-driven radio show. “Traditionally, elders take the lead. But we want to take a step back when young people feel comfortable to step forward. We want to give them their roots.”

Reflecting back on the early planning stages, Manson said, “In the beginning it was about songs—songs people never heard before, songs that come from creation stories, stories from their elders and grandparents.” Now she feels that the “Si’ em’ nu Ts ‘lhhwulmuhw” radio show can be part of a healing process from colonial history. “Even today there is a lot of misinformation about First Nations culture.” The radio show is an opportunity for First Nations students to find their voice as well as for non-First Nations students to better understand the culture of the traditional lands they live within.

VIU student Celise Squire has a desire to grasp the First Nations culture. “[I want] to better understand the traditional stories of the land I am standing on right now while I am on campus. I don’t want to know a textbook version of an entire culture; I want to know the real stories. I’m proud to live here; I’m grateful to live here. I hope to do my part in showing the respect this land deserves. I think it’s great that I can tune in and hear songs and stories.”

With a smile etching across her face, Manson explained the importance of VIU, CHLY, and the Snuneymuxw, Stz’uminus, and Snaw-Naw-as First Nations working collaboratively. “By using VIU’s radio, working with Ken and all the other communities, we are pulling out wisdoms from everywhere.”

“Si’ em’ nu Ts ‘lhhwulmuhw” airs on CHLY every Monday, Wednesday, and Friday from 10 am until 11 am.