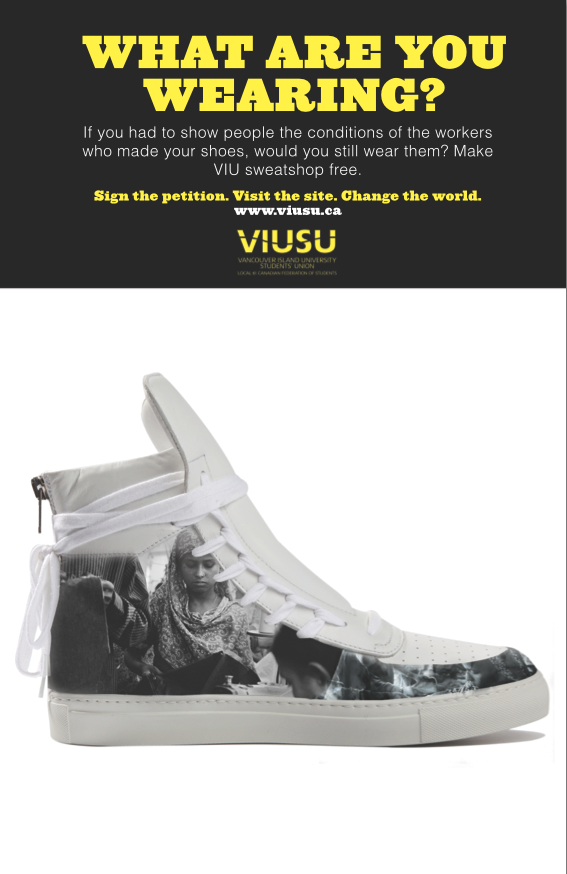 Raveena, 17, wakes early in a small room surrounded by her parents, grandmother, and three brothers sleeping on thin mats. The family stirs around her as she moves to the kitchen before it gets too crowded, splashes her face with water from a bowl, and grabs a slice of leftover naan bread. She takes a few hasty bites before leaving for work. Parting the curtain that hangs in the entryway, the sun takes on an otherworldly haze through the dust that’s kicked up from the road. The door covering offers the illusion of privacy but does nothing to shield their home from the surrounding dust swirls and the smells of her neighbours’ morning activities. She finishes her breakfast on the 30 minute walk to the garment factory. Her feet are caked in dust when she arrives.

Sweatshop labourers like Raveena frequently work 12 hour days, with only one break at lunch, for a total of 60-80 hours per week. Under pressure to fill an order from a large purchaser, the factory doors may be locked and a day’s work can stretch to 25 hours. She may receive only one or two dollars a day for her efforts—not enough to keep food on the family’s table. Often, her working conditions are unsafe—the factories are rat-infested and structurally unsound—and she is subjected to harassment and intimidation from her supervisors. She may be forced to work overtime and handle toxic chemicals like paints, solvents, and glues without protection.

Raveena is a composite of what one young woman’s experience as a sweatshop labourer in India may look like. She could also live in Central or South America, Asia, or certain regions of Europe—these are places with some of the lowest wages and human rights protections in the world—but the conditions will look similar.

The word “sweatshop” reaches back to the end of the industrial revolution and refers, literally, to the sweat of the workers who produced the goods. According to dosomething, a sweatshop “is any workplace in which workers are subject to extreme exploitation. This includes not providing workers with benefits, acceptable working conditions, or a living wage. A living wage differs from minimum wage by enabling workers to cover the cost of basic needs, such as food, shelter, and health care; minimum wages usually do not cover these costs.”

Until recently, major garment manufacturers sought the cheapest possible labour for production of their goods. Consumers were demanding low prices, and the industry was delivering while still keeping profits high. Every time a business imports sweatshop-manufactured goods for sale to Canadian consumers, the international garment manufacturing industry receives tacit approval for their substandard treatment of workers. It sends the message that it’s acceptable to keep costs low at the expense of human workers. Free Trade Agreements have created the conditions that make sweatshop manufacturing lucrative and attractive for corporations. According to dosomething.org, Nike, Disney, Wal-Mart, Reebok, the Gap, Liz Claiborne, and Ralph Lauren are just some of the companies that have set up international corporations to circumvent US labour laws. This is just a sample of the apparel manufacturers who have been implicated in supporting sweatshops. Realizing that the money they pay for their clothes remains in the coffers of corporations while only the tiniest trickle finds its way back to workers like Raveena, consumers are beginning to demand change. Some large manufacturers and retailers are pledging to become sweatshop free, but the weight and enforceability of these pledges remains to be seen.

The Vancouver Island University Student’s Union (VIUSU) brought the issue of ethically sourced goods to campus this year with a sweatshop free FROSH Week. “It’s been received very positively. I would say we’ve had an almost universally positive response,” says Patrick Barbosa, VIUSU Organizer-Advocacy representative. “We have found a positive response with mixed levels of awareness. One of the goals of the campaign is to provide awareness, and we’re achieving that goal.”

Posters for the campaign challenge students to visualize the working conditions behind the garments on their backs and feet. For an even more vivid picture, students are invited to simulate the experience of a sweatshop worker’s life. Sim Sweatshop is a game on the VIUSU website set in a shoe factory that presents a variety of tasks and variables that a worker may encounter in a day.

“VIU has a long history of listening to concerns of the campus community.”

Sherry McCarthy, VIUSU Chairperson, says, “Students recognize the importance of supporting companies that implement safe and ethical employment standards.” They are collecting signatures on a petition to urge the campus to adopt a purchasing policy that excludes goods produced in sweatshops. They hope to document support from at least 25 percent of students to present to campus administration by the end of the semester. Barbosa is optimistic that the campaign will be well received. “VIU has a long history of listening to concerns of the campus community,” he says.

Janina Stajic, Manager, Communications and Public Engagement for VIU says, “At this point, VIU is in active discussion with VIUSU on how we can support this initiative. It’s too soon to comment on what that will look like, but we hope to have something to share in the coming months.”

This is a student-led initiative, and students have made it clear that they would like to explore more ethically produced options. There’s a lot of conflicting information around the sources of goods and truth in labelling. “The reality is that there is no guarantee that an item is sweatshop free, but that doesn’t mean that we get a free pass. We need to continue to work to ensure that people aren’t suffering so that we can get affordable clothes,” Barbosa says.

The fear of more expensive clothing is another concern for students. “For the Students’ Union, we have seen no net increase in the cost of materials,” Barbosa says. He anticipates a similar situation for the university’s costs.

The issue transcends economics though; it has become one of life and death. Recent tragedies at sweatshop factories demonstrate that the working conditions can surpass unsafe and become deadly. Catastrophes like the April 2013 factory collapse in Bangladesh that killed at least 1100 people and injured more than 3000 bring the story home with vivid images of deadly destruction. Putting a human face on the sweatshop industry, with accompanying human suffering, has propelled consumers into action. They’re telling the retailers and manufacturers of their favourite brands that they won’t tolerate having blood on their hands in the name of cheap clothing any longer.

The same message has reached campus communities. “Using the bulk purchasing consortium of the Canadian Federation of Students, we have been able to put our money where our mouth is,” says Alec Patterson, VIUSU Director of External Relations. “Students want a formalized commitment to high ethical standards through a comprehensive purchasing policy that supports safe working conditions and fair treatment of employees throughout the supply chain.”

they won’t tolerate having blood on their hands in the name of cheap clothing any longer.

The Nanaimo campus bookstore also takes the issue seriously. “The bookstore has a process to help ensure the majority of what we source is produced in an ethical way,” says Mike Thibodeau, Retail Operations Manager. “We work with Campus Stores Canada, an organization which partners with vendors who are members of either the Fair Labour Association (FLA) and/or the Fair Trade Association (FTA).”

VIU’s campus/community radio station, CHLY, has also made a commitment to source its merchandise ethically and chose to run their current batch of t-shirts with ethically sourced material. “Our shirts tend to be American Apparel at the moment, which from my understanding is sweatshop free and made in the USA,” says Radio Malaspina Society board member Jesse Woodward. He has experience sourcing promotional merchandise. “I used to work as a screen printer, and some of the garments out there are indeed made with shady labour,” he says. “There is a Canadian company out of Montreal that uses labour from Haiti and Ecuador that was the cheapest shirt you could get.” Woodward noted that sweatshop free options were available from Canadian companies, but that they didn’t offer as wide a variety of colours and styles. They were also outside of the society’s budget.

Sweatshops aren’t limited to the garment industry; they also produce source materials, like cotton or silk, or the rubber and plastic used for shoe treads and branded water bottles. Trying to shop sweatshop free can be overwhelming, especially with inconsistency in labelling, but a focus on ethically sourced clothing and footwear can be a good place to start. “By working together, students have created an alternative to sweatshop materials on campus,” McCarthy says.

One day, Raveena will wake up in her own home with a family of her own, running water, tiled floor swept clean, and separate bedrooms for her children, who will go to school. Raveena may still sew for a living, but she will make a living wage.