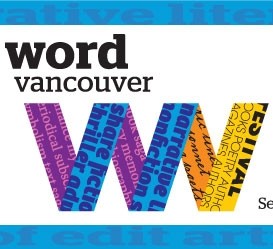 My friend, Antony Stevens (The Navigator’s web content editor), and I just paid the cab driver who dropped us off, the first face in our long day’s journey through Word Vancouver, Western Canada’s largest celebration of literacy and reading. As we made our way into the ferry terminal, Antony, who was still fighting off a combination of cold and flu, muffled a cough into his sleeve.

“Yeah, I’m fine, but the cab driver thought I was on drugs.”

“Yeah. When he picked me up I started coughing, and he said, ‘Just getting off the rock?’ I guess that’s what he’s used to seeing.”

“Like it was the most normal thing in the world,” I said.

Word Vancouver is an event that takes place over a weekend (and a bit) in Vancouver, inside and outside the library and library square, featuring small presses, author readings, and literary-themed events. Rather than try to paint an encompassing picture of the event, I thought I’d give the world of Word as seen through a singular viewpoint.

Antony and I hit the festival just after 11 am. The street and whole of the library square were lined with tents, a precaution against the day’s predicted rain that never came. We avoided the info tent and a table giving away free translations of the Koran to make our way to VIU’s own Portal booth and say hi to our classmates. One of the primary problems with Word, or with any festival of its kind, is that there’s no way to do everything that interests you. By the time Antony and I had made our first round of the festival and gotten our bearings, we’d already missed a Q&A presented by the Canadian Authors Association about pitching manuscripts to publishers, as well as a reading by authors Connor Doyle and Juliane Bitek, under the wing of Vancouver local literary magazine subTerrain. Of course, the most important thing to do was buy books. Making the choice between the swaths of tables decked out in all manner of literature, from non-fiction to young adult poetry, was almost impossible, so the volumes that survived the “flip test” were the ones that jumped out the most—let this be a lesson to future authors and publishers alike: sometimes, the cover is all you have time to judge a book by. Either that, or the first few sentences of a page pulled at random from the middle of a chapter; make your words count. Over the day, Antony and I found it impossible not to bankrupt ourselves on the selection of titles available. Highlights included a book of poems based on Facebook status updates, a brown paper “mystery book” pack from Prism magazine, and a photography/writing project based around a copy of Charles Darwin’s On the Origin of Species left to decompose in the Canadian wilderness for a full year.

sometimes, the cover is all you have time to judge a book by

There was too much at Word—too much, ironically, to put into words. Antony and I quibbled over even the concept of words themselves as we perused the festival. “It says ‘lots more inside,’” I said early in the day, pointing to a sign at the front of the library. “What exactly do you think they mean by ‘lots?’” A quick round of the library’s main floor only yielded a few uninteresting tables. “That didn’t seem like lots,” I said on the other side. “I guess that depends on exactly what you call ‘lots.’” “As opposed to ‘many,’ I guess. Or ‘a few,’” I said. Then, “Wait, are we really going to get into a discussion about the countable quality of ‘lots?’” Antony just laughed.

Have you dropped by our table at @WORD_Vancouver yet? We’ve got great deals on subscriptions & back issues! pic.twitter.com/W45LTMAOEl — Room Magazine (@RoomMagazine) September 28, 2014

There were talks. Charmingly Australian-accented author Eve Lazarus gave a talk about Sensational Vancouver, her collection of historical stories published by Anvil Press. She talked about the life of detective Joe Ricci, an early 20th century Vancouver police officer whose professional life circled the seediest drains of the city: gambling dens, opium joints, and brothels aplenty. She showed off a touring map of Vancouver with the site of every historical brothel labelled, including a large concentration suspiciously surrounding the Vancouver police station. Despite the abundance of ill-repute, Lazarus was quick to stress her book was about “more than just the seedy parts of Vancouver.”

Even for the not-particularly-bookish types, Word was bursting at the seams with culture and captivating performances. Bands took the main stage throughout the day, from country folk and story-telling, to swinging ukuleles and mandolins. Poets, novelists, and all sorts of assorted authors read in front of seated audiences, on the street and in the “poetry bus” pulled up alongside the library square. Antony sat with me and sang along to a cover of “Will the Circle Be Unbroken” by the aforementioned ukulele group.

Towards the end of the day, the main stage exploded with language, power, and politics as Sebastien Wen and the other members of Vancouver’s Youth Poetry Slam Team took over with a performance rife with personal struggles and societal calls to action. “When will violence be a dead language?” Wen asked in his performance of his poem “Dear Cruelty.” “After enough eyes have shied away from the dirt? After enough lives have been blanketed over the lives of the destroyed?” Wen is fresh from his victory as the 2014 Individual Youth Slam Champion, and it shows—his performance was nothing short of jaw-dropping.

even for the not-particularly-bookish types, Word was bursting at the seams with culture

To cap off the long day, Antony and I managed to squeeze our way into a panel featuring editors from some of Canada’s most notable literary magazines, such as Room, Prism, and Event. We were told over and over again, “Don’t get into [creative writing or publishing] for money”—a sentiment that begs the question of the state of the arts in Canada, or the world in general, as well as serving as a word of warning for fellow creative writing and art majors at VIU.

It wasn’t until the bus ride back from the festival, both of our bags loaded with books, magazines, pamphlets, and poetry, that I tried to think of a way to sum up the entirety of Vancouver’s most literary weekend of the year.

“I don’t just want to give a description of the whole event, you know?” I told Antony, the windows of our bus rolling past the rapidly greying sky and low-hanging trees of the route to the ferry.

“What if I make it about the minutia of the day? Like, if instead of talking about the books or events or anything, I talk about the conversations people had around them. Like that guy who couldn’t decide which chapbook he wanted to buy. Like, ‘Hmm, I don’t know. Which one is the most popular?’ ‘This one has been selling pretty well, but I think that’s just because it has the most well-known name.’ ‘Oh.’ You know, that kind of thing?”

There were a hundred conversations like that in a day, a hundred faces of people at the festival whose eyes were tired from scanning covers and first pages, a hundred stories surrounding the idea of the story—people who had converged for one second in time to explode into literature, and then disappear, taking only their books with them. Something, we must be told again, that was hard to put into words.

“I’m not sure that would be right for The Nav,” Antony said.

And so, here we are.