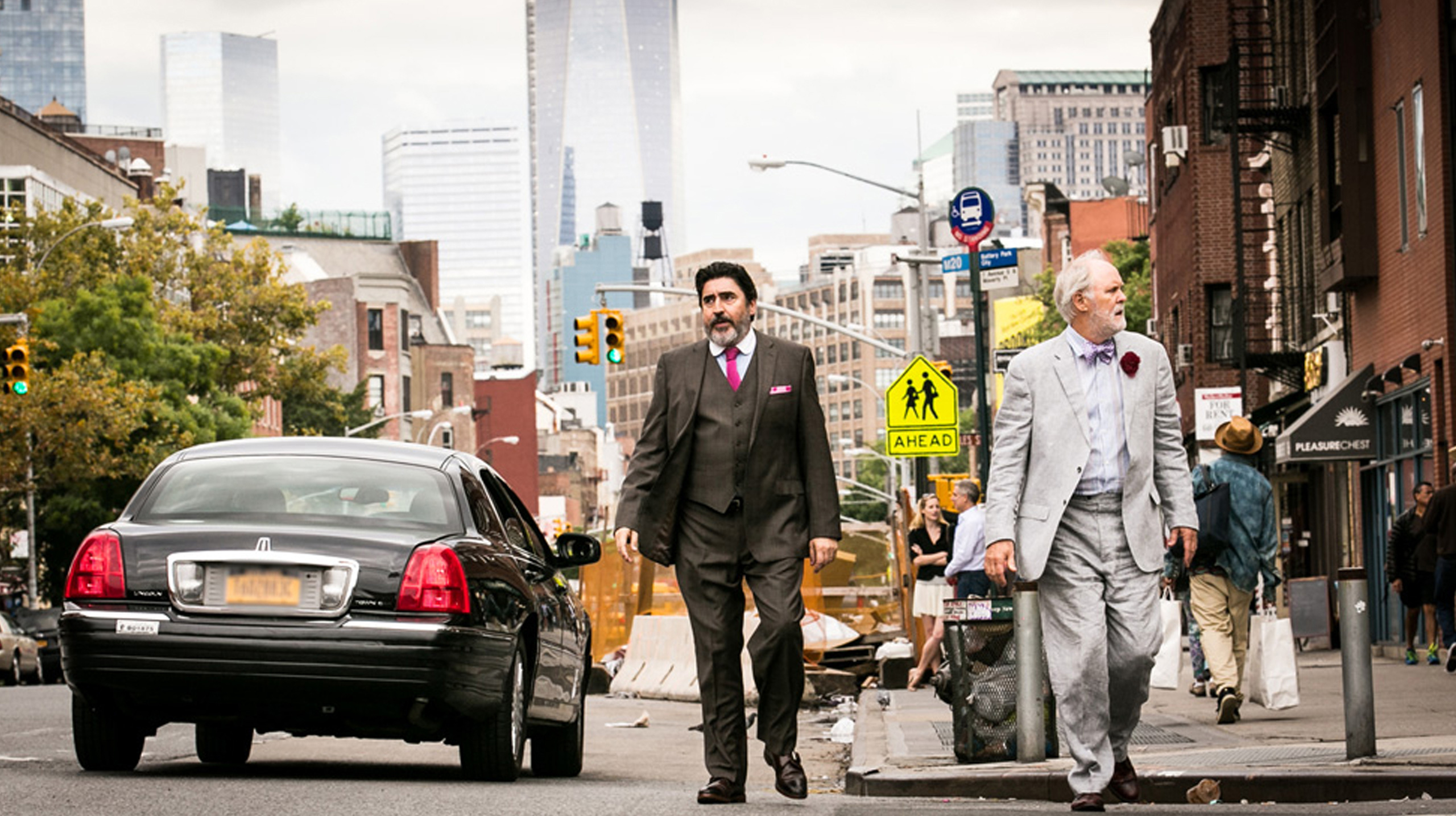 This is another one of those films—the kind where they take two well-known, straight actors and put them in a same-sex relationship with each other. On the surface, you’d think a marriage between Alfred Molina and John Lithgow would make for a wonderful romantic story. Molina and Lithgow are close friends off-screen and demonstrate wonderful on-screen chemistry, but the film falls flat and shadows what few good qualities it has.

Ben (Lithgow) and George (Molina) have been in a relationship for 39 years and are finally getting married. We open to a picturesque, sunny morning in New York City as Ben and George wake up next to each other. The morning quickly turns into quiet chaos as they  weave around each other and prepare for the ceremony: giving orders to the maids for cleaning and dinner, finding Ben’s glasses, and assuring outfits look sharp. It’s a morning that appears routine as George mutters “Not today, please God not today” over finding Ben’s glasses while arranging everything else. After some trouble finding a taxi, they are wed at a small ceremony surrounded by family and friends. Afterwards, a party is held at Ben and George’s apartment,  where they serenade everyone with “You’ve Got What It Takes.” They are then treated to a charming toast from Kate (Marisa Tomei), the wife of Ben’s nephew Elliot (Daren E. Burrows), who talks of the couple’s welcoming and loving nature, as well as what a delight they are to be around. It’s a wonderful opening scene that establishes the intimacy of the couple in a condensed period, while allowing the audience to think the characters are prepared for what will come next in their lives.

After their honeymoon, George returns to his job as a music teacher at a Catholic school. The school has been aware of Ben and George’s relationship for years and has had no problem with it, but they decide to let George go when a bishop hears of the marriage. With Ben being a painter that never got notably recognized, the couple are left with Ben’s social security cheques and George’s private piano lessons for income, and they have to sell their apartment. In order for them both to remain in the city, they have to stay in separate friend’s and family’s homes until they can find somewhere for themselves. Both homes prove to be a struggle to live in. As Ben puts it, “When you live with other people, you know them better than you care to.”

Ben ends up living with his nephew’s family. During his stay, he inhabits the bottom bunk of a bunk bed shared with Elliot’s son, Joey (Charlie Tahan). Early on in Ben’s stay, you can see Kate rethinking the nice things she said to Ben at his wedding. Kate is a writer and often works from home, and she is used to having a quiet space for most of the day. Ben is oblivious and continually interrupts Kate with conversation, then states that he can’t work because he has trouble painting if someone else is around. This drives Ben to paint on  the roof, which soon gets in the way of Joey’s school priorities because his homework partner, Vlad, chooses to pose for Ben. The incompatibility is then driven in further when everyone finishes their meals far ahead of Ben on multiple occasions, leaving Ben feeling guilty. It’s understandable that he is slower, since he’s 75, but the family becomes unwelcoming so quickly that it feels like they’re deliberately acting crass.

George’s living quarters are no better. He ends up on the couch of Ben and George’s gay cop neighbours, Ted (Cheyenne Jackson) and Roberto (Manny Perez). Ted and Roberto win the award for most frustratingly insensitive hosts as they continuously throw raucous parties and play late-night sessions of Dungeons and Dragons. George often stays up late waiting for the living room to clear so he can sleep, which begins to take a toll on him.

During this time, Molina and Lithgow maintain a tender connection, which is punctuated with the time they spend together. The film mostly keeps them apart, which builds up some great moments when they finally get to see each other, but the audience wants to see them together more because they’re the only good characters in the film. Everyone else in the film acts like a cardboard cut-out, with most of the attention being put on Molina and Lithgow. This wouldn’t be so bad if it wasn’t for how horrible the acting and dialogue delivery of the other characters was. It feels so unnatural that it’ll leave knots in your stomach.

everyone else in the film acts like a cardboard cut-out

What’s strange is how director Ira Sachs has made a habit of doing this in his other films, especially in his last film, Keep the Lights On (2012). Sachs is incapable of writing compelling dialogue (partially due to co-writer Mauricio Zacharias) and coaxing good performances out of his supporting cast,  which mixes badly when he creates a main character-focused film that doesn’t focus enough on the main characters. His films are poorly edited too, with moments playing out faster than they should (a kettle in Love Is Strange comes to a boil in what seems to be two seconds) or parts of the film that are meant to be elliptical, but are executed so inelegantly that you are left feeling confused.

It’s a shame, because Sachs does create many brilliant moments in Love Is Strange. There are always subtle details to look for, such as Kate reading The Woman Upstairs by Claire Messud in bed during a scene in which she suspects Elliot is cheating on her. Sachs also plays with the audience’s expectations on how certain relationships will play out, due to the mindset of the film. One of the most striking background details in the film is its quiet piano score. Piano ballads play between scenes, but one of the scenes transitions to a little girl playing one of the songs at a lesson that George is giving. It makes every piece of piano music in the film feel like it’s part of the world; like it’s either being played or occurring in either Ben or George’s head. Although it already seems that Ben and George’s lives are enveloped by art, it helps create a sense that music is a perpetual occurrence in their lives.

There’s a scene where Ben comes home from seeing a restoration of a film at a movie theatre and comments that it didn’t feel like the same movie and how seeing it on the big screen has changed his perspective. While I do think that seeing a film on the big screen is the definitive way to experience it, the main problem is that flaws stick out like warts. Love Is Strange could be a beautiful film with Molina and Lithgow’s performances and Sach’s subtle details, but it’s held back by bad acting, poor editing choices, and a flat script.