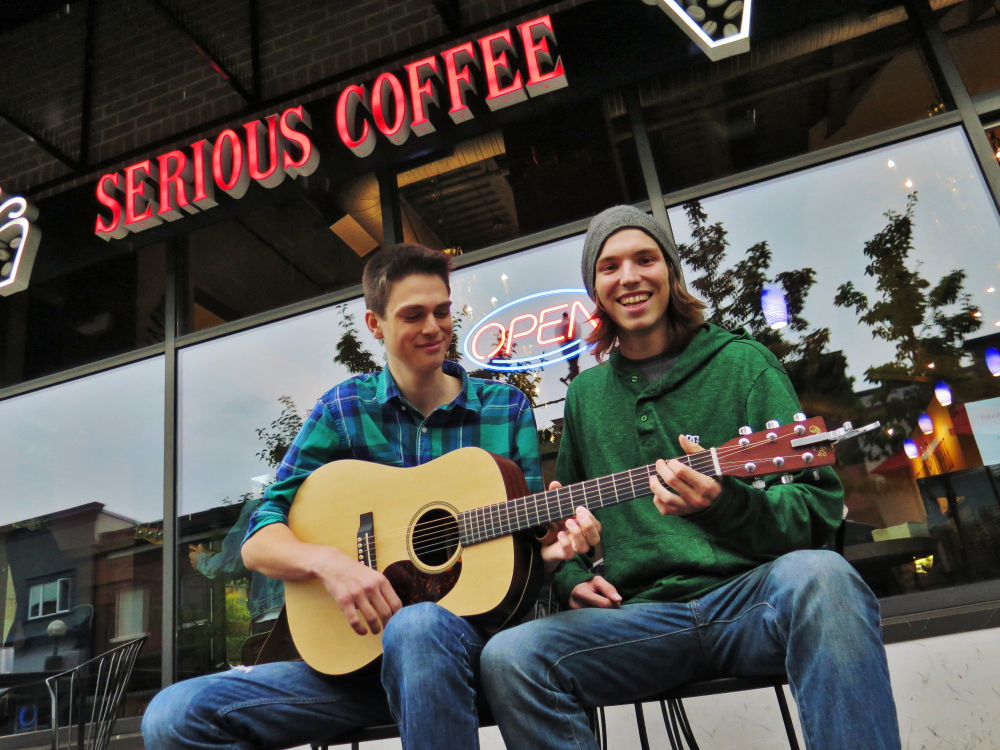 Mike Miller (right) started going to open mics a year ago to get practice and, as he says, to put his name out there. “First time I ever played I was so nervous I could barely hold the frets on my guitar.”

Open Mic is the reason for a student pub to stay open their only late night of the week, and fuels a Sunday afternoon of pure blues jamming at an established downtown club. Whether you are drawn to the charming shabbiness of a cast-away bar or prefer the youthful vibe of a hip café, the tradition of sharing live music brings musicians and fans to venues of every kind. You can listen to the line-up of other artists all night while waiting for your turn, or practice and gain your courage for as long as you want in front of a crowd of three. Whatever the drive is for musicians to gather and play free for one another, the sign-up sheets never have a blank spot.

VIU’s Student Pub provides a chill atmosphere and safe place for patrons who want to avoid downtown rowdiness. Open until 12 am on Thursdays, it is the only place on campus to meet late at night. Although there are mostly students in the line-up, everyone is welcome to play. The main difference from other venues is that the pub draws a very young crowd.

The pub is usually full by 8:30 pm, and although there are a few outsiders among the artists and patrons, students make the majority of the crowd.  The stage opens at 9 pm to music as well as comedy skits “as long as they’re tasteful,”  Pub Manager Andrew Dalton says.

He explains that the VIU Pub takes pride in providing a friendly and safe atmosphere. “We’ve never had issues with violence or spiked drinks in the five years I’ve worked here,” he says.

But the biggest draw seems to be the opportunity for patrons to get on stage and perform.  “It’s the only place on campus that does anything at night. This is the one night of the week that we stay open late and put on a big show, so people can get out and do something together. We’ve tried different nights and different events in the past, but Open Mic seems to be the only event that really sticks,” Dalton explains.

It’s a good thing for the students, especially those living in residence. However, this year, the majority of residents are under age.

Blues Jam at The Queens features a different guest band every week to open the afternoon. After the main gig, all musicians are invited to join the jam, and patrons to fill the dance floor. Organized by the Nanaimo Blues Society, the Jam offers both young and seasoned musicians the opportunity to play with high calibre bands from as far as Toronto, San Francisco, and The Pas (Manitoba).

“But we have some of the best musicians in BC right here on the island,” Haukenfrers adds, noting that the Society has been nicknamed “the Memphis of the North.”

Blues Jam runs on Sundays from 4-8 pm. Admission for non-musicians is $5.

Every Tuesday from 6:30 to 9 pm, Serious Coffee on Commercial St. changes into an informal and minor-friendly venue. Gui Beaudoin has hosted the Open Mic Night there since March 2011. He also provides the equipment and assists beginning artists with set up. Beaudoin operates almost entirely as a volunteer, although he accepts donations and receives a small weekly contribution from the coffee shop management. He says the event is his way to give back to the community.

“Open mics are where I learned to play music and perform,” he says. “I want to give young songwriters not only the opportunity to try their songs live, but a chance to win studio time where they get to experience recording professionally.”

The Vault, on the corner of Wallace St. and Albert St., is packed every Wednesday night. The sign-up usually counts over 20 names, and the crowd outside buzzes with musicians practicing their acts, smokers taking advantage of cozy armchairs, and other patrons savouring a moment to talk to one another in a more quiet ambiance.

A sense of nostalgia veils the Sunday Jam afternoons at The Patricia Pub, a traditional biker bar on the outskirts of downtown Nanaimo. Sunday Jam runs from 3:30 to 7:30 pm and allows musicians to play up to five songs.

“The culture of open mics is slowing and dying,” says Susan LeForge, a volunteer in charge of the sign-up sheet. “We need more support for live music instead of having DJs. It’s different from a concert. When you see a musician play at an open mic, you get this feeling of participation among all of us,” she says as she watches her boyfriend’s band play the first song of their rock‘n’roll playlist.

A random visitor might get the same feeling when walking into The Cambie on a Wednesday night. While other events at this staple of Nanaimo’s music scene are often close to being sold out, the free Open Mic, running from 9 pm to 1 am, offers a quiet audience and room to experiment and practice.

“It’s just a different kind of crowd there,” suggests Jesse Kennedy, a singer and guitarist who threw a quick impromptu drum gig with a friend before moving across Albert St. to the other, busier venue that hosts an open mic that night.