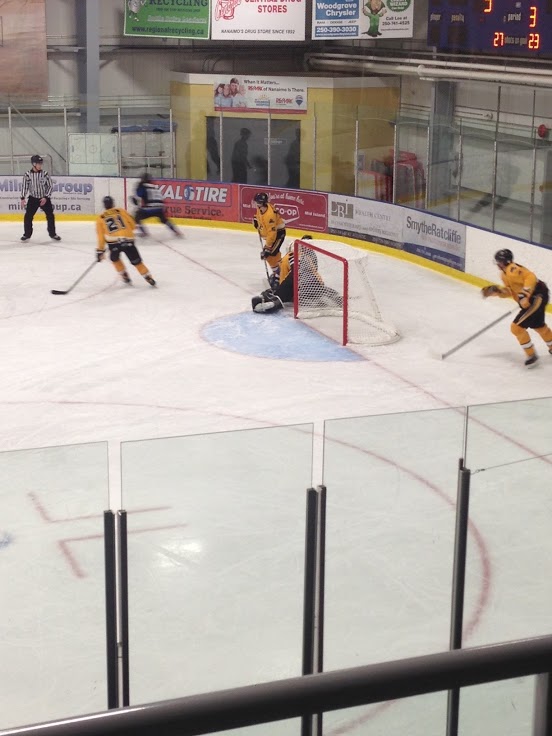 The Storm opened the scoring in the game on a goal at 5:31 by Dane Feeney. The Buccaneers tied the game on a goal by Trent Bell five minutes later. A power play goal by Gavin Rauser gave the Storm the lead. The score stayed 2-1 until midway through the second period, when James Severs converted on another Campbell River power play to put the Storm up 3-1. Hobin Zinck did score for the Buccaneers late in the second period to cut the lead to 3-2. But a goal by Tyler Welsh 15 seconds later put the Storm back up by two heading into the second intermission. A goal by Michael Olsen just 2:14 into the third period gave the Storm a 5-2 and erased any hope of a Buccaneer comeback. The Storm picked up the victory by a final score of 6-2. Final shots in the game favoured Campbell River 47-43. Campbell River is still undefeated in the season, improving their record to a perfect 9-0-0-0. The loss snapped a five- game winning streak for Nanaimo.

On Thursday, October 2, the Buccaneers played a home game against the South Division leading Westshore Wolves. Nanaimo opened the scoring at 2:40 of the first period on a goal by Will McNamara. Westshore tied the game on a power play goal by Connor Krupa at 5:46. But Trent Bell gave the Bucs the lead back before the midway point of the first period. The score stayed 2-1 until early in the third period. McNamara blew a slapshot past Wolves goalie Riley Welyk  and gave Nanaimo a 3-1 lead. Brett Lervold scored for the Wolves at 17:20 and cut the Bucs’ lead to 3-2. But Nanaimo added an empty netter and picked up the victory by a score of 4-2.

The Buccaneers currently sit in second place in the VIJHL’s North Division, one point back of Campbell River, but Nanaimo has played two more games. The Bucs’ leading scorer is Will McNamara, whose 11 goals in 11 games ties him for league lead.