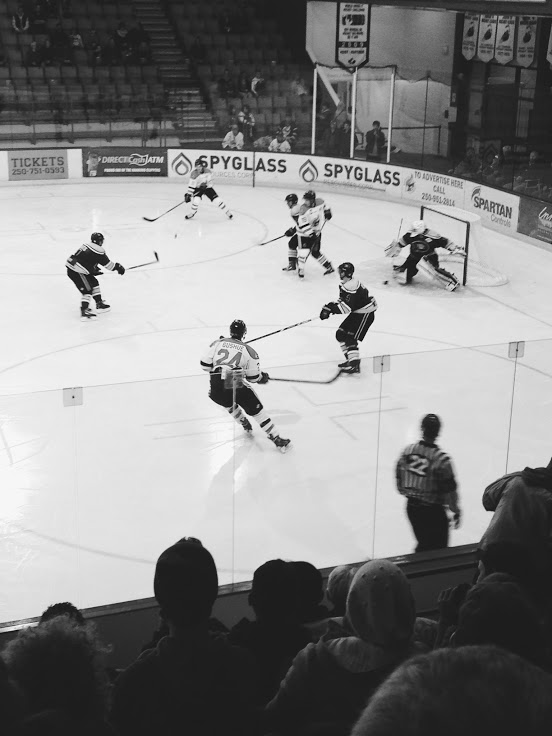 Nanaimo Clippers forward Sheldon Rhemple attempts to control a pass on a first period power play against Powell River. Rhemple had three goals in Nanaimo’s 8-4 over the Kings

The Nanaimo Clippers got off to a rough start this season. The team lost both games they played at the BCHL Showcase on September 20 and 21. The Clippers fell 6-4 to the Prince George Spruce Kings on Saturday before dropping a 7-6 decision against the West Kelowna Warriors on Sunday afternoon.

But since the opening weekend hiccup, the Clippers have been on a roll. Nanaimo picked up a dramatic double overtime victory on Saturday, October 10, on the road against the Langley Rivermen. It looked like the game was going to end in a tie, but with 20 seconds left, Sheldon Rhemple shoveled a puck to the net which bounced off a Langley defender and into the net, and gave the Clippers a 3-2 victory.

Langley opened the scoring in the game just 24 seconds into the game as Will Cook completed a beautiful passing play to put the Rivermen up 1-0. Clippers captain Brendan Taylor scored on a power play five minutes later and tied the game at 1-1. But before the midway mark of the second period, Brendan Gulka capitalized on a mistake by the Clippers’ power play and scored a shorthanded goal to give Langley back the lead. Early in the second period, Ryan Forbes scored his second of the season and tied the game at 2-2. The score remained that way until Rhemple’s winner.

A night earlier, the Clippers picked up a 3-1 victory over the winless Surrey Eagles. Rhemple scored the only goal of the first period and gave Nanaimo a 1-0 lead. Yanni Kaldis added a goal midway through the second period and extended Nanaimo’s lead to 2-0. Ben Vikich did get the Eagles on the board near the end of the second period, but that was as close as Surrey could get. San Jose Sharks’ draft pick Jake Jackson added a third period goal for the Clippers.

Nanaimo played their first two home games of the season on September 26 and 27 against Powell River and Victoria. On Friday, the Clippers played their home opener against the Powell River Kings. The Clippers opened the scoring just 4:10 into the game on a goal by Brendan Taylor. Nicolas Carrier  also scored for the Clippers in the first period. But the Kings got goals from Curtis McCarrack and Jerryd Leung. The score was tied 2-2 after the first period.

In the second, the Kings took their only lead of the game on a power play goal by Stephen Hiff at 2:06. Trailing 3-2 midway through the period, the Clippers took over. Sheldon Rhemple and Brett Roulston scored before the end of the second period to give Nanaimo a 4-3 lead after two. Then, early in the third period, Rhemple scored two more goals in 1:05 to complete the hat track and give Nanaimo a 6-2 lead. Both teams added a couple of goals late and the Clippers sent the crowd home happy with an 8-4 win.

Once again, the lead was short lived, as Jay Mackie tied the game for Victoria just 1:15 later. But before the second period ended, Rhemple scored  and gave Nanaimo a 3-2 lead after two periods. Dane Gibson scored for Victoria and tied the game 3-3 early in the third period. This time it was Nanaimo who replied quickly, as Cole Maier scored a power play goal at 9:49 and gave the Clippers a 4-3 lead. From there, the Clippers held on for the victory.

Nanaimo currently sits in first place in the BCHL’s Island Division. The Clippers have eight points on the season, one more than the second place Victoria Grizzlies.

The Clippers’ next home game is on Friday, October 10 against the visiting Cowichan Valley Capitals. Tickets are only $10 for VIU students and include a free beer.