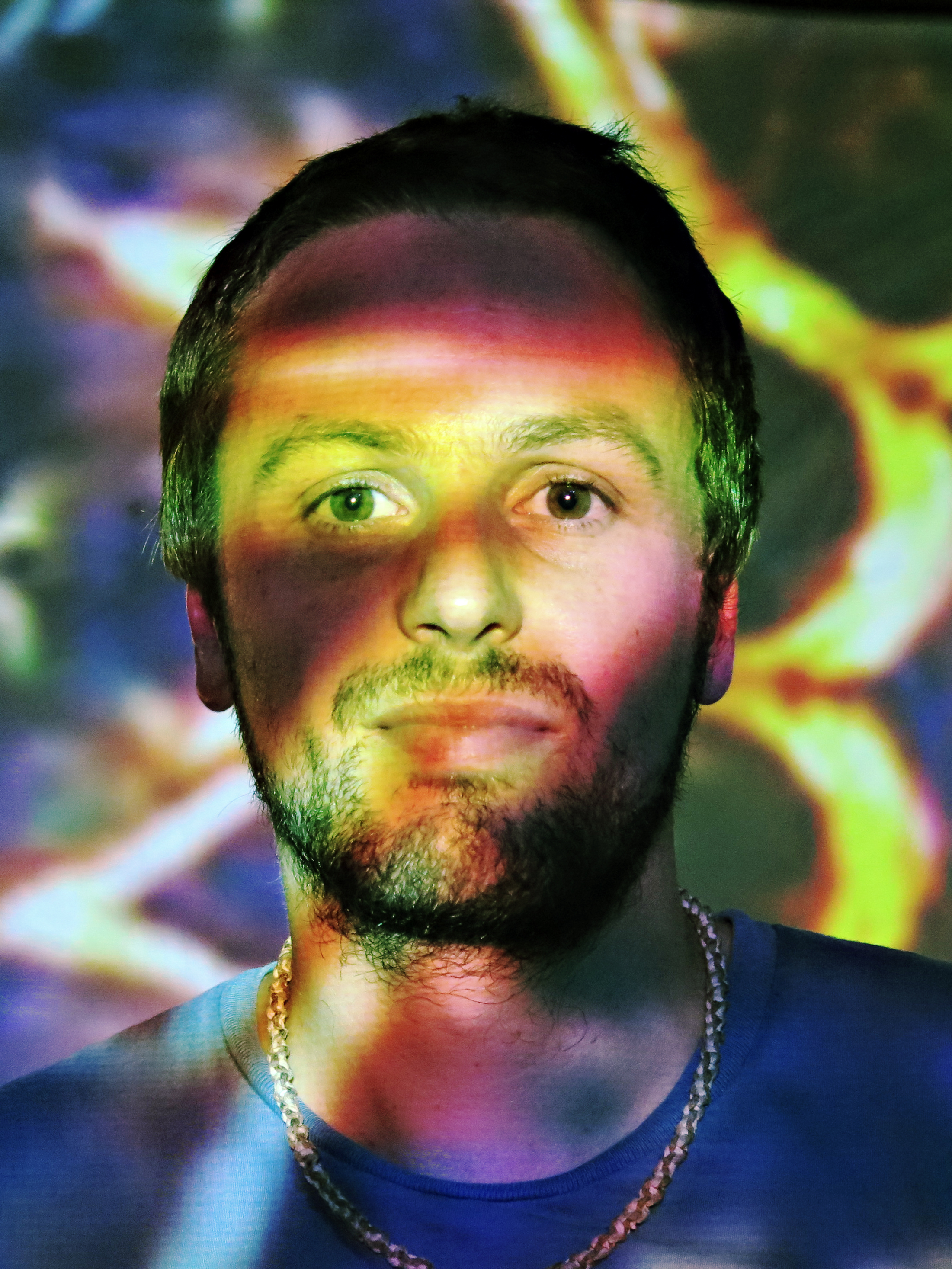 At first, he might seem like a man who’d rather let his art speak for him. But during our chat, projection artist and DJ Kris Vieaux was eager to discuss anything from hitchhiking to the quality of my hardwood floor. Although he studied anthropology and sociology at VIU for seven years, he chose to make a living with his hands. He will make you believe he has a soft French accent, even though he was born and raised in Nanaimo. He dresses in earth tones, but his art will blow you away with striking colours and psychedelic patterns. To Kris Vieaux, nothing is black and white.

NAVIGATOR: Judging by your accent and name, I thought you were French.

KRIS VIEAUX: I don’t have an accent. Maybe I sound like I have one because I’m shy and hold back. And it’s a fake French name. It was the last name of my great-grandmother’s boyfriend. It was Vieux, like “old” in French, but when he was blacklisted in the US during the Depression, he came to Canada and added the “a” so that he could find work.

What do you do for a living?

I am a jack-of-all trades. I’ve become a professional at restoration and building things.

How did you become a projection artist?

I’ve always been artistic and visual, and took tons of art classes in high school: painting, drawing, glass staining, and mural making. But after high school, I didn’t have any avenue to do visual stuff, and taking art at university was too much of a luxury. It didn’t even seem anybody else here was doing art.

So where did the push come from​?

I remember being 12 or 13 and watching U2’s Zoo TV footage with tons of TVs and multimedia on stage. Then I went to see their Pop Mart tour with the world’s biggest screen (they were just finishing their original efforts; I haven’t been into them since). But I liked the pop art stuff and the psychedelic feeling you can experience with mixed media; the graphics and the vibrancy of colours. Then I got into electronic music and raves. I went to Europe when I was 19. I hadn’t seen much projection art around here before going, but when I came back and went to live in Montreal, which is a big city for projection work, I was exposed to it a lot. But it wasn’t until 2008 that I started playing around with it more seriously. I had some knowledge of the software and knew what kind of style I wanted to do, so when projectors got a little cheaper, my girlfriend and I bought one. She can watch movies at home and I can use it out in the bush at parties.

Do you use any older types of projectors?

I’ve used old slide projectors from the late ‘50s. We went on a road trip around the US last summer and I bought a couple of them for $10 each. I used them at the Psych Fest last year.

It was interesting to see how the projection can reach the whole interior of the venue. How did you achieve that?

I projected onto a convex security mirror so it spread out more.

What is your current weapon of choice?

I’ve spent five years working with Modul8 (visual mapping software). I’d like to bring more organic influences into it. I’ve thought about filming or including some interactive media so that I could do it live on the spot. So I’ve been doing a lot of feedback video where you can point the camera at the source monitor and it creates a lot of crazy fractally colourful images.

How do you come up with something like that?

There are some local artists who specialize in feedback video, like the Trypton Media from Vancouver who did visuals for the Atmosphere and Diversity festivals. I go to see shows like that and then experiment. But even in high school, when we were doing projects with the camera from the library, I remember pointing it accidentally at the screen and it created some crazy loops and colour combinations. Now that’s done as digital manipulation.

[computers] can’t process the organic world, the little accidents in life and nature.

The vibrant colours and palette mixing are a hard thing to do with digital software. It can’t process the organic world, the little accidents in life and nature. Computers don’t know. They can only simulate it.

Do you think you could one day bypass the software and create something entirely organic?

Yes. There’s this guy in Germany who has a machine in which he puts…dishes. He doesn’t need to use his hand to mix anything, so his hand never comes into contact with the lens. He just mixes in the grids and things that push each other away. It’s totally organic.

There is a lot of abstraction, patterns, and psychedelia in your style. What draws you to that as opposed to, for example, something more figurative?

I enjoy abstract. But when people give me a theme, I’ll make it more direct and related. Like the Good vs. Evil party at Romper Room. I researched the theme and found some footage of different good and evil imagery and made a collage out of it. But that’s out of necessity. Or people ask me why I don’t do something more political, using news footage like U2 did. But I don’t enjoy making political things as much as watching it.

But you’d agree that even your abstract art has a message.

I guess. But it’s more of a feeling than a message.

What do you want people to feel?

Beauty, in some kind of way. And stimulation. It should be a background to what else is going on at the same moment. And once it’s gone you realize it was there.

It worked that way at the Damo Suzuki concert back in May, when you flooded the interior of St. Andrew’s United Church with colours and patterns. How would you describe the production of something like that?

I thought there was going to be some church representative and I wanted to make it beautiful. Not just for myself but also to show people that it doesn’t necessarily have to be some drug-influenced stuff. I was aiming for a stained glass effect.

Do you have any strong visual experiences that influenced your style?

Yes (pauses, then laughs). Not necessarily legal. Let’s just say I was at the Glastonbury festival in England and I really liked the paisley and kaleidoscopic imagery. I also like what I see when I rub my eyelids softly. Or when you’re driving and the street lights shine into your eyes and create psychedelic patterns. And dreams are a big experience, too.

I also like what I see when I rub my eyelids softly.

You have travelled a lot. You recently came back from another trip to Europe. How did that inspire you visually?

Architecture. I’ve always loved seeing amazingly built things. There’s so much effort intricacy going into it. When you do something by yourself—like putting down a floor or refinishing it—you see how much hard work it requires. And then you see how incredibly well those European buildings are built; it’s really humbling. At the same time, I felt conflicted looking at church architecture, knowing how much wealth went into that exuberant design. But even regular residential houses and their funkiness was inspiring. They’re not as generic as the homes here. The colour scheme, siding, they’re all different.

What do you think of the contemporary digital art scene?

I’m definitely not with my foot in the past and only wanting to do analog. I think the internet is incredible and makes art so competitive because everybody can do art and music now. But it can get a bit over saturated; too many new videos to watch, too much new music. It takes all the more to try and stand out or do something original.

Is there anyone outstanding you’d like to collaborate with?

I don’t idolize artists much. I get more influenced by people I meet. They can be doing small scale project and not grab much attention, but they’re doing something unique, something I have the same feeling about. But in my early 20s, when I was dreaming of becoming a music producer, I would have wanted to collaborate with the producer of Radiohead and Beck, Nigel Godrich.

What is your vision of this year’s Psych Fest?

There will be some mapping, and the stage will be split into different fields. Screens and shapes that may reflect the mood of the night…but I don’t want to give it away.