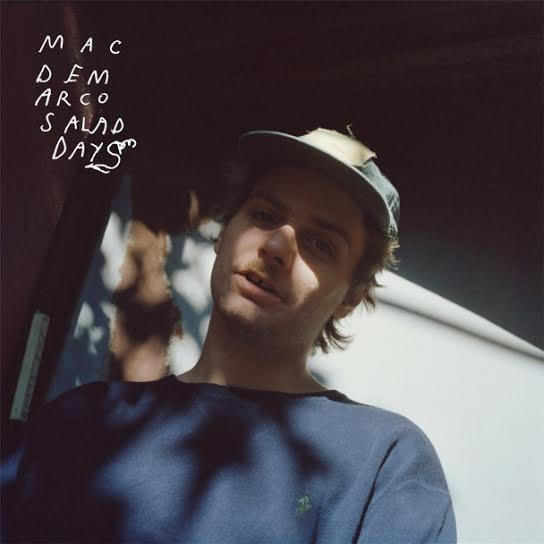 The aptly-named Salad Days is a reflection of the emotional, hopeful, and somewhat juvenile era that dominated Demarco’s last release, 2. Where 2 focussed on themes like love (of both women and cigarettes), slackerism, and makeshift meth labs, Salad Days is a fading recollection of those things, coupled with the regret and triumphs gained thereafter. Demarco’s first release, the cheekily ironic and sometimes uncomfortable Rock and Roll Night Club, is the first sip of beer, 2 is the peak of the party, and Salad Days is the morning after when suddenly your friends have disappeared and you’re left with only memories and a blinding hangover. With the context laid out in Rock and Roll Night Club and 2, Salad Days says a lot about the struggle of growing up and moving on. It shows Demarco’s own journey as a musician, and projects the same sense of reflection on to the listener. It’s an 11-track anthem for regretful post-adolescence.

The melancholic mood of Salad Days is evident from the beginning, opening with the title track: “As I’m getting older / Chip upon my shoulder / Rolling through life / To roll over and die.” The theme of growing older and resentful is present throughout the album, coming to a tee in the regretful “Brother:” “You’re better off dead / When your mind’s been set / From nine until five / How could it be true? / Well it’s happening to you / So take my advice / And take it slowly, brother.” However, there are still happier moments to be found, like “Passing Out Pieces.” The organ-heavy, upbeat tune takes a more carefree approach to the reflective theme of the album. The song was also released as a surrealist video, following Demarco on a spree of pointless revenge through Montreal, until he inevitably ends up in a bathtub of lettuce where he gives birth to a plastic baby.

While Salad Days takes a thematic 180 degree turn from Demarco’s previous work, the album falls in line musically with 2, although with a much more mournful tone. Demarco makes use of unexpected effects, most notably “chorus,” to provide a dissonant, sometimes dreamy quality to his guitar. The eccentric and unconventional guitar melodies are balanced by the deadpan delivery of his vocals, creating a sound similar to “slacker-rock” artists like early Beck Hansen or Sonic Youth. Wrapped up in lo-fi production, it’s easy to overlook how precise and thought out Salad Days is, especially compared to the “garage studio” sound of Demarco’s previous project Makeout Video.

The album sticks to a specific style throughout, which is broken up only once, for the track “Chamber of Reflection.” The song is driven by a synthesizer hook, accompanied by echo-y drums, a toe-thumping bass line, and Demarco’s wailing vocals. The sudden change in pace makes the repetitive hook more infectious, and Demarco’s vocals more emotional than they would be if “Chamber of Reflection” existed in its own world.

Salad Days marks a pivotal point for Mac Demarco. The theme of reflection suggests a degree of finality, not just in an era of Demarco’s personal life, but in his music. The album is an open page in Demarco’s biography, his journal, or his nudes folder, marked with a bold period. When Demarco turns the page, it will be a new story.