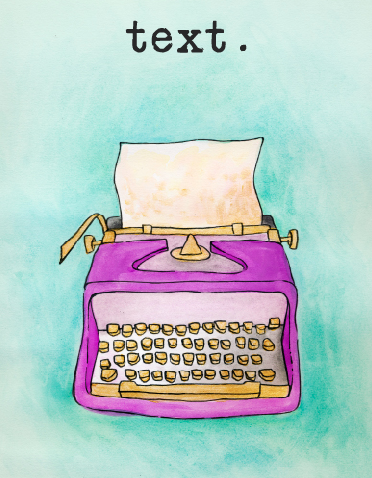 Nanaimo’s first literary magazine, text, launched for free earlier this month at the Vault Café. Focusing on the “concise and eclectic,” the 32-page debut issue features “brief poetry” from local writers, including David Fraser, Kim Clark, and Mary Anne Moore, as well as “found poetry” and art from 17 other contributors. The October 7 launch was free to attend and featured contributor readings, an open mic portion, and a live performance by local band Deep Roots.

Founded and funded by VIU Creative Writing student Shaleeta Harper with the hope of making “poetry and art available anywhere,” text can be found for free around Nanaimo, including at the Vault Café and Literacy Central, and is also available fully online. text has also started #poetryeverywhere to promote its ethos on Twitter, Facebook, and Tumblr.

The magazine’s other half, Philip Gordon, co-editor and social media manager (you can follow @textlitmag on Twitter), said the inclusion of found poetry was to diversify text from similar, existing Canadian literary magazines such as Prism or The Malahat Review.

“I had all these whacky ideas about ways to democratize poetry and make people look for poetry in things that weren’t normally poetry,” Gordon said. “Found poetry for me is like the pivotal example of what makes you consider language in a unique way; you look at a random sentence and think, ‘Oh, is that found poetry? Do I find something poetic in there?’”

For the first issue, Harper paid for production of the first thousand copy print run almost entirely out of pocket. With their second issue, the duo hopes to have text entirely funded by ads, as well as expand by at least another 12 pages. [Update 10/30: Issue 2 will have an additional 6 pages.] Gordon also said there are big plans for the future of the magazine, including the possibility of publishing in eastern Canada.

“We’ve had a couple of queries from some people in Toronto who want to distribute the magazine,” Gordon said. “The people that contacted us are part of an art museum interested in distributing because they think our message is cool.” [Update 10/30: text has been confirmed to be distributed in Toronto.]

But text is still in its first run, fresh to the public, and Gordon said there’s a lot still up in the air—especially due to mailing costs.

“When you’re printing a thousand, two thousand copies of a magazine, you need to get those somewhere. That’s tricky to do. And even with people wanting to ‘subscribe’ (even though we don’t charge a subscription fee), well the postage for that adds up really fast.”

With text, the duo have created one of the few (if not the only) free literary magazines currently in print in Canada. Wax Poetry and Art literary magazine gets a nod as another free Canadian publication, but it’s available online only. While text is still only in its first print, reception has been strong so far; Gordon said both the launch turn out and the magazine interest has been positive.

Gordon accredits the pre-launch moral support of VIU Professor Joy Gugeler for helping him get past the worry that text would “completely fail,” and that he and Harper weren’t “completely crazy” for even trying.

“I’m not just saying that because she bought me drinks after [the launch],” Gordon chuckles. “In terms of tangible, physical support: David Fraser and Ann Graham Walker from Wordstorm […] they’ve promoted the magazine at every event.”

With the launch out of the way and successful, Gordon and Harper hope their magazine will make poetry accessible and something their readers will care about.

“[text] is a vessel for people to experience poetry in ways they wouldn’t normally think of doing so,” Gordon said. “It’s the first foot in the door for making poetry something people give a shit about.”

Submissions are currently open for December’s issue, which has already received “a ton of submissions,” including some international. Guidelines and contact details are available online, and you can also show your support by tweeting or sharing your found poetry on Facebook alongside #poetryeverywhere.