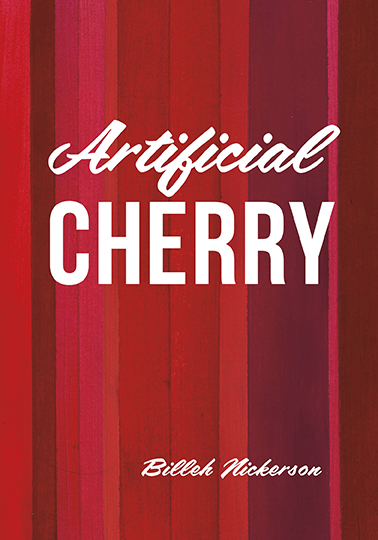 What is the purpose of a poem? Poetry, something so often tied to emotion, can be a vessel to make us feel and think—to pause, laugh, or simply consider a part of the world in a new or unorthodox way. In Billeh Nickerson’s Artificial Cherry, the poem is a tool to capture moments and put them in plain English onto the page.

The poems that follow aren’t any more serious. “Pacific Northwest Elvis Festival,” a long account of the sights and sounds of the rockabilly impersonation celebration, details the bizarre with an almost clinical gaze. “Colour of Cadillac parked outside festival reception: pink // Number of participating Elvis tribute artists: 21 // Most imposing refreshment stand on the shores of Okanagan Lake: giant peach-shaped building.” In a set of remembered poetry readings, “Pride Coffee House, Victoria” describes a performer he followed: “a lesbian bongo player who / [wore] a white muscle shirt and seem[ed] to be in a trance…” An excerpt from “Haiku Night in Canada” spits syllables in a tongue-in-cheek adherence to the origin of the Japanese form: “The hockey chicken: / puck, puck, puck, puck, puck, puck, puck / puck, puck, puck, puck, puck.”

No matter the situation, Nickerson doesn’t hesitate to reach for levity. When he goes the other direction, however, it seems like a stilted contrast to Artificial Cherry’s more natural, humourous tone. Some poems like “How Will We Line Our Bird Cages?” hint at poignancy, but it feels defeated juxtaposed against the escapades of its neighbouring poems. What’s more, its unshakingly plain and unremarkable language attempts at a deeper meaning but routinely falls flat.

Artificial Cherry isn’t without its somewhat moving moments, but the flashes of “Aha!” that come in the book are more from Nickerson’s ability to notice the subtle and often unnoticed than in anything he says about those moments. Even more troublesome, many of the poems in the book feel like they’re intent on overstaying their welcome. “Petrified,” a long poem about a conversation with a friend, builds up to a memory of a museum visit where “the curator invited guests / to decipher between / petrified wood and bone // by placing fragments on their tongues.” But the poem isn’t content to end there—we’re told the mechanics of the distinction, and even more, the explicit sadness “when an old bone’s more romantic / than most of the guys I’ve dated.” It feels like Nickerson isn’t confident in his reader; he doesn’t let the moment or revelation sink in, but feels the need to explain it before we can leave, which has the same effect as explaining a joke.

There are bits in Artificial Cherry to enjoy. As aware as he is of the humourous and the uncommon, Nickerson is able to get a few pauses and laughs before the collection runs out of pages. But after a few reads, it feels like there’s something missing. Is it the blood of poetry being more than simplicity and observation? We don’t need multi-syllabic, academic-sounding language to give the world meaning, but it seems like we might need something more than just saying the world exists—a special touch, a unique spin between the mundane and the mystical. For all the things Artificial Cherry is about, it seems to have missed that crucial separator, and deprives itself of a place in the pantheon of contemporary poetry worth more than a second glance.