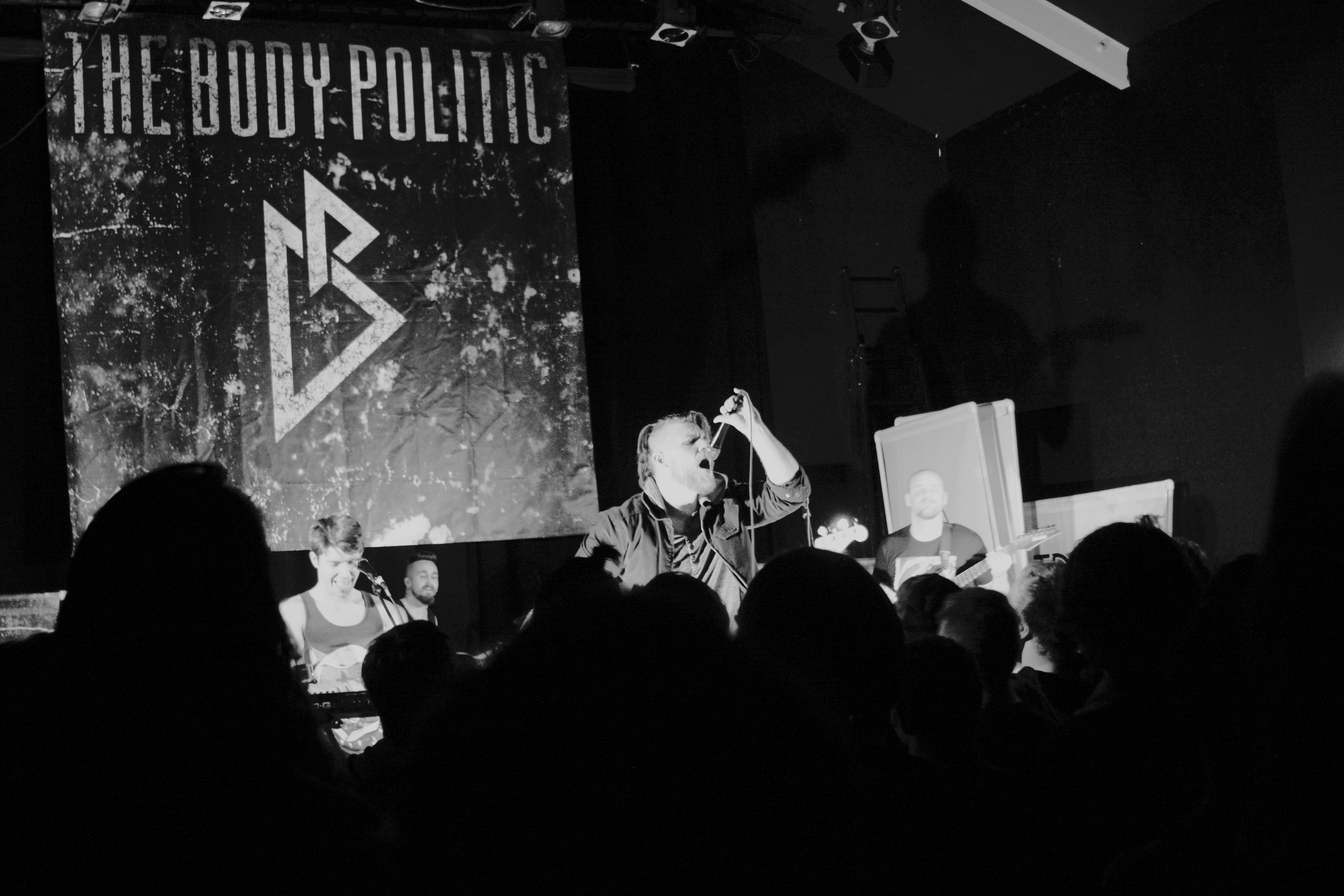 Interviewing big bands an hour before their show is an adventure. Out of the six or more members, two are usually out getting dinner, one is still at work, and one is busy selling merch. But meeting with any member of The Body Politic is also a treat, as this six-piece progressive metal formation spends most of their quality musician time touring Canada. When they came back to Nanaimo to promote their new EP Egressor, The Nav spoke to guitarist  Dan Montgomery, singer Sam Britton, and keyboardist Rob Wilkinson about the best ways to tour, the worst sound technicians,  and ultimate metal girlfriends.

Navigator: When did you go on your first tour?

Dan: June  2012. We played two or three shows on a 10-day tour. The shows were really great… On subsequent tours, the shows were more back-to-back with maybe a day of down time, whereas on that first tour it was good few days of relaxation.

Sam: The upside and downside with Canada is that you find about one promoter per city, and they change so quickly; they pop up for a couple of weeks to do a big show and after that you never hear of them again. There are one or two promoters that have stuck around, and when you come back to them, they try harder and harder to get bigger bands to play with you, which is nice.

Dan: The thing with this music genre is that a lot of these promoters are still kids in high school, and it’s pretty  tough for them to turn a profit and get a show going, especially when you’re in Regina on a Tuesday night. So yeah, even though you get better at booking, you still have to play on some off-nights.

How is this tour so far?

Sam: Probably the best. We normally have a sound guy or someone else floating around in the van with us. Having six people in the van is a godsend, but seven people people is just uncomfortable. No one is happy  when you’re squished shoulder to shoulder the whole time. We’re all big dudes—except Rob and Spencer (laughs), and when there are three of us in one row, we get frustrated a little.

Rob: Plus we’ve reorganized. We used to keep all our personal stuff and some gear with us in the van, but we’ve allocated a special part of the trailer for that. So we can stretch out a bit. We’re getting better at touring.

Dan: We’ve started to solidify a lot of relationships with people in other cities. Edmonton, for example, is like a second home for us. The turn out there will be as good as in Nanaimo, sometimes even better. It’s great. Every tour we’ve had, if we’re to think of the best show, it would be either here or in Edmonton. We’ve built up relationships with promoters and other bands as well, so we see a lot of following there, and when they come out here we make the effort to go and support them in our town.

Sam: I let them sleep on my floor.

What are the biggest pros of touring?

Sam: Fans. You have to play an area a certain amount of times to consolidate fans. If you tour once, make a huge impression, and don’t go through it again—you’re not going to have a following at all. The biggest pro is seeing all the fans you know and being able to say, “Hey, you were there six times ago and you’re still here and you buy merch every time and want to hang out.”

Dan: It’s cool to go to a city you don’t know and see people wearing your shirts at your show. And I work at Arbutus and just had a guy the other day come up and say “I’m in from Calgary and saw you play there, and heard you guys are going to play tonight so I want to see you here.”

Sam: The other big thing is bands. We are fortunate to say that all the bands we’ve toured with are fantastic. They are now good friends to hang out with. Like the Quartered guys we’re with now, they’re amazing.

What was the most bizarre show you’ve played?

Sam: That was so—

Rob: What about the German cultural centre in Regina? The German basement!”

Dan: It was a schnitzel house factory. It wasn’t the worst show, but it was kind of different.

Sam: There were great kids, but also these meese (or mooses?) everywhere on the walls.

Dan: The most recent show at Red Deer was pretty interesting. We played at a bar which was located in a strip mall. Imagine going to a show in a bar at Country Club—”

Sam: —and some guy ended up getting beaten. It was one of the shows when you think, “I don’t want to do this right now.”

Rob: The show in Edmonton was pretty bizarre. We only released our EP Egressor a month ago. People were jumping around and singing the lyrics and were excited. But some of them got maybe over-excited, and the mosh pit got pretty intense. Then Sam jumped in at the end and sprained his ankle because he slipped on some beer.

Sam: And then Dan’s girlfriend broke her nose.

Dan: She can definitely do the mosh dancing, but she was kind of on the side of the pit of men flailing about and there was some stray elbow or hand that caught her and busted her nose, so we spent eight hours in the emergency room.

Dan: She took it like a champ, too. When I got my nose broken, I cried and squealed like a child.

Sam: But she was laughing, with blood everywhere…

When I was doing research on your band, two different people on two different occasions told me that your music is unlike anything they know. What do you think makes it so unique?

Sam: Rob’s keyboards I think is a big thing. You don’t have very many progressive metal bands with keyboards. We’re also kind of a blend. Most of the guys who were in the band before us played classic rock and they’ve gone through phases of picking up styles like classic rock, really classic rock, and then they slowly moved into progressive metal with all these modern influences. It might feel like a throwback to old styles but it’s not.

Dan: I find that when you listen to a new artist these days, you can often hear their influences on their sleeve in a big way. The big divide for me is  the people who can take influences you wouldn’t think of that way and incorporate it seamlessly and make something really cool. Guys like Periphery or Misery Signals or Contortionists. Who knows what they listen to but they’re awesome.

Sam: We all went to school together for jazz. I mean, almost all, minus Jesse. So we are influenced by jazz as well. I studied guitar and played acoustic music, and Dan studied guitar. We have a lot of different styles under the belt.

Rob: Also, our songs benefit from actual composition. There are a lot of bands that lay a heavy riff on a heavy riff, one on top of the other. We try to compose our songs so that each part leads to another with some kind of a flow.

Do you have any artistic or musician pet peeves?

Sam: There are a lot of things that drive me nuts. Most of it comes down to live shows, when people come after doors close or far too early and wander around.

Dan: Sometimes, when shows aren’t going great, you get a lot of front man antics, when they try to do crowd banter but they’re just really frustrated and go, “Yeah I need to see you all moving more! I want a circle pit!” and there are like four kids and their parents.

Rob: I don’t have a ton of peeves, but I don’t like when things aren’t mixed  well, or when it’s too loud. It’s hard to not be loud, but once, when I played with my old band, the sound was so loud that everyone left covering their ears. It was amazing, the sound guy was up there, and the band didn’t say much about it. I felt weird.

Sam: We used to have Wilson [Pascoe, sound engineer] tour with us and do sound, but the last couple of times he hasn’t been able to because he can’t leave his job. It’s amazing to see the horrible sound men we get sometimes. We had one in Vancouver who just got up and went to Quiznos when he was supposed to be sound checking us. We were all sitting up on stage waiting for him; it was brutal.

You have a show in a couple of hours. How are you going to get in the mood?

Rob: I’m going to light some candles and take a nice hot bath with bath salts.

Sam: I like to have some time away from the crowd, because being in there and yelling and talking the whole time makes your voice half- gone by the time you get on stage. So I go and sit in the van for a bit with my eyes closed and breathe. And we warm up and stretch pretty profusely. And that’s about it. I wish we did something cool, but nope.

Dan: We don’t have any pre-show rituals.

Sam: But we do the intro where the mood builds up nicely so it gives you a second to get your head right.

Rob: We have one ritual I suppose.We gather up on stage in a circle and say a secret chant.

How secret is it?