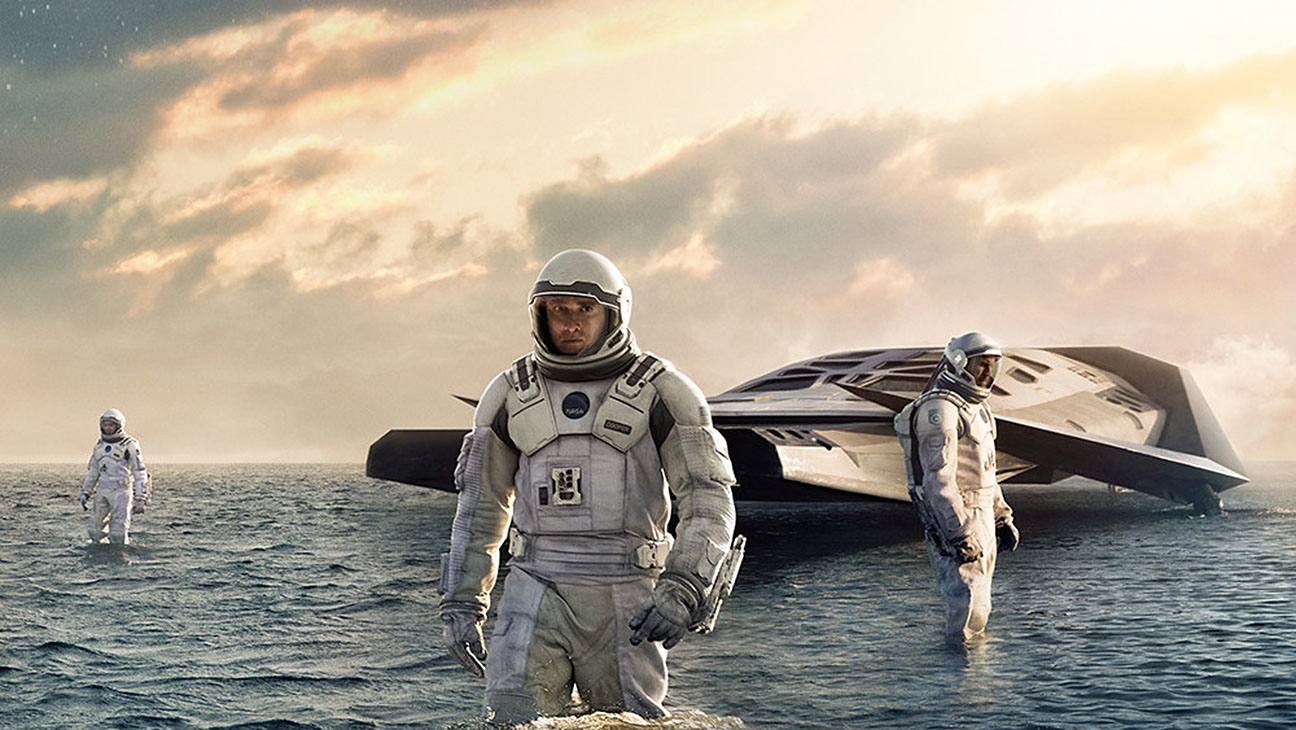 Five seconds is all it takes to recognize a Hans Zimmer score. You hear the droning bass and the strings section all playing one note. The score is just as boring as his last one, albeit with a little more colour than usual. Coincidentally, this is exactly what you could say about Interstellar.

By now, everyone should recognize Christopher Nolan. After sling-shotting himself to fame with the reverse-plot thriller, Memento (2000), Nolan went on to direct the Christian Bale Batman trilogy and the excellent mind-bender, Inception (2010). Nolan is rigorously technical with his approach to filmmaking and writing; this can work to his advantage in the case of Inception, but not so much with the poorly structured The Dark Knight Rises (2012) and the dull Man of Steel (2013). Although Interstellar suffers greatly at the hands of Nolan’s writing, it does achieve some stand-out technical moments.

It is the near future, and humanity is slowly dying out due to lack of food and a continuous dust bowl effect. Blights have been continuously wiping out certain crops, leaving corn as the only crop left untouched. Caught in the middle of this is Cooper (Matthew McConaughey), a widowed, former NASA pilot and engineer who now helps run his family’s farm. Cooper hates being a farmer, but has no choice since the demand for engineers has diminished in the reversion to an agrarian society. This gets further exemplified when Cooper’s son, Tom (Timothée Chalamet), gets fast-tracked to agriculture by the school system, even though Cooper wants his kids to be engineers. The school itself is comically anti-science, with textbooks proclaiming that the moon landing was all government propaganda and that NASA spending was a waste of money.

Things start to get weird when Cooper’s daughter, Murph (Mackenzie Foy), blames a ghost for knocking books off her shelves. Later, a pattern of dust begins forming on Murph’s floor after a dust storm, which Cooper discovers is binary coordinates to somewhere in the middle of the desert. After investigating, it turns out to be a secret NASA base run by one of Cooper’s old university professors, Professor Brand (Michael Caine). NASA is days away from sending a search team into space to investigate a wormhole, which may lead to a habitable planet for the surviving members of the human race. Conveniently, NASA happens to need a pilot with experience, so Cooper takes the job.

NASA has already received some data from another team (referred to as the Lazarus Mission) that was sent through the wormhole. Contact with the Lazarus Mission has been sparse, but their intel has helped ascertain what planets are worth visiting. The team makes it through the wormhole in one piece, but are met with a dilemma when one of the planets they are to visit is close to a black hole (translating to one hour on this planet equaling seven years on Earth). During the space team’s mission, we see Cooper’s kids on Earth grow up, with Tom (now played by Casey Affleck) taking over the family farm, and Murph (now played by Jessica Chastain) working for NASA under the direction of Professor Brand. Past this point, the film quickly falls apart.

The majority of the film is primarily concerned with being as scientifically accurate as possible, to the point of being robotic. During production, physicist Kip Thorne leaned over Nolan’s shoulder and laid down strict guidelines to secure his help: “nothing would violate established physical laws, and that all the wild speculations would spring from science and not from the creative mind of a screenwriter.” Co-written by Nolan and his brother, Jonathon, it is clear that their primary concern was the hows, whys, and whats of everything that is happening. Not a moment goes by on that spaceship where somebody is not stating the obvious, just to let you know how smart they are. By the time the final act is reached (and you’re supposed to buy into the idea that if time can be a quantifiable energy, then so could love) the amount of disbelief it asks you to suspend is insane.

This would not be such a problem if the film actually spent some time being a bit quieter and  more whimsical. So much energy is spent on giving a thorough physics lesson that the film loses some of its mystery and room for emotional development. Visuals that should be awe-inspiring and left to wash over you are undercut by endless banter. This is why Inception works so well: it left a degree of mystery that Interstellar is missing. Originally, the film was meant to be directed by Steven Spielberg, and I can see where Spielberg would have danced circles around these issues. It would have been a less scientific film, but it would certainly be a better film overall.

Despite this, McConaughey and Chastain gave fantastic performances. McConaughey has been on a roll with Mud (2012) and Dallas Buyers’ Club (2013), and he continues to be a great all-American leading man. On the other hand, Anne Hathaway, who plays one of the main members of the space team (also Professor Brand’s daughter), does not present much beyond her usual annoying, emotional affectations. Caine is back for his sixth Christopher Nolan film, and fills in his stereotypical role of being the guy who says, “I’m asking you to trust me,” and, “I give you my word.”

What the film does have going for it is some of the technical qualities. When the film isn’t suffering from J.J.-Abrams-lens-flair syndrome, there are some stunning shots using both props and CGI. Nolan took a lot of inspiration from 2001: A Space Odyssey (1968), which inspired him to use prop spaceships rather than CGed ones, for the space shots. It looks great for most of the film, except for a couple moments where it gets sloppy and ends up looking like a home movie made by 12-year-olds. At least there was flawless detail to the sound editing; when the camera sits in space, everything is ominously quiet, no matter how loud you think the moments should be. Overall, the CGI, the planetary shots, and the sound editing are what saves the film from being a complete sham.

Interstellar suffers from a lot of things, but what remains the most bothersome is how derivative it is of 2001. When you set out to make a sci-fi film like this, there is obviously going to be some influence (Nolan himself believing that art is not made in a vacuum), but there is a fine line between being inspired and copying. This theme of copying is shown when McConaughey’s facial expressions during a space travel scene perfectly mirror Keri Dullea’s when Dullea is travelling through the colourful vortex in 2001. When a film goes to that extent to copy another one, you’re much better off just watching the original.

This film is going to divide a lot of people. Depending on how many sci-fi films you’ve seen, and what you take away from the film’s final act, Interstellar will either amaze you or annoy you. Interstellar is not a terrible film, but it is derivative. Not even its technical achievements can save it from pacing issues and prop mishaps. Those of you who are expecting great things of this film will be disappointed. Go see Big Hero 6 instead.