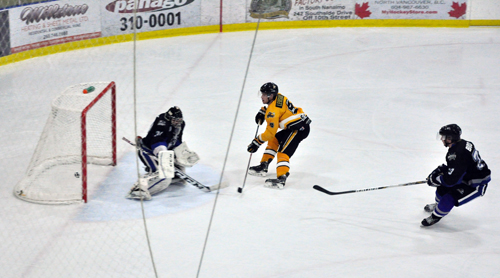 As the calendar turns over to December and the VIJHL season hovers around the halfway point, there is still plenty of hockey to be played. But it’s starting to look like the Comox Valley Glacier Kings and Nanaimo Buccaneers are likely to meet in the first round of the playoffs.

The two teams sit second and third respectively in the league’s North Division. The Campbell River Storm are well ahead in first place in the division, while the Oceanside Generals sit a massive 20 points out of a playoff spot. But the race between the two clubs for home ice advantage in the playoffs is still very much alive, with the two teams separated by just two points in the standings.

The last game between Nanaimo and Comox Valley was a crazy one, with the Glacier Kings picking up a 9-8 overtime victory on November 22 in Comox. The Glacier Kings led 3-2 after the first period. The Buccaneers fought back in the second, tying the score at 5-5 heading into the third period. Jared Fedosoff and Carter Turnbull scored two early goals for Nanaimo to give the Buccaneer’s a 7-5 lead early in the third.

Comox got power play goals from Grant Iles and Dylan Sampson to tie the game at 7-7. At 14:20 of the third period, Chad Bell scored to give Nanaimo an 8-7 lead. Bell’s goal looked like it was going to stand up as the game winner, but Sheldon Brett tied the game for Comox Valley with just 12 seconds left in the game, sending the game into overtime tied 8-8. In overtime, Iles scored his third goal of the game to give Comox Valley the victory 9-8.

The Islanders actually led 5-3 with eight minutes left in the game. But Nanaimo got goals from Fedosoff, Liam Craig, and Coleman Downey in the game’s final minutes to get the victory.

The Buccaneers’ next home game is Thursday, December 4, as Nanaimo takes on the Comox Valley Glacier Kings. The Buccaneers will have revenge on their mind, as they try to exact some form of payback after that 9-8 loss at the hands of the Kings. Puck drop for the game is at 7:15 pm.

All home games are played at the Nanaimo Ice Centre below campus.