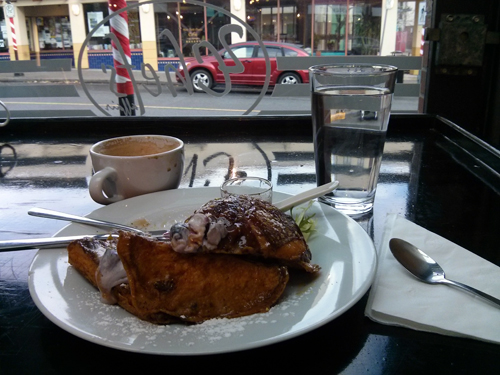 I visited Two Chefs Affair on the weekend with a friend, where we enjoyed people-watching at a table overlooking Commercial St. The colourful and eclectic artwork provoked a lengthy conversation, though overall it seemed like a function-over-form establishment. The restaurant was inspired by romance, but isn’t romantic itself. It’s a breakfast and lunch establishment, not at all about candlelit dinners.

Two Chefs Affair occupies a cozy nook, like many of the restaurants downtown. We were both amused at some of the romantic/poetic menu options, but I’m always the difficult one; I ended up wanting something from the breakfast menu which they stopped serving hours before.  In prime “the customer comes first” form, the waitress sweet-talked the chef into whipping up Love at First Bite (aka French toast). The thick wedges of eggy bread were fried crisp and spiced with pumpkin, cinnamon, and vanilla bean and served with blueberries, sweetened cream cheese, and a side of real maple syrup. The flavour combinations were delightful: the cream cheese softened the sweetness of the syrup, and the sharp tang of the blueberries cut right through the thick bread. At only $9, it was a great deal.

My companion’s lunch dish had another curiously poetic name: Cheating Hear—a grilled braised beef and Monterey Jack cheese sandwich on sourdough bread with a side of soup, which was the highlight. The soup of the day, curried cauliflower with mango and a thick cream topping, was spicy and flavourful. A filling meal, this one was also a steal at $12.

Two Chefs Affair, in the heart of downtown Nanaimo, was a fun place to dine with a friend before heading to a funky boutique or shopping for records.