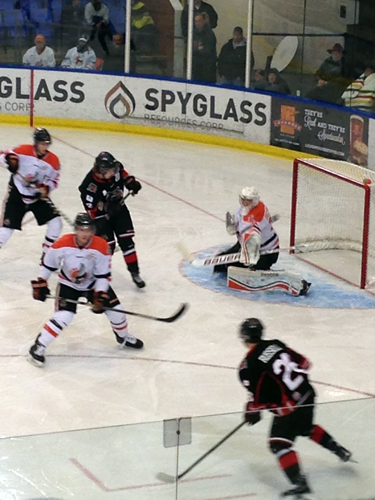 Every time the Nanaimo Clippers suffer a setback, they bounce back. This setback saw the Clippers drop back-to-back games to the Victoria Grizzlies.

On Wednesday, November 19, the Clippers fell behind early in the second, allowing Victoria to take a 4-2 lead heading into the third period. The Clippers got goals from Jake Jackson and Brendan Taylor in the third period to tie the game at 4-4. But a late power play goal by Zach Dixon allowed the Grizzlies to pick up the 5-4 victory.

The two teams faced off again two nights later in a game that ended in an eerily similar fashion. This time Taylor tied the game 2-2 with just under eight minutes to play, before Jake Emilio scored on a late Grizzlies powerplay to give Victoria the 3-2 win. But since those back-to-back losses the Clippers have been on a roll, winning four straight games, including a 3-2 victory over Victoria on November 28.

In that game the Grizzlies jumped out to a 2-0 lead in the first period. But the Clippers battled back, getting goals from Jacob Hanlon and Cole Maier to tie the game 2-2 heading into the third period. After neither team could score in the third, the game went to overtime. In overtime, Sheldon Rhemple scored the game winning goal for Nanaimo.

The Clippers’ recent four-game winning streak has also included two victories over the Alberni Valley Bulldogs. The Clippers picked up a 5-2 win on Wednesday, November 26, before taking a 3-2 win, on Saturday, November 29. Both Clippers wins over the Bulldogs came on the road in Port Alberni, which is a very difficult arena to win in as the road team.

The other win during the Clippers’ four-game winning streak was a 2-1 victory at home against the Trail Smoke Eaters. Brett Roulston scored for the Clippers in the second period and Harlan Orr answered for the Smoke Eaters, sending the game into the third tied at 1-1. With less than 20 seconds left and the game looking destined for overtime, the Clippers were given a power play.

During that power play, Taylor scored the game-winning goal with just two seconds left in the game, giving Nanaimo a 2-1 victory. The Clippers currently sit in first place in the BCHL’s Island Division. The team’s 20-8 record gives the Clippers 40 points on the season, eight more than second place Powell River Kings, who have a record of 13-7-0-6.

The Clippers’ 40 points puts them in second place in the entire BCHL, behind only the Penticton Vees, whose record of 23-4-0-1 gives them 47 points on the season.

Puck drop for both games is at 7 pm. The Clippers play their home games out of Frank Crane Arena, at Beban Park on Bowen Rd.