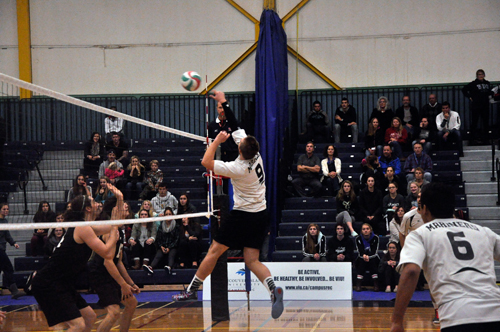 The VIU men’s volleyball team wrapped up the first half of the 2014-2015 Pacwest season with a weekend sweep over the Columbia Bible College Bearcats on November 28 and 29 in Abbotsford. The Mariners picked the 3-1 victory on Friday, November 28. The two teams met again for a rematch the following day. Tied 2-2 after four sets, the match went to a fifth and deciding set, where the Mariners picked up the victory for the second straight day.

A week earlier, the Mariners split two games against the top team in the Pacwest, the Douglas College Royals. The Mariners picked up the win in the first game played between the two teams, November 21, at the VIU gym. The Mariners handed the Royals their second loss of the season with a 3-0 victory. The Mariners won the first set 25-18, the second 25-23, and finished off the game with a 25-21 win.

Douglas did manage to get some revenge on the Mariners the next night, picking up a 3-0 victory of their own.  The Mariners enter the holiday break with a record of 9-3. The Mariners’ 18 points put them in a tie for second place with the Camosun Chargers. The Mariners and Chargers are only two points back on the Douglas Royals, who have a record of 10-2.

The Mariners’ success has gained them some national attention, as the team entered their weekend series with the Bearcats as the fourth ranked men’s volleyball team in the country.  The Mariners aren’t back in action until January 16 and 17 when VIU is at home against the Columbia Bible College Bearcats.

The game on Friday, January 16 begins at 8 pm with action the next day starting at 3 pm.