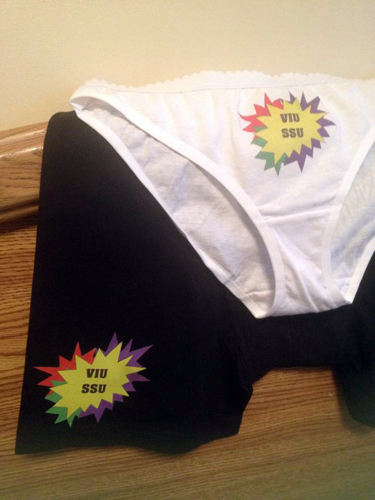 While VIU’s Sociology Students’ Union (VIUSSU) may have flown under the radar for the past few years, new executive director Carly Eldstrom is bringing the club back on course. Most recently, VIUSSU commissioned their own custom underwear, a first for any club on campus.

“Lots of clubs sell t-shirts,” Eldstrom said, “but just like in everything we do, we wanted to be a little different. We had club meetings and discussed the possibilities of scarves, coffee mugs, and other merchandise. We settled on underwear because it appealed to everyone.”

In what Eldstrom called a “social media experiment,” VIUSSU held an underwear design contest over Facebook in order to find the graphic to use on the final product. The winner was decided by public vote, through Facebook likes. The contest received only three submissions, with the winning design receiving 28 likes and the runner-up receiving 21.

The winning design was created by Katherine Cunningham, a first-year English student. Though this is the first design of Cunningham’s to be sold on a product, she said that she has been screen printing her own t-shirts for over a year.

“I’m really excited to see my design being sold,” Cunningham said. “A major inspiration for me was the super hero feel—I was going for bright colours and comic book shapes.”

VIUSSU has managed to expand their membership this year from 10 students to over 40 through a weekly study group and events like movie nights, beer and burgers, and a textbook exchange.

The club begins selling their underwear this week in the upper cafeteria and building 356. Underwear is available as men’s black briefs and women’s white bikini-style. Each pair costs $8, with proceeds supporting the Sociology scholarship.