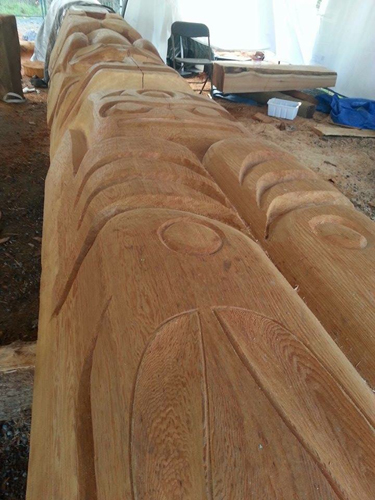 By the New Year, a large patch of land outside VIU’s Shq’apthut: A Gathering Place will have two new towering additions.

Cedar logs donated by Timberwest Forest Corp. arrived from the west coast of Vancouver Island in May 2014. Carving began in the summer months.

The totem poles, as many students can see for themselves, are almost finished the carving process, under a tent near Shq’apthut on Nanaimo’s campus.

However, the anticipated unveiling of the totem poles has been delayed until 2015, while the carvers finish the two totem poles, and the Students’ Union awaits the possibility of a third totem.

The Shq’apthut is located on the Nanaimo campus, building 170. The study area is open all day, and welcomes all students. The advisors in the Gathering Place offer similar services as counsellors and academic advisors.

Dale Hunt, an advisor for Recruitment and Retention Services for VIU, works with students at the Gathering Place to ensure they feel welcome and complete their studies at VIU.

The totem poles, according to Hunt, “represent the four indigenous families on Vancouver Island.”

The Kwakwaka’wakw is located on the northeastern tip of Vancouver Island and the adjoining mainland. The Coast Salish is on the east coast, spanning from Parksville to Esquimalt and the mirrored mainland BC. The Nuu-chah-nulth covers the remainder of west coast Vancouver Island, from Tofino to Port Renfrew, and the fourth and most encompassing family is the Métis of Canada.

“It’s a way to honour the communities that we serve on Vancouver Island,” Hunt says.

“We want this project to help make the university a more welcoming and inviting space for these students,” McCarthy said.

“Aboriginal students come from many territories,” McCarthy said in an email. VIU attracts students from all over BC and the Yukon, incorporating Aboriginal traditions and welcoming the different cultures.

“We are a choice for aboriginal learners,” Hunt said, “We’re not too big, we’re not too small.”

VIU boasts the highest Aboriginal university student population in BC, with 1700 currently enrolled—an increase of 700 in the last eight years. This number is not the highest in terms of percentage overall compared to other colleges in BC—Northwest Community College’s 40 percent enrollment is only approximately 700 students.

VIU’s faculty and Students’ Union funded the project equally, as McCarthy saw “an opportunity to engage students and create learning opportunities for all students, as well as faculty and staff.”

The project’s popularity grew during the summer campus tours for upcoming students, as they were allowed to ask questions, see the totem poles mid-carving, and interact with the carvers.

The four carvers come from the represented indigenous families, including the Ahousaht First Nation and Snuneymuxw. It was important to McCarthy to showcase the work of the artists in these territories.

“The carvers worked with elders from the territories,” McCarthy said. Together, they worked on stories to be carved for each pole. The Elders-in-Residence program on VIU’s campuses provide a similar insight to all students.

Hunt sees the elders on campus as “the heart and soul of what I believe to be the knowledge and wisdom that we look for in indigenous knowledge.”

The area by Shq’apthut is fenced off, while holes are dug and prepared for installment of the tall totem poles.

It will not be clear to most of the public viewing the poles which family is represented. Therefore, signage provided will help identify each totem, according to McCarthy.

The unveiling celebration is scheduled for January. Intending to honour tradition, a private ceremony will take place in the morning, with a public celebration later that day. More information on the ceremonies will be available once plans are finalized.