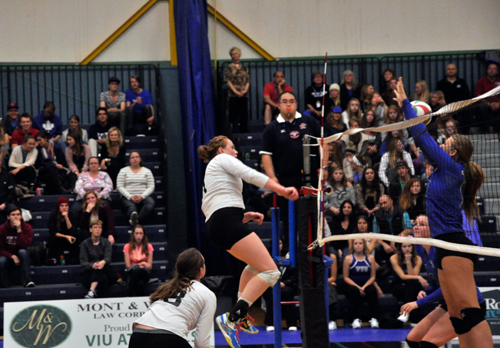 After a rough start to the PacWest season, the Mariners ended the pre-Christmas portion of their schedule on a high note. The Mariners picked up back-to-back wins against both the Douglas College Royals and the Columbia Bible College Bearcats. The four consecutive victories moved the Mariners’ record to 6-6 on the season. The Mariners lost their first four games of the season due to a league sanction for an ineligible player.

The Mariners hosted the Douglas College Royals November 21 and 22. In the first meeting between the two teams, the Mariners took the lead early, winning the first set 25-17. The Mariners dominated the second set, holding the Royals to just nine points, winning 25-9.

The Mariners traveled to Abbotsford to play their final two games before the winter break on November 28 and 29 against the Columbia Bible College Bearcats. On Friday, the Mariners continued their dominance from the previous week. After winning the first two sets, the Mariners completed their third consecutive sweep with a 25-16 third set victory.

The two teams were back in action the following night. This time the match went to a fifth set tied 2-2. In the fifth set, the Mariners closed out their second straight perfect week, winning the set 15-10 and the match 3-2. The Mariners’ 6-6 record gives the team 12 points on the season, good for fourth place in the standings, two points behind third place Fraser Valley Cascades.

The Mariners’ first game after the Christmas break is Friday, January 9, when the Mariners travel to Camosun to take on the Chargers. VIU’s next home action is the following weekend, January 16 and 17, as the Mariners take on the visiting Columbia Bible College Bearcats.

For more information on the Mariners, visit mariners.viu.ca.