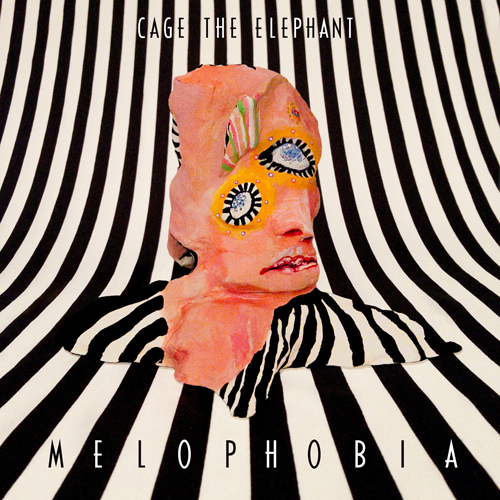 Melophobia, a fear of music, is exactly what Kentucky five-piece Cage the Elephant needed coming out of their last release. Thank You, Happy Birthday, put out in 2011, transparently borrowed from larger alternative rock acts like The Pixies and Arctic Monkeys. Though Thank You, Happy Birthday had its moments, it was a far cry from the energetic, cacophonous clusterfuck that made fans fall in love with Cage the Elephant’s self-titled debut. It was a well-made album, though it was an album that could have been made just as well by any one of their contemporaries.

The writing and recording process of Melophobia, as the name implies, involved the band distancing themselves from their aforementioned influences. By silencing virtually all music from their lives, the five musicians were forced to fill the silence, finding their own sound in the process, making Melophobia’s greatest appeal its originality. While listeners may not find anything experimental or boundary-pushing, anyone familiar with alternative rock will instantly see what makes the album unique.

The most welcome element in Cage the Elephant’s newfound style is vocalist Matthew Schultz’s surprisingly honest lyricism. The synth-filled ballad “Telescope,” in particular, sees Schultz peering into his own life, which has drifted light-years away from his younger aspirations. The song occupies the time spent home alone, as the narrator’s world begins to crumble in a fit of self-inflicted loneliness and worthlessness. For anyone who has experienced an extended period of unemployment, the song is excruciatingly relatable. While the chorus: “I don’t think you understand / There’s nowhere left to turn / Walls keep breaking / Time is like a leaf in the wind / Either it’s time well spent / Or time I’ve wasted” may have you skipping “Telescope” in the presence of company, the dose of corniness is a fair trade-off for a level of sincerity and introspection rarely seen in the genre. Even the lead single off the album, “Come a Little Closer,” is drastically darker and more introspective than their earlier work. Ironically, while the serious tone has rewarded the band with a more mature and consistent sound, the change in direction may steer them off the chart-positioning path that “Ain’t No Rest for the Wicked” first opened up for them.

Beyond the lyrics, Schultz’s vocals have also undergone a thorough refinement since the band’s 2008 debut. While Cage the Elephant’s first singles, “In One Ear” and “Ain’t No Rest for the Wicked,” saw Schultz rapping his way through the verses, he underwent a shaky transition into singing for Thank You, Happy Birthday. Melophobia sees that transition finally pay off, as the vocalist confidently belts each hook with a variety of emotions only hinted at in the two previous albums.

Within Melophobia is a level of energy comparable to the band’s self-titled album, though the bluntness of the latter has been refined to a sharp point. The band’s use of buildups, which were almost completely absent in their previous records, adds fuel to the explosive, frantic hooks that first garnered them attention.

Melophobia is the perfect showcase for Cage the Elephant’s newfound and pleasantly original sound. Despite refining their raucous style, the album maintains the energy of the band’s previous efforts. While the pop-rawness may have been pushed aside for a more traditional rock aesthetic, the band’s lyricism and musicianship seemed to have grown up rather than grow old.