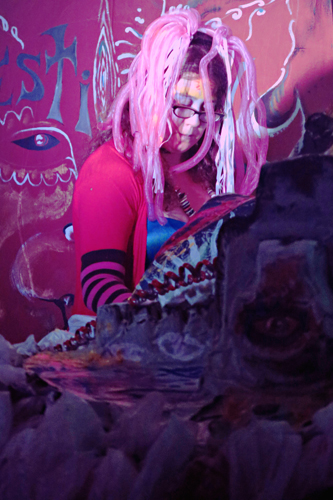 You do not overlook Valentina Cardinalli in a crowd. Wearing either a faux fur leopard jacket, a bright yellow and purple felt cloak, or at least a feeler headdress, she never just stands in the background or sits in the audience. She is  the one painting a canvas or chalking the sidewalk, accompanying live instrumental music with spoken word or announcing the next performer. Ok, maybe when there is no event on, she will sit down at a table in a café, but she will take out her scrapbook and make a collage; write down ideas on film theory; or try to figure out how to support a friend’s project, promote an upcoming show or organize the next workshop.

When asked which part of her home is the most reflective of her, she immediately points to the corner of her living room where she stores her paper maché puppet and cut-out cardboard props from recent shows. Then she heads to the kitchen, where dozens of posters she designed for events she participated in or promoted decorate the walls, the fridge, and even the cabinets. These are her “trophies,” as she describes the colourful mementos of her artistic ventures.

Valentina Cardinalli lives and breathes art, and would never think of sticking to one creative category. She is as enthusiastic about theatre, performance, film production, and music promotion as she is about visual arts. She also runs or participates in multiple artistic initiatives and projects.

Maybe for its capacity to combine all other arts, Cardinalli was first drawn to film. She left her hometown, Belleville, Ontario, and moved to New York at the age of 19 to pursue an acting career. She graduated from the prestigious American Academy of Dramatic Arts and even started her own theatre production company, but soon learned how challenging it is to fill the house in a big city.

“We did some excellent plays to the crowds of maybe six, seven people,” she recalls. “There’s just so much to do and see. You’re competing with Broadway and relying on your friends  who are on the same level as you and come out to support you after they’ve worked all day and went to their own rehearsals.”

She ended up making a steady living as an extra in movies and got to meet and work with big names.

“You will not get that here,” she jokingly compares with Nanaimo. “You will not strike up a conversation with Francis Ford Coppola in a barber shop.”

But as much as New York embodied everything Cardinalli dreamed to be a part of, she considers moving to Nanaimo with her husband and son Nico a step in the right direction, although she doesn’t recall it as a smooth landing.

“When we moved here nine years ago, it was a bit of a culture shock,” she describes switching from a big city to a rural island. “We didn’t know many people and kept busy renovating the house, building our business from scratch, and running around Nico, who was three years old. We didn’t do much else. It took time to find stuff to do. In New York, you can just open a magazine and there would be 12 things you’d  want to go to that night, but here, we didn’t know about much. There would be occasional shows—on the other hand, it was easier to get tickets here.”

The game changed for Cardinalli this January  when she participated in the Top Men’s “Le Voyage dans la Lune,” and worked with painter and actress Carly Neigum, her future collaborator on numerous projects. It was the first time she saw the potential for live art to be an integral part of any show, while also being able to fully invest herself in such a project.

In her “day job,” Cardinalli assists her husband, musician Dave Read, with his record manufacturing company Vinyl Record Guru, where her “duties” involve paperwork, promotion, and adding her personal perspective to the operation. Working from home allows her the time to focus on her many artistic ventures.

“I have more time to work on my projects because I don’t have to work full time and fit in art and other activities into my time off,” she says. “I’m doing more here.”

Pony Girl Productions, for example, is Cardinalli’s own umbrella project facilitating performance and spoken word events for guest artists. The latest and biggest event she produced was the Extraordinary Spectaculaire, a two-day mini-festival of music, readings, and spoken performance held at the Vault Café in April 2014. Cardinalli has done one-on-one performance workshops since then and is planning a public reading show with the working title “Mortified” in where participants will present their journals they kept as teenagers.

Although her art usually abounds with joyful colours and positive messages, Cardinalli draws on her darker streak, which she discovered and embraced early in life. Growing up, she remembers sewing clothes and costumes for her dolls, for whom she made up fantastical stories and worlds for them to live in. These worlds were dark and deep, full of poisonous potions and deep motives. Influenced by naïve artists such as Paul Klee or Joan Miro or a kinetic sculptor Alexander Calder or comic book author Art Spiegelman, Cardinalli is passionate about children’s art both as an activity, a source of inspiration, and the creative style she has adopted not only in painting, but writing stories and making comic books as well.

“My art definitely has a lot of id in it,” she says. “But it is not boring kids stuff; nothing ‘Disneyfied.’’ I like the fables where the wolf actually eats somebody. I like that little kid creepy stuff.”

But mainly, Cardinalli likes to think of herself as a sociopolitical artist and activist on a mission to promote arts education in elementary and high schools. Driven by passion for children’s art, she volunteers at schools and organizes art workshops, but also campaigns and petitions for a better support and staffing of art and dramatic education. One of her dreams is to see, if not organize, a science fair in the district, that would involve art, math, languages, and science. She hopes the new local government and set of trustees will support it.

“There are businesses that would bend over backwards to help make it happen,” she says, but admits it is still a tough nut to crack.

“It comes from higher up. The funding for education in general has been cut repeatedly, and we tend to blame the people in the middle and not those who make those decisions. I will continue to write letters, but I am only one person,” she says and explains that, unlike in her other groups and initiatives, people are more hesitant to join her efforts.

Her experience with AEIOU, a live-painting group Cardinalli has co-founded, is the opposite: “People come to me and say, ‘You’ve changed my life! I want to be a part of this,’” she describes the growing public interest in the group, the title of which stands for Art Ensemble Initiative Of the Universe (and sometimes Yourself). It began production in January 2014, shortly after Cardinalli’s first collaboration with Carly Neigum, with the idea of live painting on large canvases as a support performance during music shows.

“It is so neat to work with people like Carly. We don’t even need to speak. We just paint,” Cardinalli describes the creative environment at these events. “We’re lucky to have this space in Nanaimo, and the bands who want to collaborate with us.”

Cardinalli’s role is to develop initial ideas and themes visually on the canvas. The other three co-founders are painters Alejandra Cano, Chantelle Spicer, and Daniel Appell, but the crew welcomes and encourages audience participation.

“We just don’t do this enough. Our society still has these little pockets of isolation,” Cardinalli explains her motivation to connect individuals and bring them together into a creative, tactile process.

Cardinalli’s motives, indeed, extend beyond the idea of art for art’s sake. As the guest artist for the Nanaimo branch of Zero Waste, a Canada-wide grass roots environmental organization, she designs  art pieces made of recycled material—plastic bottles and bags, cardboard boxes, and broken toys that she collects on her daily wanders around town. She believes her involvement with Zero Waste conveys a strong sociopolitical message.

“I collect, wash, and recycle anything that would otherwise end up in the landfill,” she says. “All that junk  has the potential to be turned into something else. It’s so much fun. It gives everything a second chance at being used again.”

“As an artist, I have a hard time not picking up garbage on the streets,” she laughs. “My son is always embarrassed and goes, ‘mom, put it down!’ but then he thinks ‘Wait, I could use this.’ He already thinks in that same mind frame. It is about how we as a society can limit the excessive production of garbage,” she describes the main idea of the organization and the theme of her works, which include stuffed animals that have been taken apart and reassembled into new, otherworldly creatures with a third eye or extra body parts, or a giant paper maché puppet used as a dramatic prop at various events.

Cardinalli usually gives the toys away to the kids who help her make them during the school workshops.

“Making money is not my objective at all. I’ve gone down many roads in New York. I have worked for commission and it helped pay the rent, which was great, but I wasn’t able to instantly drop a project and go where I felt interested, Cardinalli says about the lack of freedom chasing profits entails. For her, visual art is about human relationships with objects in a creative, constructive way, while the final outcome is not necessarily the most important art.

“As soon as you add money to this, it changes everything,” she says.

Her inner drive feeds the desire to express ideas and philosophies she creates for herself when she is trying to understand what is real and what matters in her life.

“I’m looking for my own truth,” she says. “When I finally find it, I can’t see how that wouldn’t affect someone else’s life. When I see other artists being true to themselves in their work, it definitely moves me. It opens my eyes and ears.”

For the next project, Cardinalli is toying with the idea of time travel. A large scale indoor installation piece inspired by the stories of H. G. Welles will take visitors back and forth in time into a post-apocalyptic space where archaeologists dig up artifacts left behind from a closer future—for example, plates that replicate food onto themselves. Cardinalli plans to open this project to the public, so that everyone can contribute with their own futuristic item.

To join or contribute to any of the groups or events, befriend Valentina on Facebook, or see her at her next event, The Festivus Bash, December 20 at The Cambie.

Valentina would like to thank the following bands for collaboration, support and inspiration: