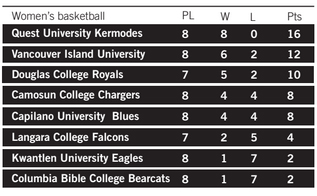 The VIU Mariners’ women’s basketball team returned from the break on a positive note. The Mariners traveled down the Malahat to Victoria to take on the Camosun Chargers and came away with a 68-48 victory.

The Mariners came out strong and dominated the opening quarter, controlling the tempo of the game from the opening tip-off. By the end of the first quarter, the Mariners had jumped out to a 22-6 lead. The Mariners kept applying the pressure to the home team in the second quarter, continuing to expand their lead. At halftime the Mariners led 34-15. The Mariners did a good job of keeping the momentum in their favour as third quarter got underway. They wouldn’t allow the Chargers to mount any sort of comeback. VIU led 54-26 at the end of the third quarter and cruised to a 68-48 win.

The victory improved the Mariners’ record to 6-2, giving the team 12 points on the season. VIU is currently in second place in the Pacwest standings, four points behind the first place Quest Kermodes, who have a perfect 8-0 record. The Mariners are also two points ahead of the third place Douglas Royals, but the Royals have played one fewer game than the Mariners.

The Mariners hit the road for their next two games on Friday, January 16, against the Langara Falcons, and Saturday, January 17 against the Douglas Royals. The Mariners’ game against Douglas is shaping up to be a battle for second place in the standings. The Royals won the only meeting of the season between the two teams 50-46 back on November 7.

VIU will return home the following week for games against the Capilano Blues and Quest Kermodes, January 23 and 24. For more information on the Mariners and their schedule, please visit <mariners.viu.ca>