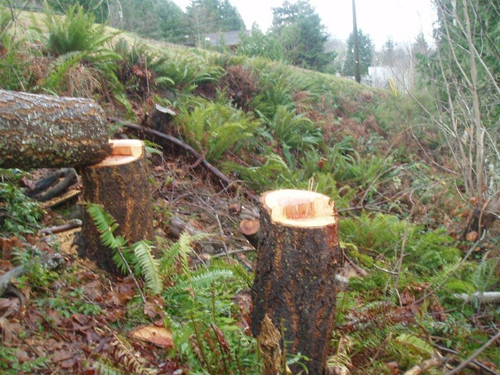 Two of the 12 trees illegally cut down. Photo courtesy of City of Nanaimo

The City of Nanaimo is asking the public for their assistance in tracking down the person(s) who were involved in an illegal removal of trees.

On November 14, 12 trees were illegally cut down on a park property on the north side of Laguna Way near Universal Pl. Of the 12 trees cut down, there were two alders, two Douglas firs, and eight Western large leaf maples.

Urban Forestry Coordinator Alan Kemp said they believe it could have been done by a professional faller.

“We found a faller’s wedge left behind, and the trees were cut directionally with proper back cuts. It was someone skilled enough to not be an amateur.”

The date of the incident is now known thanks to the help of a couple who rent a house nearby. They noticed the trees had been cut down during a day they were working alternating shifts, but never reported anything as they assumed it was a planned cut.

“There is recent subdivision development going on in the area, so it is not unusual for trees to be cut down.”

According to Kemp, the work would have taken at least five hours to do and looked as though it had been prepared to either be put through a chipper or be cut up for firewood.

According to a city press release, “the cutting took place on private property and would have taken several hours to complete. This action is a serious contravention of the City of Nanaimo’s Bylaw for the Management and Protection of Trees, and the City of Nanaimo’s Parks Bylaw. A person who commits an offence of this nature is liable, upon conviction, to a fine up to $10k per tree.”

If anyone has any information or witnessed anyone cutting trees in the area around November 14, they are asked to contact the City of Nanaimo’s Bylaw Department at 250-755-4422, or the Urban Forestry Coordinator at 250-755-4460.