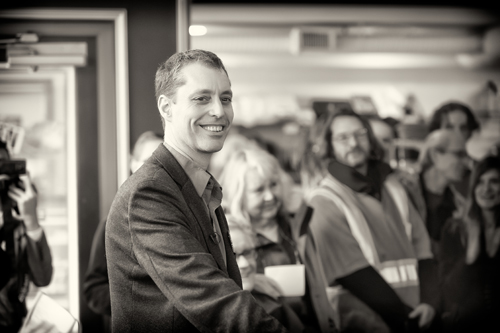 Local filmmaker and activist Paul Manly is seeking the opportunity to be the first Green Party of Canada candidate in the Nanaimo-Ladysmith riding in the next federal election.

Manly, who spent his formative years in Ladysmith, and has been a resident of Nanaimo since 2002, announced on January 5 that he was seeking this nomination.

Manly is known for his filmmaking and social activism. Many of his films touch on  subjects that he said are of high priority if he is elected.

“I’ve had a long interest in Federal politics,” said Manly.

He has worked on films that touched on International Trade Agreement, Pipeline extensions, and Tankers.

His film Troubled Water focuses on watersheds on Vancouver Island, like protected ones in Victoria, or unprotected in Nanaimo.

“Climate change is my number one priority,” said Manly. “Our current government has our country becoming a pariah state. We may not be the country that does the most polluting, but per capita we have the most carbon use.”

When it comes to changing how we use energy, Manly said, “There is so much technology and better energy out there. We don’t need to use the tar sands.”

He compares the use of solar energy to AT&T getting into the cell phone business.

“They were advised not to get into the cell phone business. It was predicted that there would be 900 thousand cell phones being used worldwide in the year 2000. The technology got better and more affordable. Solar power is cheaper and more efficient than it used to be.”

Manly said his second point of interest is electoral reform.

“The electoral system we use today is archaic.”

He said we need to change it to a way that encompasses a more proportional representation.

“Having a 25 per cent electorate with a majority in parliament is not democratic, it is an elected dictatorship.”

Manly said he wants people to be able to vote for what they want, and a minority government has produced the best policies.

“Voting for the lesser of two evils is not democracy.”

Manly has received open support from members of the city council and Nanaimo school board.

“Vancouver Island has always been environmentally minded, so I think this is definitely a winnable riding.”

Manly said he likes the Green Party because it has a good economical policy, good social programs, and does not sacrifice the environment for the social programs.

Manly said he hopes to win votes with his “vision of the future that is sustainable.”