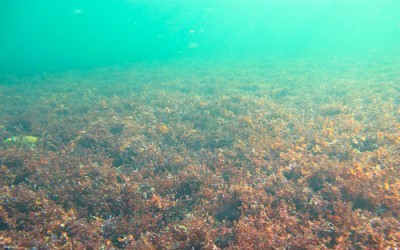 Mazella japonica off the coast of Bowser, BC. Photo courtesy Kylee Pawluck

The VIU Deep Bay Marine Field Station is currently documenting the activity of an introduced species of algae and its environmental effects.

The algae being studied, Mazella japonica (MJ), is an exotic species estimated to have been introduced 80 years ago.

The study is taking place due to it taking over the ocean floor and reaching critical mass.

Manager of the Marine field station, Brian Kingzett, admitted they don’t know much about it yet.

The algae itself has become a controversial topic in the area with two specific sides drawn.

Kingzett said the first narrative is that removing the algae is a bad thing. People on this side of things feel the algae is important and removing it will have negative effects. There are people who don’t want people harvesting the algae on their private beaches, and if the harvesting machines break down they can cause more pollution.

The second narrative is that this species is invasive and is displacing the native species and creating less complex ecosystems. There are people who see that there is an economic opportunity to be had with the 20-50 tons that wash up during the winter. There is much to gain from selling MJ as it is a valuable organic thickening agent used in processed foods as well as cosmetics and pharmaceuticals.

“It’s important to see that neither side is right or wrong,” said Kingzett. Both these points are valid, but we need to learn more about the species to determine the ecological effects it has.”

Kingzett said researchers at the field station are trying to explore all narratives and find where the truth lies in it all. “It very well could be somewhere in the middle,” Kingzett said.

There is a lot of opinion-based information to get around and quantitative work to be done. He said the research is supported and is focused on problems affecting the coastal community.

“The research is interdisciplinary and affects the quality of life and economy of the area. It is not rocket science, but the work is very diligent. Students are out here doing the bulk of the work.”

Kingzett said the marine station is a great way to get students engaged in the research process and provides real world opportunities for undergrad students.

“At the end of this we hope to publish at least one paper, and the students involved will have the opportunity to be authors on that paper.”

“The jury is still out on whether the results will be positive or negative, but the more we learn about this, the more we see we might be on the cusp of ecological change.”

The project is now moving out of the data collecting phase and into data analysis.

“Is this an evil seaweed or is it a helpful food product? Kelp and seaweed are becoming the next trending food.”

The research will hopefully lend a hand to deciding whether or not to conserve MJ or harvest it.

The issue has become a point of contention with certain members of the community.

The research is a step forward, but it is hard to do with low funding for the Sciences in Canada.

“It is hard to get funded for multi-year studies,” said Kingzett.

Kingzett wants people to know that this is a serious issue. “It’s taking place in our literal backyard.”

He added, “It’s important for us to be involved in Coastal issues. Climate and ecological change is happening, but we don’t realize it until something drastic happens. People don’t see it because it is underwater and they miss how important it may actually be. Coastal issues are important. Some people want to work off the coast; others just want to look at it. Either way, these issues will affect you.”

For more information on research being done, visit the VIU Deep Bay website.