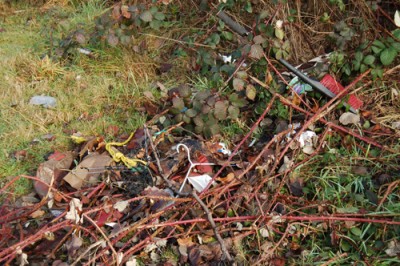 The photographs sent by a resident of Nanaimo’s College Dr. neighbourhood, who recently emailed Nanaimo’s Mayor and Council to complain about litter on the College Dr. roadway, show a boulevard littered with coffee cups, food containers, and fast food wrappers. The writer characterizes the litter as “an eyesore and an irritation.” On weekdays the area provides free parking a reasonably short walk from campus, so the implicaton is that VIU’s students are to blame.

“I think it’s likely that students are the culprits, since they, and a few VIU employees, are the vast majority of the pedestrians on that stretch, which does get a great deal of use,” says instructor Kathy Page who uses, and greatly appreciates, the access to free parking. Judging by the beer cans, weekend and partying night users could also be responsible. Dumped general household trash is also plentiful. In any event, the resident wants the City to do something about it; no matter where the trash comes from, the question is where the trash goes.

Here it’s useful to separate two very different factions: People Who Litter and People Who Don’t Litter. It’s easy to identify each in action. People Who Litter will polish off a Big Gulp, drop it, and walk away. For them, it’s a reflexive action that happens without a thought (a Borderline-Guilty Litterer may go the extra mile and hurl the cup into the bushes—an act of cover-up and/or denial). These people have probably never been stopped or questioned about their behaviour, so they don’t think to question it themselves. Or maybe they do and they just don’t care. People Who Don’t Litter, on the other hand, seem to have a reflexive aversion to dropping their trash on the ground. It just isn’t in their make-up. They will cart their litter around for as long as it takes to dispose of it responsibly. Sometimes they will go the extra mile and take care of others’ litter as well. Both of these behaviours are often set early in life, the product modeling by family and friends. For the People Who Litter, they are hard habits to break. Awareness-raising campaigns and signage can make them stop and think, but without an easily accessible garbage can, nothing will change.

When confronted with a piece of trash, a person will take one of two actions: they will take it or they will leave it.

The options for the litter not taken, the litter that’s left, are equally simple: it goes in a trashcan if available, or onto the ground. Unfortunately, without a single trashcan on College Dr., the side of the road is where it goes.

“I counted eight paper cups on my way back yesterday,” says Page, who characterizes paper cups as one of her “bugbears.” “If we didn’t use them, but carried our own, then there would be less of an issue.” (This is also an important issue. For more, see “Love a mug.”)

Taking responsibility for one’s own consumption, and the consequence of disposing of what has been consumed, is the kind of habit that can be changed, but changes in behaviour have to be supported by the environment.

“On the whole, Nanaimo is a very clean city; visitors often remark on this fact,” says Charlotte Davis, Manager of Sanitation, Recycling, and Public Works Administration. The City of Nanaimo’s Engineering and Public Works department is responsible for residential collection (garbage, food waste, and recycling), public education on handling and reducing waste, and street cleaning. City Financial Statements for 2013 place the department’s expenses at $23,844,219 ($109,207 below revenues allocated for the Engineering and Public Works Fund).

Providing service to residences accounts for the majority of the department’s budget. There is also a focus on the city core and downtown. These areas receive street and sidewalk sweeping weekly and bi-weekly respectively, while the rest of the city’s streets are swept annually. Other types of programs, such as gutter clearing, may also be implemented in the spring and fall. Since it’s made up of bare ground, the area around College Dr. isn’t targeted for service because city sweepers are unable to work on those surfaces.

According to the City’s 2014-2018 Financial Plan Review, street waste receptacles represent one per cent of the department’s budget. They’re placed in areas with high foot traffic where the most trash tends to be generated, Davis says: downtown, the Old City Quarter, Bowen Road, and the waterfront. In spite of the high foot traffic generated by students around Nanaimo’s VIU campus, the area isn’t under consideration for the placement of street waste receptacles. “We do not tend to place cans in areas that are used for parking or residential streets,” Davis says.

Also devoid of city waste cans, the South End community took matters into their own hands.

Residents placed their own trashcans—brightly decorated to deter vandalism and improve the area—outside of their homes. “I applaud anyone tackling litter in such a proactive way,” Davis says. “I would also say that they need to take extreme care when handling litter and keep an eye out for hazardous items such as needles.” This type of grassroots approach where residents assume responsibility for their own streets can work well in a community.

Another one per cent of the Engineering and Public Works department budget supports the Cleaner Community Partnership. This annual litter program covers approximately 200 km of roadside boulevards. A limited number of local not-for-profit groups participate by clearing litter from assigned roadways during March and April, earning $50 per km for their organization. The City provides maps and equipment such as gloves, safety vests, road safety signs, trash bags, and collection and disposal of the litter that is gathered. Organizations are responsible for providing volunteers as well as their own public liability insurance. Recruitment for the program begins in February. Davis is considering adding College Dr. to the program this year. It would be a good fundraising activity for one of VIU’s clubs. Going a step further, a club could choose to take on responsibility for the roadway and hold regular garbage picking activities during the school year.

The College Dr. resident who wrote to the Mayor and Council firmly believes that VIU students are solely to blame for the litter problem: “It’s a sad state of affairs when young people who are attending university for ‘higher learning’ can be so irresponsible.” A scathing generalization and indictment of the student population. When reaching out to The Navigator about this story, Davis admits, “I understand that 100 per cent of this cannot be attributed to students, but since they are the major users of the area I see it as a good place to start.”

To be fair, garbage isn’t limited to the College Dr. area. “Litter is a perennial problem on campus,” says VIU Groundskeeper Gordon Howe, with parking lots being most problematic. Waste is also plentiful on the streets around public buildings, sports and recreations spaces, and even neighbourhoods immediately bordering the areas of the city that are regularly swept and the trashcans are plentiful. Fast food packaging, beverage containers, and cigarette packaging and butts are common culprits.

“Litter is a perennial problem on campus”

The City of Nanaimo Bylaw Services Division is responsible for enforcing the city’s bylaws such as Traffic and Highways Regulation Bylaw 1993 No. 5000, which includes a $100 fine for littering. But enforcement is often generated by complaints. With only five Bylaw Officers on staff—two dedicated to Traffic and Highways—an area like College Dr. is unlikely to generate enforcement activity around littering. Without fines as a deterrent, what is the best way to get through to the People Who Litter?

Providing easy access to trashcans is an obvious solution. Awareness campaigns may improve the situation, Davis says. “We could look to have some signage placed in the area of College Dr. as a reminder, though I often think that littering is a no-brainier. Just don’t do it.” Davis is in the ranks of the People Who Don’t Litter.

Page agrees: “Publicity about the issue could help a little, as would supplying trash cans, so that there’s a place to jettison the cups and other litter. Or a regular work party to clear up?” Bringing the problem to the attention of VIU students and staff, and looking for grassroots solutions, may be the best steps towards solving it.

Nanaimo residents who are concerned with litter in their community are invited to call Public Works at 250-758-5222, or email to discuss the problem, or visit the City of Nanaimo’s Public Works website.