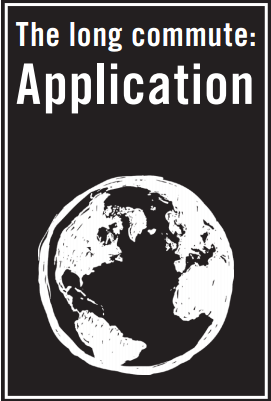 This is the first in a contributor series by Stephanie Brown. Check back next issue for the next chapter of The Long Commute.

The final semester of my degree at VIU, ironically, won’t be at VIU—I will be in England studying as an abroad student at the University of Hertfordshire in Hatfield. This isn’t the first time I’ve studied in another country; I attended a field school in Italy with VIU teachers who taught classes in Florence, but that was a much shorter trip. It’s a little more daunting to move to another campus, meet all new people and teachers, and live in foreign dorms.

I’m lucky to have the opportunity to write this series of columns about my experiences as an abroad student for The Navigator while I’m actually immersed in the program. I hope that readers will learn a little about what it’s like, pushing away any fear that may be holding them back from taking the leap into what can be a great experience for a senior student.

I applied in the spring of 2014 and was accepted by VIU right away. This is where I should probably explain. There are major differences between being an exchange student and applying directly to a school elsewhere to be an abroad student through your home institution. VIU has foreign sister schools where you can study for a semester, or a year, but your tuition is paid directly to VIU, which saves a ton of money. Another difference is that you must be accepted by two schools: your home institution and your host institution, in my case U of H. The whole process is overwhelming at first, but like anything in life, there are busy times and slow times. Acceptance came very quickly, and then things really started to happen.

One thing I recommend is to look into classes right away. I spoke to the chair of my department about it early, before I was formally accepted by U of H. Getting an idea of what is available and what you would like to take, and reaching out early, made it easier once things were formalized. Be careful with terminology: at U of H classes are sometimes called “modules,” which can be confusing when you’re navigating the website.

Studying in another country will, I’m sure, teach me a lot both inside and outside of the classroom. Pick up the next issue of The Navigator for a new installment to see how things are going.