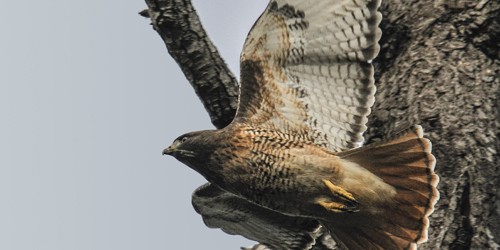 The excuses are endless: “The weather is too nasty,” “Everything’s gone away for the winter,” “I just got a sweet Playstation for Christmas.” During the colder months, it’s easy to be deterred from getting out for a hike or an expedition in search of the plant and wildlife the Nanaimo area is known for. Truth be told, many of the trails are closed and much of our well-known flora and fauna have gone dormant, or gone south, for the season. But there are still plenty of exciting ways to get out and explore the natural wonders that make this part of the world so amazing. During mid-winter and into spring, one of the best shows in town is the array of birds that choose to overwinter near our coasts and in our wetlands.

Nanaimo is home to many parks and coastal accesses, but no local area is more attractive to birders than the Buttertubs Marsh. Just minutes north of Vancouver Island University’s Nanaimo campus, created by a man-made flooding of the Millstone River, Buttertubs and its surrounding terrain offers shelter, semi-stagnant water, and a variety of nesting features that are disappearing from the ever-increasing urban layouts of southern Vancouver Island. One lap around Buttertubs’ trails reveals a plethora of ducks, though none will stand out quite like the Hooded Mergansers. These waterfoul are usually seen in pairs or larger groups (known as “flushes”), swimming on the water or flying just above. They’re easily identified by the large, ornate crest—or fin-like feathery plume—atop their heads; narrow, serrated beaks; and intricate colouring. Both genders average 45 cm in length, so they’re usually differentiated by a large white patch on the crest and series of white stripes leading to the tail on the male; and a golden-brown crest, grey chest, and long pointed tail on the female. Hooded Mergansers are common all over North America during the summer, but most head south during the winter. Coastal British Columbia’s temperate ecosystems host populations who prefer to stay in Canada year-round.

While scanning the water for mergansers, you may catch a much taller, lankier figure lurking in the shallow fringes of the bog. Southern Vancouver Island sustains a large population of the Great Blue Heron who, like the mergansers, take advantage of the coast’s warmer climates and reside here year-round. Standing more than a metre tall, the Great Blue Heron would be a conspicuous member of bog and shoreline ecosystems if it weren’t for its stealthy hunting tactics. Standing knee-deep in the shallows, dead still, the Great Blue Heron waits patiently for small fish to swim by, striking quickly with its large yellow beak, plunging headfirst into the water and swallowing the fish whole.

Through all of this feeding, nesting, and busywork, the mergansers, herons, and other marsh creatures carry on unaware that they are being watched from above by one of the great predators of the bird world. Vancouver Island is home to a year-round population of Red-Tailed Hawks. While their habitats include everything from grasslands to alpine meadows to rainforests, there is more than enough prey around our marshlands to lure the “chicken-hawk” in for a feed. Difficult to spot at times, the Red-Tailed Hawk can put on a truly impressive show, diving from great heights hunting mice, squirrels, and reptiles. These birds are often observed eyeing up VIU’s resident rabbits from atop trees and telephone poles. Roughly half a metre tall with a peppery-brown back and neck and a speckled white chest, these birds have a wingspan of more than a metre, and can be heard making that easily recognizable “cheeeew” screech, the go-to sound bite for desert scenes in cowboy western films.

Birding is a highlight, but it’s just part of what makes Buttertubs a great place to get out and explore. Throughout the upcoming semester, VIU’s Museum of Natural History will maintain a display highlighting current events in nature, emphasising happenings around the greater Nanaimo area or other parts of southern Vancouver Island. By making this information available to the public, visitors will know where to go to witness migrations, blooms, or spawns, and what to look for. Some of the natural world’s greatest stories happen in our own backyards, and while it’s easy to fall into the school/work/sleep routine, everyone can benefit from a lung full of fresh air and a greater appreciation of the natural settings around us. Watch The Navigator for future articles showcasing natural events and programs at the Museum of Natural History.

The Museum of Natural History is in bldg. 370 and is open to the public. Museum hours are available on their website and on Facebook.