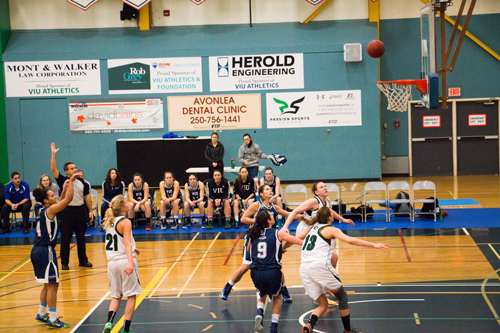 The Mariners’ women’s basketball team played their first home game of the year on January 23 against the Capilano Blues. The Mariners sent their fans home happy with a thrilling 48-46 comeback victory.

The Mariners were back on their home court again the next day, taking on the undefeated Quest Kermodes. The Kermodes came out hard and took an early 7-0 lead over VIU. But the Mariners battled back before the quarter was over, cutting into that early lead and only trailed by one, 12-11 after the first quarter. In the second quarter, Quest expanded their lead, taking a 25-17 lead into halftime. The Mariners once again chipped away at the Kermode’s lead in the third quarter, trailing 38-35 as the game entered the fourth quarter. But the Kermodes didn’t let the Mariners complete the comeback in the fourth, picking up the victory by a final score of 50-42.

The loss was the Mariners’ first of 2015, and snapped the team’s seven-game winning streak since before the holiday break. The Mariners’ 9-3 record gives the team 18 points on the season, two points more than second place Douglas Royals (8-4). The Mariners are also six points back of the first place Quest Kermodes.

The Mariners are on the road January 30 and 31 as the team takes on the Kwantlen Eagles and Columbia Bible College Bearcats respectively. The team is back home the following weekend to take on the Douglas Royals Friday, February 6 at 6 pm. They return to the court at 1 pm the next day to face the visiting Langara Falcons.