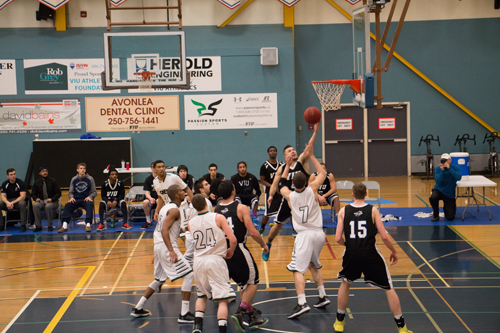 It was an up-and-down few weeks for the Mariners’ men’s basketball team as they suffered their first loss of the season on the road, then returned home to pick up their biggest win of the season.

On January 16, the Mariners traveled to Vancouver to take on the Langara Falcons in a rematch of last year’s PacWest Championship game. The Mariners got off to a strong start, taking a 17-13 lead after the first quarter. But in the second quarter the Falcons came out strong, taking a 36-29 lead going into halftime. The Mariners responded well in the third quarter, trimming the Falcon lead to four, as Langara led 58-54 heading into the fourth quarter. The Mariners tried to complete the comeback and save their perfect record in the fourth quarter, but Langara kept the pressure on and didn’t let the Mariners tie the game. The Falcons handed the Mariners their first loss of the season with a 76-69 final.

The Mariners had no time to reflect on the loss, jumping back in action the next night against the Douglas Royals. The game was tightly contested, but in the Mariners picked up the 79-74 overtime victory.

The Mariners returned home January 23 and 24 for their first two home games of 2015. Friday, January 23 the team took on the visiting Capilano Blues. The Mariners put on a show for the home fans in the first quarter, jumping to a 33-11 lead. The Blues managed to keep pace with the Mariners in the second, but VIU’s hot offense wouldn’t let Capilano cut in. The Mariners led 60-38 at halftime. The Mariners’ offense kept up their torrid shooting pace in the second half, scoring at least 100 points for the second time this season and winning their first home game of 2015, 105-63.

The next day, the Mariners faced off against the Quest Kermodes in a battle between the top two teams in the PacWest standings. Both teams came in with 10-1 records heading into the game. VIU picked up the victory in the first game between the two teams 84-77.
This match didn’t deliver the same back-and-forth drama as the first game. In this contest, the Mariners jumped out to an early lead and never really looked back. By the time the game was eight minutes old, the Mariners led 24-14. Quest battled back late in the quarter, cutting the Mariners’ lead to 27-21. The Mariners took a 49-42 lead into halftime, but expanded their lead in the third quarter. As the game entered its final quarter, the Mariners were up 77-61. The Mariners withstood Quest’s comeback attempt in the fourth quarter and picked up sole possession of first place in the PacWest standings.

The Mariners are on the road January 30 and 31 as the team takes on the Kwantlen Eagles and Columbia Bible College Bearcats. They’re back home the following weekend to take on the Douglas Royals on Friday, February 6 at 8 pm, and return to the court at 3 pm the following day to take on the Langara Falcons.