Yarn can be spun with a plain, weighted stick, or even a mere ball. Have all the sheep in your vicinity been eaten by zombies or incinerated in nuclear blasts? Don’t fear! Rather fetching yarn can be spun out of upcycled corpse clothing, or even old grocery bags. Unfortunately, there might not be too many carbon fibre Knitter’s Pride needles laying around in the debris. Thankfully, bone and wood needles are easy to make with a sharp makeshift tool and a little elbow grease. In really desperate situations, you can always use your fingers (assuming you still have at least two of them). That group of rough-and-tumble survivors might not have a reason to include you amongst their ranks, but they won’t mind an extra mouth to feed once you’ve provided them with fashionable knitwear. With just a few of the helpful tidbits found in this guide, you’ll take comfort that your survival chances will be significantly increased. Onward, crafters!

First, let’s talk spinning. Presumably, there is a sheep and wool shortage in your area, and the government doesn’t classify wool as an “emergency item.” Chances are, there won’t be any at all in your local fallout or bomb shelter. While there may not be wool fibre abound, you’ll find that there is alternative, spinnable fibre everywhere.

Don’t let your survival crew eat that stray dog or cat; their fur can be a fantastic resource. First, check the staple length of its fur. Longer is easier to spin, but even short fur can be used, just take care to use more twist when spinning. It may be difficult to convince your comrades that these critters are worth more as a self-replenishing source of fleece than in a stew, but they’ll soon come around. Simply brush those little strays frequently, wash your newly collected fibre thoroughly, and voila—a snazzy new pair of mittens from Mittens.  If all of the local pets have already been eaten, don’t despair. Consider the other abundant resources around you. For instance, don’t discard that corpse. Does it have hair? You’ll probably find some new and interesting colours.

Too squeamish for alternative protein fibres? Vegan-friendly art yarn can be made from upcycled fabric. Simply find some clothes (preferably free of bodily fluids), rip them into strips, and knit away. Experiment with different combinations. The nice thing about fabric scraps is the versatility: the larger strips don’t need to be spun, but smaller scraps can be plied together to create funky combinations. Using this method, worn out t-shirts and other tattered clothes can be knit into brand new ultra-durable garments. Nobody’s sleeping in their beds any more, but those sheets aren’t useless to you. Plain fabric scraps can be over-dyed with tea, coffee, foraged berries, or even wild mushrooms. The local supermarket might be picked clean, but the marauding hordes probably passed by the food colouring. While you’re there, pick up some grocery bags. These too can be cut into strips and knit into fashionable carryalls.

But what if your Ashford Elizabeth spinning wheel has been repurposed as firewood? Don’t panic—make yourself a drop spindle. A drop spindle can be made out of almost anything as long as it is heavier at the bottom than at the top. Scour the decimated ruins of your town for a CD, a screw hook, and a wooden dowel, and you’ll be spinning merrily along in no time. Simply affix the CD near the bottom of one end of the dowel for weight, and screw the hook onto the heavy end of the dowel for a top-whorl spindle, or the lighter end for a bottom-whorl spindle. Not as posh as a Kromski, but it will work just fine. While everyone else is hunting for trivial things such as clean water, food, or shelter, you’ll be on the prowl for hooks, sticks, and dowels (and you probably won’t have to fight anyone for them).

Perhaps you are living in a hole or up a tree, and have absolutely no access to civilization. Good for survival, but bad for crafting. At any rate, don’t fret—you can make a Russian spindle by carving a stick so that it’s heavier at the bottom and pointy at the top. If you can scavenge a bowl or rounded dish to spin it in, so much the better. No sharp object on hand? Check out How to Make a Shiv or Severing Temporal Lobes for Beginners. Nevertheless, if you can find a ball or similar spherical object, you can still spin yarn. Simply tie your leader around the ball, and twirl in mirthful joy while holding your fibre, letting the ball go further and further away from you as you draft. Once you have a good amount of yarn, stop twirling, wind your freshly spun yarn around the ball, and repeat. Give yourself a little pat on the back and take heart—you might not have a weapon or even a dim hope of survival, but you still have yarn.

If you have followed the versatile, handy steps in this guide, you should be well on your way to finding new fibre and spinning yarn. But what to do with your newly spun skein of lofty human hair or your funky sheet yarn? Knit it up! Aw, fiddlesticks, your needles are in your knitting basket sitting beside your favourite recliner in your living room, which is now inconveniently inhabited with uncouth flesh-eating undead. Don’t risk dismemberment. Dowels can be sharpened with a crayon, pencil sharpener, or even a crude shank. Windfall tree branches can be sanded into various-sized sharp points for sock knitting, and for those with strong stomachs, bone needles are both hard-wearing and easily accessible. Hey, if you make a good, sturdy pair of needles, you don’t need to worry about carrying a weapon—good for cabling and piercing skulls. Dual-function is the name of the game in the apocalypse. If all else fails, arm or finger knitting is always an option, providing you still have at least two.

And remember, don’t just restrict yourself to knitting attire. If your local climate is unsuited to camping outside, knit yourself a thick blanket double-quick with some curtain rods and salvaged sheets, or knit a handsome yet functional zombie barrier with some hefty rope and a couple of broom handles. A gun cozy is a must-have. But beware of causing a fight among your group once they see the hammock you have knit yourself. Or, why not make a pompom garland to festoon your local fresh water source. You don’t need a pompom maker, just wind the yarn around your hand and tie it off between your middle and ring finger. Instant shabby-chic!

Hopefully, this guide has acquainted you with more primitive ways of fibre processing, spinning, and knitting without luxury blue-faced Leicester and silk blends, golden-tipped rosewood needles, and lacquered, double-treadle spinning wheels. The absence of expensive tools doesn’t mean there aren’t other resources. Go forth and survive without them. Don’t forget to look on the bright side: the death of society as we know it has spawned an exciting new era of extreme DIY crafting! 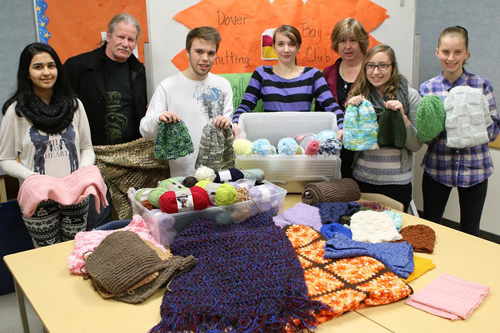