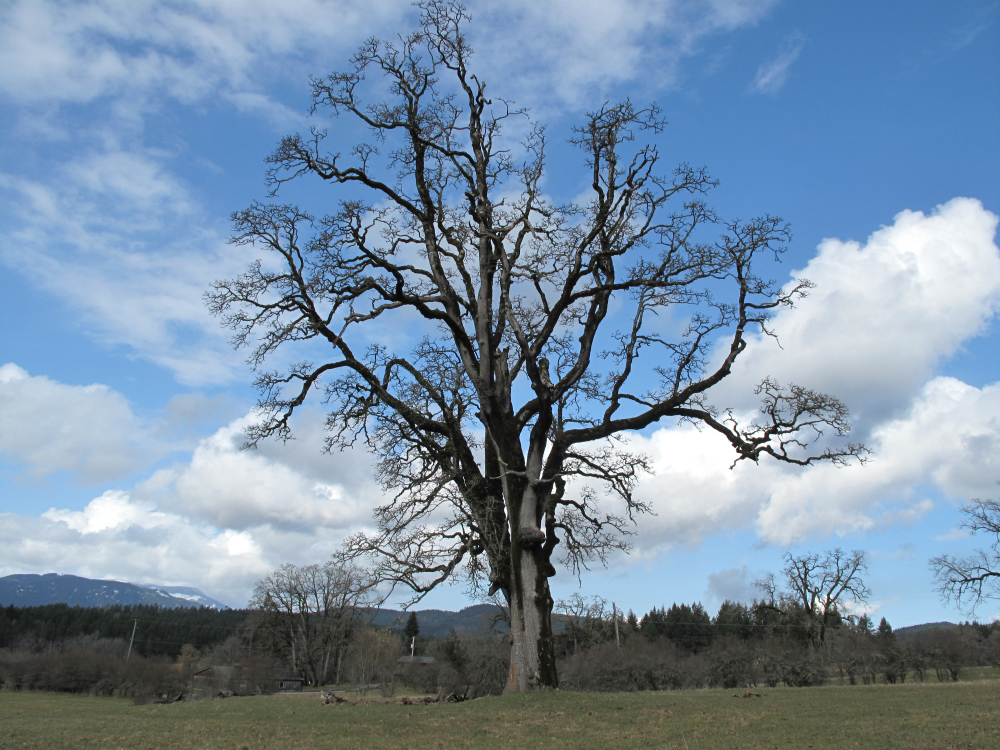 Sitting in the lee of the Vancouver Island mountain range, much of the south-east shores of our island are graced by mild climates and relatively low precipitation—a rain shadow effect. These conditions have given rise to different types of forests than the damp, evergreen systems we associate with the rest of the BC coast. Here, the coniferous trees give way to deciduous, shrubs are replaced by grasses, and we find ourselves in the land once dominated by the Garry Oaks. For thousands of years, these forests were a source of food and medicine for our local Coast Salish peoples. Today, they have become emblematic of our temperate region, but only in minute pockets compared to their historic range. Once, they covered the majority of the coastline from Campbell River to Victoria, and filled valleys all the way up to the alpine, but less than 10 percent of the historic range of the Garry Oaks remains today. The rest have fallen to make way for agriculture and housing, or succumbed to the pressure of introduced invasive plants. There are still a number of areas where people can visit and enjoy these remarkable sites, including a couple in the greater Nanaimo area.

Just three kilometers to the south of VIU’s Nanaimo campus, Harewood Plains offers a chance to see what much of our region would have looked like until just a couple hundred years ago. Here stands dozens of hectares of relatively undisturbed stands of the gnarled, haunting oaks that are so distinctive amongst our increasingly coniferous-dominated region. Depending on the conditions, Garry Oaks can reach anywhere from five to 25 metres tall, with heavy, sporadic, branches splitting the tree from just above the ground, and thick channeled bark running vertically up the trunk. Their deeply lobed leaves fill out the tree’s generally roundish shape through the spring and summer before falling in the late autumn, leaving the bare skeleton of branches to wait out the winter months. Live or dead, these trees provide irreplaceable habitat for countless species of birds and insects, and their soils support the highest diversity of plants of any ecosystem on the BC coast.

It isn’t just the trees themselves that make these ecosystems so unique. Beginning in February and running through June or July, the apparent winter barons beneath these giant trees light up with one of the most incredible displays of colour and aroma in our area: the springtime wildflower bloom. Amongst the pinks of the Sea Blush (Plectritis congesta) and the yellows of the Common Monkey-flower (Mimulus guttatus), Harewood Plains is home to what is believed to be over 90 percent of Canada’s population of the Bog birds-foot trefoil (Lotus pinnatus), a handsome leafy herb with rings of two-toned yellow and white flowers that is otherwise seen at limited sites around Ladysmith and Gabriola Island. The significance of this legume was recognized in 2011 when it was declared the official flower of the city of Nanaimo. More prevalent still is the Common Camas (Camassia quamish), a lily so ubiquitous in healthy Garry Oak regions that, at times, it appears to engulf the entire forest floor. A single plant will reach 70 centimetres tall and have numerous grass-like leaves growing from its base. In late February or early March, five or more purple or deep blue flowers sprout from the very top of its stem. Amongst the earliest blooming lilies, the flowers of the Common Camas have been an important indicator for the Coast Salish people who found an important food source in its roots. In the early springtime, the bulbs would be collected and steamed for up to 24 hours in huge pits in the ground. Through controlled burning and early agricultural practice, Camas have been cultivated by the Coast Salish people for thousands of years.

45 minutes down island from Nanaimo lies another great stand of relatively intact habitat, the Cowichan Garry Oak Preserve. Located just outside of Duncan on the shores of Quamichan Lake, this parcel of 54 hectares is managed by the Nature Conservancy of Canada, providing a study and research site for these unique ecosystems. Over the past few years, an amazing process of species rehabilitation has been unfolding here. Since the mid-1950s, populations of the Western Bluebird (Saialia mexicana) have been in steady decline. On Vancouver Island and around the Salish Sea/Strait of Georgia, the Western Bluebird has relied heavily on the Garry Oak meadows and savannahs for nesting and feeding. Their population decline appears to be closely tied to the decline in Garry Oak habitat. By the early 1990s, researchers realized these birds were no longer breeding in the area, and in 1995 they were declared locally extinct in the province of BC. But since 2011, working alongside groups beginning similar work in the San Juan Islands, the Garry Oak Ecosystem Recovery Team (GOERT) has been spearheading a project reintroducing Western Bluebirds to habitat on southern Vancouver Island. GOERT’s focus has been based on securing and rehabilitating Garry Oak habitat as well as reintroducing Western Bluebird populations; if the forests continue to decline, any introduced birds would likely go the way of their predecessors. In 2011, GOERT biologists began reintroducing Bluebirds captured from populations in Washington state into the Cowichan Garry Oak Preserve, and in 2012 a pair was observed nesting and laying eggs for the first time in BC in 15 years. Since then, 44 adults and 34 juveniles have been released, putting the project half-way towards the goal of 90 adults, the theoretical minimal number for such a bird population to be viable.

GOERT is a non-profit group based in Victoria, BC, with ecosystem-recovery projects throughout southern Vancouver Island, the Gulf Islands, and the BC lower mainland. To learn more about the Western Bluebird reintroduction project as well as other conservation initiatives they are working on, visit their website. Closer to Nanaimo, examples of the Western Bluebird and more information about our local Garry Oak ecosystems are available at VIU’s Museum of Natural History in bldg 370 at VIU’s Nanaimo campus. New displays are being put together weekly, and throughout the springtime the museum team will be holding draws for fun prizes. The museum is open to students and the public on Mondays from 10:30 am to 12:30 pm, Tuesdays from 1:30 to 2:30 pm, and Thursdays from 11:30 am to 1:30 pm. More information is available on their Facebook page and website.