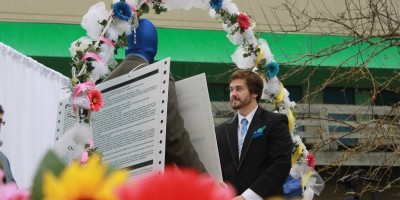 The VIUSU Debt Wedding on February 19 went off without a hitch. The event aimed to inform students about the high interest rates paid on student loans.

On Tuesday, February 17, the BC Liberals released their budget in Victoria. The following day, Christy Clark spoke at a luncheon in Surrey rather than attending the legislature in session at Parliament in Victoria.

Clark joked and laughed at the luncheon, boasting her third consecutive balanced budget as her time as premier. She intends to use the $879 million surplus to pay off the province’s $5 billion debt incurred over four years from 2009 to 2013.

The Globe and Mail said in an article last week that while this balanced budget is good for BC in general, it was only accomplished by “shortchanging areas such as education.

“And Ms. Clark has made balancing the budget a big part of her political brand.”

However, while this news is good for Clark and her party, it does not change anything for BC post-secondary students, who suffer high fees and interest rates on their BC student loans. Zachary Crispin, Chairperson of the Canadian Federation of Students-BC (CFS-BC) said, “Interest rates in Canada have never been lower, yet this government charges the highest interest rates on student loans in the country.”

The CFS-BC explains that with interest at two and a half to five percent, a BC student can end up paying over $10k on “the average student loan” in additional interest.

“Every other province charges less than what BC charges,” said Michael Olson, Executive Director of the VIUSU. Olson added that provinces like Nova Scotia, Manitoba, and Newfoundland and Labrador have eliminated the interest on their provincial portions of student loans.

In a poll conducted for the CFS-BC, 77 percent of students want to see interest rates eliminated or reduced in some way, along with 80 percent of British Columbians deciding that the increased interest and high fees make it harder for students to continue or finish their degrees.

The CFS found that the cost of education tax credits and savings schemes for the 2013-14 year was $2.83 billion, which exceeds the $2.46 billion loaned for The Canada Student Loan Program that same year.

“This $2.8 billion, if used instead for upfront grants, could allow every dollar loaned by the Canada Students Loans Program (CSLP) to be a non-repayable grant.”

Working with the CFS-BC’s Squash the Squeeze campaign, the VIUSU has collected over 2000 postcards that will be sent to the office of BC’s Minister of Advanced Education, Amrik Virk.