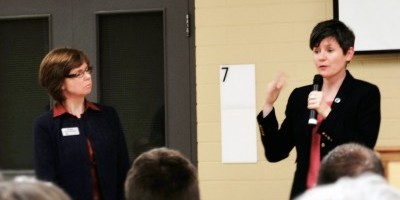 “NDP is the only party that has a bill to meet greenhouse gas emission targets and the only party recognized by the House of Commons that is committed to putting a price on carbon,” Leslie said.

In 2011, the NDP became the official opposition party with a proposition that promotes the Environment Assessment Act.

A trigger system, where assessments occur when an environmental concern arises, is no longer in place in Canada, Leslie said. Instead, there is now a list of things (bodies of water, fish species, etc.) that are protected.  This list can be changed by Cabinet.

“Many things aren’t on the list,” said Leslie. For example, there have been changes to navigable water laws.

“The list of water protected used to protect everything that could float a canoe,” Leslie said. “Now, 99.9 percent of rivers and lakes in Canada are not protected.”

Leslie also stated that changes in budgets have heavily reduced the amount of environment checks per year. She then stated that Canada can have a successful economy while still being sustainable.

“There are more jobs in green energy sectors than oil sands,” she said. “Why are we making these investments into oil sands but not into green strategies?”

Leslie also addressed the NDP’s belief that there should be carbon pricing that uses a cap and trade mechanism. This means there is a guaranteed legal limit on the quantity of carbon Canada can emit each year, Leslie said.

“This will ensure justice, both social and economic,” she said. “We would then take revenues from it and invest it in programs we all benefit from.”

Malcolmson said she believes students and young people often live more sustainable lives and are therefore environmentally conscious. She hopes they will think about the environment and proportional representation by voting in the next election.

“Proportional representation resonates with students because they want their vote to count,” Malcolmson said.

“At [a Fairvote Canada event at the Vault Cafe] I asked who voted and only half put their hand up,” Malcolmson said. “When you look at other countries that use it, you see more women, minorities, and young people represented.”

More on the environment in the Nav