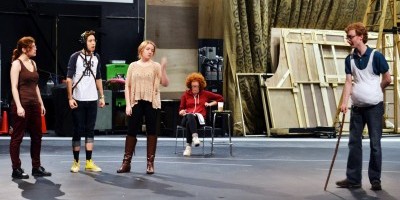 The theatre department is taking on a modernized version of an Italian commedia dell’arte play, A Servant of Two Masters, for its spring production.

Commedia dell’arte is a form of Italian comedy that originated in the 16th century and was characterized by masked characters. But the department’s version has been modified by losing the masks, and adding more modern elements.

The play’s director, Ross Desprez, found a formal English translation of the original Italian script and re-wrote it into more modern, conversational language. The play is a take on an old-fashioned farce with lots of bright costumes and a cartoon-y, colourful set, assistant director Belle Warner said.

The actors have worked hard since the beginning of February, building sets themselves and rehearsing regularly. They have also coordinated with some professionals in the production of the play.

“We get to work with tech and lighting people, as well as a costume designer,” Warner said. “That’s a good experience to have.”

“Clarice’s dream of marrying her true love is shattered when the man she was originally promised to seemingly returns from the dead. What no one realizes is that the returned fiancé, Federigo, is actually his sister Beatrice in disguise. Beatrice’s plans work well until her sneaky servant, the trickster Truffaldino, signs on to serve two masters in the hope of double wages and double dinners. Chaos and hilarity ensue.”

“I believe this play is so attractive because it holds a little bit of something for everyone,” Kraft said. “There is slapstick humour, and academic humour intertwined.”

The show runs from March 5-14 at the Malsapina Theatre. Tickets are $10 for students and seniors, and $12 for adults.