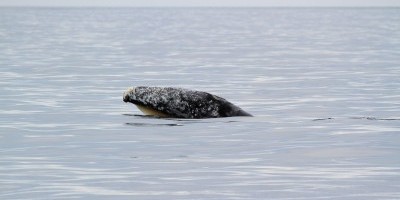 Perhaps it’s the sheer size of the ocean that makes it so alluring to most people, or the fact that, while it makes up more than three quarters of the surface of our planet, we know so little about what’s living in it, and where. For as long as humans have been traveling on or around the sea, we’ve been obsessed with what it provides, and the mysteries within. Stories of Serpents and Kraken have haunted mariners for centuries. Seafarers off our coast are no different. Those involved in the commercial whaling industry often referred to the “Devil Fish,” a beast who lashed out so violently when speared that hunters’ boats were regularly smashed to bits. Today, these Devil Fish are known as the gray whale, one of the most prominent marine mammals on our coastline, and they have an amazing story.

The history of the gray whale parallels many other species in our oceans. Historically, it is believed there were similar populations in all of the oceans of the world, each making warm-cold water migrations much like our Eastern Pacific population today. For thousands of years, small-scale aboriginal hunts, including those on our coast, played an important role in the shaping of their population: for the Nuu-Chah-Nulth nations along Vancouver Island’s west coast, the annual taking of one whale per village as a food source was important as a rite of passage for young men. Whaling at this scale was never a threat to the gray whale population. But beginning in the 1500s and reaching its peak in the 20th century, the international commercial whaling industry had serious negative impacts on global whale numbers. Today, this Eastern Pacific group is the only population of gray whales left on the planet that has rebounded to anywhere close to pre-commercial hunting numbers.

Having fought their way back from the brink of extinction, they have recovered their numbers off our coast and perform the largest migration of any mammal on earth, swimming 9000 kms annually from Alaska to the Baja Peninsula. Their presence off the West Coast of Vancouver Island is also an important indication that spring is on the way, and offers one of the most exciting seasonal happenings locally.

With large individuals measuring 15 metres long and weighing 30 tonnes, the gray whale is one of the largest animals we see in this part of the Pacific. With a population of approximately 20 thousand individuals in the eastern North Pacific Ocean, these whales get their name from the mottled-grey patching that develops on their skin, scar marks that develop over time from an array of parasites living in and under the skin. The gray whale, like most marine mammals, has a thick layer of blubber beneath its skin to keep it warm in cooler waters. But the young are born without this layer. To keep the calves from perishing in the colder waters of the north, the entire population migrates about halfway down Mexico’s Baja Peninsula to one of a few warm water lagoons where pregnant mothers give birth. The unladen conceive here too.

While perfect for birthing, these southern waters have essentially no food, so by late January or mid-February the population begins to move northward again, needing to feed. Having gone three or four months without eating, weight loss becomes a serious threat, driving the population north.

Like most of the world’s large whales, the gray whale is a baleen whale; it lacks teeth but has a “filter” of long skinny plates hanging off its top jaw. Imagine your top teeth being replaced with a curved hair comb, and you get the picture. Gray whales have numerous techniques for feeding, like skimming the surface of the water or sucking at crevasses in reefs, but most commonly they will scoop great mouthfuls of sand or mud from the bottom of bays and filter out small shellfish and larvae. On a good day these huge animals eat more than one thousand kilograms of food made up of morsels that are smaller than your pinky fingernail. In pursuit of this food source, gray whales swim north to their feeding grounds in the springtime where they will stay until the fall sends them south again.

In March and April, when we see gray whales off our coast, the vast majority of them are bound for the Bearing and Chukchi Seas, in search of the shallow, productive sandy bays they will feed in. But every summer a small group of resident animals stop their migration early and spend their summers feeding in the bays and coastlines of Vancouver Island’s West Coast, and this is where they are most easily viewed over the course of the summer season. From the reefs in the Broken Group in Barkley Sound all the way up the coast towards Cape Scott, roughly 150 to 200 gray whales spend their summer here, feeding and taking part in important pre-mating rituals. This small sub-population has been the subject of much study by conservationists and biologists over the last couple of decades. Nowhere else on their entire migratory route do groups of animals return so consistently, year after year, while the rest of the population continues on to Alaska. Chances are, they’re here exploiting some unique food sources. Attempts have been made to tie the presence of productive old growth forest ecosystems to the presence of these resident gray whales with some success. Regardless of why, their summer-time presence on our coast is both interesting and exciting.

So, will you see a gray whale in the waters off Nanaimo? Possibly, but it’s unlikely. Every couple years, one or two might make a quick stop through the Gulf Islands and into the Salish Sea before continuing up the West Coast, but your best bet to see one of these animals in the wild is to visit a coastal hotspot like Ucluelet or Tofino. Beginning in early March, thousands of locals and visitors line the shorelines of these communities where onlookers can watch dozens, even hundreds, of whales each day swim by on their way up the coast. Charter companies start their season at this time, offering float plane and boat trips to see the whales and other wildlife in the region. Also around the corner is season 29 of the Pacific Rim Whale Festival, which celebrates the annual return of Vancouver Island’s resident gray whales, as well as the other species that make up our amazing coastal ecosystems. Running March 14 to 22, the festival is full of wildlife expeditions, nature walks, kids’ events, and evening concerts.

The VIU Deep Bay Marine Field Station, just 45 minutes north of Nanaimo, is putting together a project called “Raise a Whale.” Approximately five years ago, a gray whale carcass was found in Sooke, BC and buried soon after. This past year the remains were dug up and all the bones were gathered and cleaned. Now the project is in its final stages, with volunteers and scientists working hard, repairing the bones before reconstructing and mounting it in the Field Station building. Once completed, the public will be able to come and view this incredible project up close.

Closer to home, the VIU Museum of Natural History in bldg 370, run by a group of passionate students and faculty members, features a great collection of gray whale bones and baleen, as well as artifacts and examples of many other species of animals and plants found around Vancouver Island.

New displays are being put together weekly, and throughout the springtime the museum team will be holding draws for fun prizes. The museum is open to students and the public on Mondays from 10:30 am to 12:30 pm, Tuesdays from 1:30 to 2:30 pm, and Thursdays from 11:30 am to 1:30 pm. More information is available online and on their Facebook page.