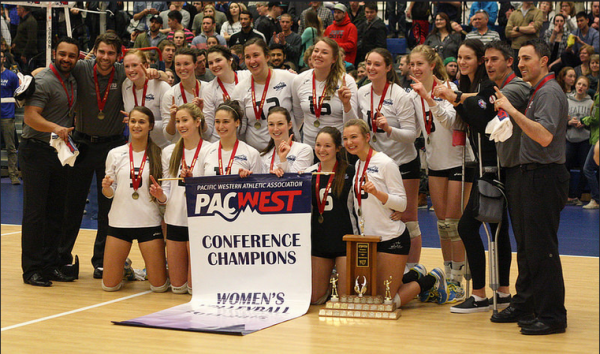 On Saturday, February 28, the Mariners’ women’s volleyball team came out on top at Camosun College, taking home the provincial championship. The finals began with a nail-biting two lost sets, with the Camosun College Chargers leading 2-0. The Mariners fought back, coming together as a team to win the third set.

“Once we won the third,” Megan Roselund said, “I knew that we were gonna win.”

Luckily, the game changed when the women knew they couldn’t lose, taking over the game and winning the conference.

Two members of the conference champion team sat down with The Navigator to discuss their win, the underdog season and even their favourite breakfast cereal. Ashley Van Acken, one of the teams’ captains, divulged the reason the Mariners’ didn’t give the game away.

“We were re-sparked,” Van Acken said, “Integrity and fight came, that we didn’t have in the beginning.”

For many of the rookies on the team, this was their first time ever playing in a final game, bringing a lot of new nerves to the court.

“It was like our pride took over,” Roselund said.

After celebrating with parents and friends, the girls returned to their locker room.

“We played Started from the Bottom by Drake,” Roselund said. The song, while it represented their recent season, is not the team’s song.

Shane Hyde, the Mariners’ coach, chooses a team song each year to connect the girls before each game. This year, Dream On by Aerosmith has played after each semi-circle, warm-up and pre-game talk.

“He’s so superstitious,” Van Acken said, “that if someone forgets the music and we lose, he blames it on the music.”

The girls, who began the season with four forfeited games and their share of losses, attribute their success to the pre-game rituals and the team trip to San Diego after Christmas.

Roselund said before the trip, the team was so new, but after spending ten days in California, “practices got more calm and people started rising up to their positions.”

The team will travel to Quebec for CCAA National Championships, March 12-14. Look forward to the next issue of the paper for a follow-up interview with the Mariners out Wednesday!