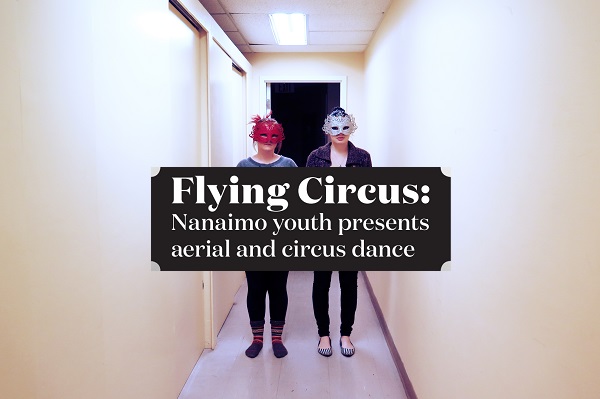 Crimson Coast Dance Society and The Body Talk program present The Flying Circus—a week-long aerial and circus dance workshop during the SD68 spring break between Monday, March 23 and Friday, March 27 at the Romper Room Climbing Centre. The event will round off with a gala performance on the Saturday night.

Organized by the Crimson Coast’s Body Talk Cru, the skill development workshop brings two established performance companies. Aerosia Aerial will introduce the students and audiences to aerial dance, and Vesta Fire will teach the many aspects of circus performance.

“The show on the last evening will be woven in a very circus-y kind of way and a fantasy theme,” Crimson Coast’s founder and artistic director Holly Bright says.

The Body Talk Cru is formed by a group of teens working under Bright’s guidance. The program started in 2003 when Bright, seeing the lack of youth involved in the local dance events, reached out to the community and recruited a group of teenagers to organize their own events according to their taste and preferences.

“The teens want to do their own thing. They didn’t want to dance with their little siblings, or mom and dad,” Bright explains the reason why the workshop is divided into two groups: adults and children, and teenagers.

Most of the current Cru members have stayed with the program for four years.

“They come in when they’re 13 or 14, and they inevitably stay until they finish high school,” Bright says. “Once you’re in, you become a family member.”

Originally calling themselves “The Council Of Cool,” but eventually changing their title to “Cru,” the team presented workshop suggestions to Bright who facilitated the platform and guided them through the process. Her aim, however, was to give the teens as free a hand as possible to teach them independence and responsibility.

“When they told me what they’d like, I said ‘this is crazy. But you guys do it. I’m going to make it possible for you to do whatever you want to do,’” she recalls the beginnings of the process, which gradually became a mentorship in arts administration and event planning.

“It’s kind of a job the society looks for the ‘wiser, older adults’ to do,” Cru member Chantel, 16, says. “Then you see these teens coming in, making posters, and getting money for programs. I really enjoy that.”

The skills she has gained are not normally portrayed every day in the teenage environment. Individual tasks involve selecting the genres and artists, making posters, marketing and communicating with the media, and wrapping up the event at the end, all the while attending the dance classes they organized.

“They always pick hip hop. From the very start, all they want is hip hop,” Bright says. “We’re a contemporary dance company, and I love hip hop, because I know that’s what interests them. But this also has to work for us, our sponsors, and people who support us.”

The solution she offered was choosing two dance genres: one can be anything the group wants, the other should be cultural or unusual.

The Cru chose aerial and circus because, as Chantel says, “it’s something way out of the box. We did hip hop almost every year, so we wanted something completely different.”

Emma, 17, agrees: “You can go anywhere for a hip hop camp, but where do you get aerial dance and learn how to dance with lights and fire?”

There had been an interest in bringing aerial dance into the program for several years. The Cru selected Aerosia, a Vancouver-based company, whose members are established mountain climbers and dance artists who work with silks and climbing harnesses. Crimson Coast has worked with the company in the past—organizing their show at the Port Theatre, where the artists danced down the outside walls of the building in 2005. The content consideration is different from aerial dancers who perform in circus settings.

“For Aerosia, it’s not so much about spectacle as it is about making art, ”Bright says. “Their dance is very magical and has some depth to it. When they’re dancing down the side of a building, they usually start really high at the top, then they’re jumping and doing back flips, running backwards, taking off, and soaring sideways. They make it seem gravity-less; it feels like a dream state.”

For the circus portion of the workshop, Cru selected Vesta Fire, who specialize in stilt performances and also fire spinning with hoops, but will offer easier options for students during the workshop. Vesta’s founder Karina Strong and her partner-in-dance Kat perform and teach circus classes around town. (Read more about Vesta in the following interview on page 16)

Jessina, 16, says the “wow” factor of these two genres will possibly bring a big crowd.

“There’s a lot of people in the hip hop community, but you never really hear of rock climbers,” she says. “It will be intimidating because it’s heights, fire—something out of the usual—but also it’s intriguing and you’ll want to try it.”

Bright meets with Cru for weekly business and creation meetings to check on the progress and see what the team or the production requires. She helped hire sound and lighting technicians, costumers and dramaturge to work with Cru on the development of the piece.

“This is the first time we’ve ever done this,” she says. “The program is always changing because we always get feedback from the team, and we try to do what they want us to do. As they evolve, we evolve.”

The Body Talk brings another change into the schedule this year. It is the first time the Cru have become producers as much as organizers, and create their own play instead of adapting a well-known work. In each of the seven scenes, the Cru members will perform as multiple characters. Most importantly, all decisions and creative steps come from the group as a whole.

“The whole point of Body Talk is that there is no real leader,” Felix, 16, says. “Everybody is equal, makes their own part of the play, and have their own scenes they’ve created. Some of us are more dominant than others and have more specific ideas of how details should play out.  But in the end, everybody is in charge.”

Felix joined the Cru last year and says he hopes to use his creative skills to help put the performance together.

“I look forward to the play more than the workshop, because I get to show people a piece of my ideas. I work very much based on that.”

Rose, 16, on the other hand, is excited about the workshop.

“Our performance will be really fun, but I mean, aerial and circus, man! Hanging off the ropes at the Romper Room and hula hooping with those LED lights!”

Each workshop class can take up to 24 students and is based on developing individual skill levels.

“You can enter it from many different levels and life experiences,” Bright explains the popularity of aerial and circus dance genres. “As long as you’re physical, strong, and healthy, you can do it. You don’t have to have done it since you were seven years old and trained every day. Contemporary or ballet dancers know nothing but that art form if they intend to be successful—it’s an entire life commitment for them—but you can enter these genres at any point in life or skill level. All you have to do for aerial is be a climber. And don’t get me wrong, these people have really developed their skill, but everyone can enjoy their own experience up to their level.”

Participation in Body Talk may be a life changing experience for all parties involved. Some of the Cru members even decided to take a different career or education path, such as switching to the Theatre program at VIU.

Emma says she wants to work in performing arts, but would have never realized what her passion was without Body Talk.

“If I weren’t here, I’d be at the spring hockey camp,” she says. “I have an athletic background in the family, and if I’d never found Body Talk, I’d be doing hockey and not focusing on my career. And I feel that without that real insight the Body Talk has given me, I wouldn’t be able to say ‘hey, I know what to do. Let’s do it.’”

“It’s about following your passion in life,” Bright says. “You have to do what your heart is calling you to do, and if it doesn’t work out, go until you can’t take one more step. Then you can let that go. But if you never take that choice, you’ll never know.”

Aside from the practical experience, the Cru also get their volunteer hours for high school, gain employment skills, and receive reference letters and a honorarium of $200.

“Meeting new people and having this contact list on the resume is always good,” adds Jessina, who enjoys doing the backstage management and the graphic design portion of the work.

For Felix, it is an opportunity to meet and work with people he would normally never meet.

“I learned that you can be a part of something bigger that people can accept, and that they will listen to you,”he says. “You don’t have many places like that.”

Workshop participants, on the other hand, usually leave with a new experience, having pushed their boundaries and stepped out of their comfort zone.

“Creativity, movement, and art can be shared in many ways with lots of different kinds of people you would never normally choose,” Bright says. “It broadens horizons and it’s fun. The world is challenging or scary at times. Making art out of climbing or circus, taking it to another level, and sharing the experience holds a place for beauty. For me, that’s the value, the arts.”

The Body Talk workshops are open to the public and will be held at the Romper Room Climbing Centre between March 23 and 27. Teen classes will take place from 11 am-2 pm, all-ages from 5:30 – 8:30 pm. The final performance will take place on Saturday, March 28 at 7:30 pm. Tickets and workshop passes along with price information online.