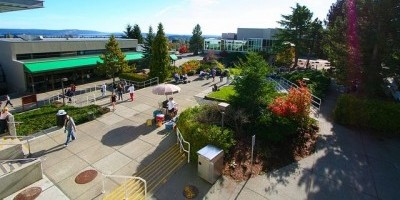 “VIU is a commuter campus, and a lot of people think we don’t know our everyday students very well,” Conrad said. “It helps make the campus friendlier.”

Inspired by the popular Humans of New York blog, Humans of VIU’s Facebook page features photos of students with quotes that aim to tell their own personal stories.

Conrad believes the founder of Humans of New York would be pleased to see the many follower pages that have been created.

“It’s so applicable in so many ways and places,” Conrad said.

The page is still growing and some people, unfamiliar with Humans of New York, still see it as a brand new concept, Conrad said.

Sometimes it can be difficult to strike up conversations with random people. “But I try to keep it light-hearted,” Conrad said.

Conrad wants the page to grow so more people will be familiar with it. He hopes it will act as a conversation starter when people recognize somebody who was featured on the page.

“Each post is increasingly popular,” Conrad said. With just over 300 likes, he hopes to reach 500 likes this semester.

Conrad is in his fourth year of Digital Media Studies and Business and is a student ambassador, so he meets many different students. He started the page in January with the help of a joint initiative between the Communication and Marketing Office.

Featured students are often asked about their goals; when asked about his own, Conrad said he wants to work in media production, communications, or marketing. “Interacting with people really interests me,” he said.

While Conrad will be graduating at the end of the semester, he hopes the page will be able to grow and continue for a long time.